In Metamorphoses Ovid tells us about Echo and Narcissus. He seems to have invented the tale, although the legends from which he weaves it were already parts of Greek mythology.

The story starts with a dispute between Jupiter, king of the gods, and his wife Juno. Jupiter claims that women get more pleasure from sex than men do. Juno disagrees. Tiresias is the obvious person to ask, having been both a man and a woman in his time. Transgender is no new thing. Tiresias agrees with Jupiter. Juno, annoyed with the reply, strikes Tiresias blind. Jupiter, in compensation, gives him the power of prophecy. The Tiresias myth is Greek not Roman, but Ovid is telling the story in Latin, and so Zeus and Hera become Jupiter and Juno. The Greeks had other explanations for Tiresias’s blindness. In one version, for example, it is a punishment for chancing on Athena bathing, the prophetic power again compensation.

Many come to consult Tiresias, among them the naiad Liriope, who has borne a son, Narcissus, to the river god Cephissus. Will Narcissus live long, she asks. Tiresias answers “si se non noverit” (“if he does not come to know himself”). A strange prophecy, given the famous maxim, inscribed, Pausanias tells us, in the forecourt of the Temple of Apollo at Delphi, γνῶθι σεαυτόν, “know thyself”. The meaning of Tiresias’s prophecy emerges later.

Echo’s story, as told by Ovid, also figures Juno. Finding her errant husband dallying with nymphs on Mount Helicon, she is diverted by Echo’s chatter, allowing the others to escape. But Juno is not fooled. Making the punishment fit the crime, she condemns Echo to lose her power of speech, except for repeating words that she has just heard.

And now the stories of Echo and Narcissus converge (picture). She falls in love with him, but he rejects her, as he does all other suitors. She pines away, leaving her disembodied voice to echo through the woods and hills. Nemesis then sees to it that Narcissus falls in love with his own beautiful reflection in a pool of water. Like Echo, he pines away, his love unrequited. When he dies he metamorphoses into a flower, its white petals clustered round a cup of gold. 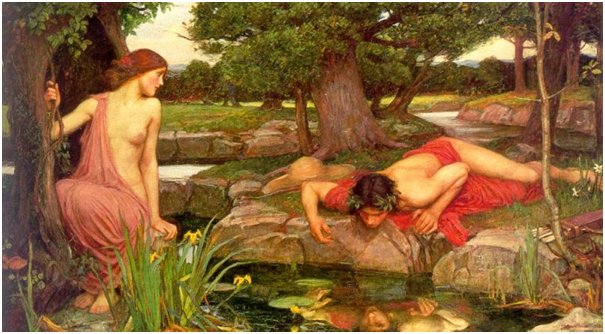 Pliny and Plutarch explained Narcissus’s name post hoc, deriving it from the Greek words νάρκη and νάρκησις, numbness and torpor, from which we get narcosis, narcotics, and narcolepsy. Narcosine is another name for noscapine, a non-analgesic opium alkaloid, which has been used as a cough suppressant and which may have anticancer properties.

“Narcissism”, simply meaning vanity, is first recorded in an 1822 letter of Samuel Taylor Coleridge: “I am glad to be able to correct my fears as far as public Balls, Concerts, and Time-murder in Narcissism.” In children narcissism (primary narcissism) is normal; in adults (secondary narcissism) it is not. According to DSM-5, Narcissistic Personality Disorder is characterised by impairment of self functioning (identity or self-direction) and interpersonal functioning (empathy or intimacy), with attention seeking behaviour and grandiosity. The English term was first used by Havelock Ellis in Studies in the Psychology of Sex (1905): “Since I called attention to this form of auto-erotism (Alienist and Neurologist, April, 1898), several writers have discussed the condition, especially Näcke, who, following out the suggestion, terms the condition Narcissism.” Ellis’s term was “narcissus-like”. Paul Näcke’s term “Narzißmus” (Psychiatrische en Neurologische Bladen, 1899) referred to autoerotic masturbation—“sex with someone I love”, as Woody Allen described it in Annie Hall.

Eliza Gregory Wilkins, in an extensive review of references to “know thyself” in Greek and Latin literature (γνῶθι σεαυτόν and “nosce teipsum”), interpreted the phrase variously, including know what you can and cannot do, know your place, know the limits of your wisdom, know your own faults, know you are mortal, know your own soul. But “know thyself” doesn’t mean “love thyself”, and another famous Delphic maxim, μηδὲν ἄγαν, warns “nothing in excess”. Narcissus’s fate, as Tiresias foretold, was to know himself too well in one sense and not well enough in another. Fictional examples of narcissists include Dorian Gray, Jay Gatsby, and Narcissa Malfoy, cinematic ones Federico Fellini in 8½ and Woody Allen in Stardust Memories. Real life ones include many narcissistic politicians, businessmen, and celebrities, some of whose identities no doubt readily spring to mind.

Thanks to Amanda Adler for raising the subject.