Deborah Cohen recently reported in The BMJ that George Freeman, the UK sciences minister, whose responsibilities include the Medicines and Healthcare products Regulatory Agency (MHRA) and the National Institute for Health and Care Excellence (NICE), wrote to the EU’s research, science, and innovation commissioner, Carlos Moedas, last year urging him to “tackle the increasingly precautionary ‘anti-science’ trend in EU legislation” that he said was stifling innovation. [I quote almost verbatim from her article.] Among the minister’s concerns was the current restrictive authorisation process on health claims about nutraceuticals.

There is, perhaps, a case to be made for easing restrictions on the development and marketing of new medicines, although there is always a danger that shortcuts and fast tracking will lead to the emergence of unforeseen harms, with opportunity costs that impair drug development rather than enhancing it. Nutraceuticals, however, are different.

There is a relatively small set of neologisms—words or phrases that are newly coined, as the Oxford English Dictionary (OED) puts it—whose invention can be attributed to single individuals. “Nutraceuticals” is one of those. It was invented in 1989, from “nutrition” + “pharmaceutical”, by Stephen L DeFelice, who established The Foundation for Innovation in Medicine in 1976. Use of the word, judged from frequencies in papers indexed in Pubmed, has increased steeply since about 2000 (see figure). 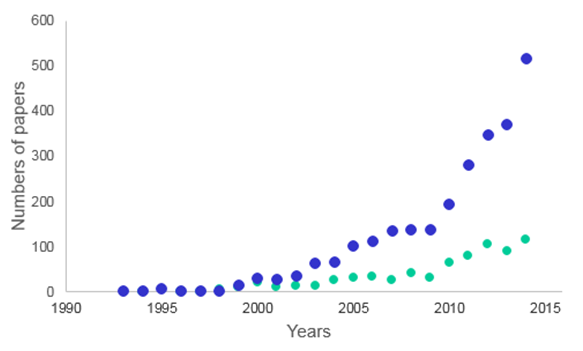 In an interview with Sheldon Baker on 28 October 2011, DeFelice defined a nutraceutical as “a food or part of a food, such as a dietary supplement, that has a medical or health benefit, including the prevention and treatment of disease”. The OED defines a nutraceutical as “a foodstuff, food additive, or dietary supplement that has beneficial physiological effects but is not essential to the diet. Also called functional food”. In the proposed US Nutraceutical Research and Education Act, which was presented to the House of Representatives in the first session of the 106th Congress of 1999–2000 but not promulgated, a nutraceutical was defined as “a dietary supplement, food, or medical food . . . that (1) possesses health benefits; and (2) is safe for human consumption in such quantity, and with such frequency, as require to realize such properties”.

There are no internationally agreed definitions of “nutraceutical” and “functional food”. In a detailed review I concluded that these terms are vague, nondiscriminatory, and unhelpful, and that the evidence suggests that they should be abandoned. It is also inappropriate to refer to them as “dietary supplements”, a term that would be better restricted to compounds used in the therapy or prevention of deficiencies. Here I merely want to conclude with what Stephen DeFelice, the inventor of the word “nutraceutical”, said in a lecture about nutraceuticals in 2014: “Many studies now have been published on dietary supplements and diets . . . and most of them have proven that these things do not work. Not proven. The results of clinical studies have shown that they do not work. . . . I think, again I’m not sure, that the quest to demonstrate whether chronic administration, long term diet, long term supplementation, can prevent serious diseases . . . has come to an end.”

The word “nutrition” and related words comes from the IndoEuropean root [S]NAU, meaning to flow or let flow and therefore to suckle (nourish, nurse, nurture), to drip (snivel, snot, schnozzle, sniff, and snuff), or to swim. Nekton is a general term for animals that can swim; the sea nymphs naiads and nereids also swim. But nutraceuticals would be better sinking, not swimming.