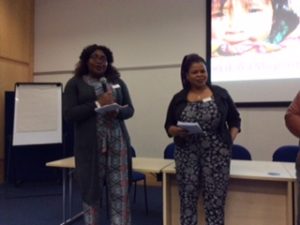 “My problem is your problem.” These were the words of a mother of four who has been waiting for a decision on her asylum claim for 17 years, and who was an attendee and speaker at the University of East Anglia’s (UEA) migrant health conference last Friday.

Her declaration was not a demand that the audience recognise or help with the challenges she has faced; she was explaining the attitude that had helped her to turn her life around after she arrived in the UK. Not being able to work, hardly being able to afford food for her children, and being away from the people she knew and loved was difficult. What gave her a sense of purpose and lifted her out of depression was finding an opportunity to offer something to a community. She took on roles supporting other migrants, participating in health research, and acting as a service user representative.

She spoke alongside two other women, and all three emphasised that they were not seeking empathy or even sympathy; rather, they tell their story in the hope that understanding will grow and better solutions and approaches will be found. You’ve faced traumas so terrible that you’ve decided to leave your family and your home country, and you’ve paid far more than you can afford to travel over many months; when you eventually arrive, do you find that the UK is the place of safety that you hoped for?

These women had ideas about how, simply and practically, we can provide better services for migrants and refugees. They also formed part of the group of “experts by experience” who added integrity and depth to plenaries and workshops.

Experts by experience
The conference introduced this concept of “experts by experience,” which emphasises that people who have lived through migration can bring insights and understanding that no degree or title could offer. They know what it can feel like to disclose a history that evokes emotional trauma, physical pain, or psychological distress. They know how valuable it can be when a clinician offers them time to explain their situation, an independent translator to avoid translating personal information through a friend or family member, or sensitivity to the difficulties that their story and situation in the UK present.

The variety of workshops highlighted the plethora of issues and approaches that need to be explored to improve refugee health: from child health to mental health, from translation across languages and cultures, to supporting survivors of torture.

From vulnerability to resilience
Every one of the experts by experience demonstrated enormous amounts of resilience, both in the stories that they told, and in the personal strength that they summoned to disclose—in front of an audience—details about issues from female genital mutilation (FGM) to trafficking to honour based violence. Angela Burnett of Freedom from Torture described how vulnerability is a characteristic of situations, not of individuals. These examples showed how people who have been in vulnerable situations often have great resilience, positivity, and adaptability. If we allow new residents in the UK to continue to build on these qualities, they can be healthy and generous members of our communities.

“Nobody plans to become a refugee”
The final speaker of the day explained how events in his home country had forced him to migrate. He had never planned to leave his home, and he couldn’t have imagined the challenges that he and his daughter would face before he was forced to embark on his journey.

With 59 million people displaced around the world and numbers rising rapidly, the specific health needs of migrants is not something that we can ignore. Consequently, the UEA’s conference on migrant health had an important role in bringing together key players to discuss how we can best address the obstacles that migrants face in maintaining their mental and physical health and accessing health services when they need them.

Competing interests: Sarah was the Green Party parliamentary candidate for Hull East in the 2015 elections.