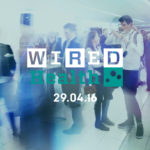 azine Wired held its annual health conference in London on 29 April, with 21 speakers presenting “the future of the healthcare and medical industries.” Thomas Macaulay was there for The BMJ, and presents his pick of the day’s sessions:

The threat of epidemics 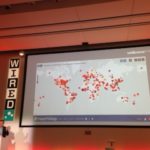 Wellcome Trust director Jeremy Farrar spent 18 years in Vietnam as director of Oxford University’s Clinical Research Unit, where his direct contact with epidemics such as SARS and bird flu developed his interest in emerging infections.

He recalled the houseboats and open sewers of his childhood in Singapore that had made way for what is now a high-tech city state. Changes in the environment, wildlife, people, nutrition, and technology have permanently altered global health epidemics. And with Sub-Saharan Africa and Asia having the world’s fastest growing transport network, a new danger for the global transmission of emerging infections has arisen.

Global health in the 21st century is interconnected, he said. What happens in Lagos today will impact London tomorrow. Such interconnectivity brings positives, but also breeds massive challenges through emerging pathogens.

What is needed is a focus on the global good instead of narrow nationalism. International institutions must be reformed to represent the international community, bridge the gap between the rich and the poor, and bring innovation into the mainstream.

“We are not passive observers, we can change the course of history,” Jeremy concluded. “But not if we keep working in the silos of the past.” 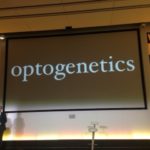 Gero Miesenböck, director of Oxford University’s Centre for Neural Circuits and Behaviour, discussed his work in optogenetics. The biological technique can help explain how the brain functions and activate neurons to control sleep.

Gero called the neural control of sleep “one of the great biological mysteries.” While we are awake, he said, something unknown accumulates, reaching a certain ceiling that put us to sleep. When we wake up, the cycle restarts anew. What causes that ceiling to be reached is what he hopes to discover.

Innovation in healthcare should be harnessed to “disrupt the NHS,” says Mahiben Maruthappu. As senior fellow to the NHS England chief executive Simon Stevens, it’s his job to help advise on how £100bn can be spent on innovations and technology to do this.

His hope, he said, is to take the NHS “from the Stone Age to the digital age in just five years.” While the NHS has performed well over recent years, an aging population, lifestyle changes, and financial pressures have created new problems that create an uncertain future, he added. A radical upgrade in prevention, better integration of care, and a focus on efficiency was the three-pronged plan he proposed to preserve the future of the NHS.

Maruthappu told Wired Health that innovation would play a particularly prominent part in his vision of improved efficiency in through genomics and personalised medicine, data and digital technology, and hardware and wearables.

Together they can create more tailored treatment, use big data to make the health system proactive rather than reactive, digitally slice through costs, create a new form of dialogue, and provide more interconnected care, he added.

There is also need for organisational change to provide the breathing space to explore new ways of working, Maruthappu said. “Innovation,” he added, “can straddle fantasy and financial restraints.” His vision is of tech companies, entrepreneurs, and clinicians all working together “to create an open-platform NHS that’s open for business.” 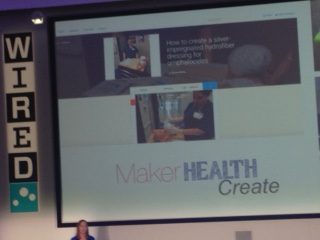 The word “innovation” normally triggers images of high-tech inventions. But it also applies to the inventive use of traditional devices. At the Massachusetts Institute of Technology’s (MIT) Little Devices group, Anna Young is developing the means to evolve these devices in healthcare.

Calling herself “a medical device archaeologist,” Young believes that innovation comes from all levels. Nurses are often those providing the most innovative, and affordable, healthcare hacks. She calls these innovators “MakerNURSEs”.

Her team identified the tools they used, the way their use was communicated, and the motivating factors behind how the nurses use them.

“What if we brought our tools from the lab and MIT into the hospital?” she asked. In autumn last year, Little Devices did just that, by launching the first “hospital maker space” in the USA, in Gaveston, Texas. The space provides a suite of materials, including a 3D printer, laser cutter, and hand tools. By teaching a nurse to use the technology, they can design prototypes developed from their own ideas and based on working experience.

They’ve already seen a tremendous amount of innovations, from modifications to existing devices to brand new ideas. They’ve ranged from heat extremity warning devices, to sensors on toilets to inform them when a patient at risk of falls is getting up.

The aim is not only to talk about these ideas, but to make them real and bring them to into practice. There are two steps to do this, Anna said, encouraging a “maker mind” that empowers people to pursue their ideas, and then giving them the space and tools to implement the ideas.

Among the designs at Little Devices is a construction kit for diagnostics that connects like Lego on a grid to allow makers to create DIY tests for all manner of diseases. What these kits are used for is up to the individuals. In this world of “open diagnostics,” great medicine can come from “democratising” healthcare technology.

Across the Pacific Ocean from the Little Devices Lab in Massachusetts, BGI Genomics is revolutionising genetic sequencing from its headquarters. The company’s genetic research projects in Shenzhen have included sequencing SARS for the first time in a Chinese institution and sequencing the first giant pandagenome.

“We’re sequencing everything,” said BGI’s chief executive Ye Yin. “Animals, plants, humans.” Today, the group counts more than 5000 researchers among its staff who are from 62 different countries. In 2014 BGI was reported to be producing 500 cloned pigs a year to test new medicines.

Ye Yin’s personal favourite genome to sequence is the baboon. He envisions the baboon heart being transplanted into humans in the near future. While ethical concerns could limit such developments, financial concerns are diminishing. As the costs for genome sequencing drop, the possibilities are only growing.

Medicine at the cellular level

Supplies of safe blood for transfusion are becoming hard to find. An aging population will require more blood for treatment for cancer, chronic diseases, and for surgery. And proportionally, the number of young healthy donors is going down. How can we provide the blood for the needs of the future?

Jo Mountford and the Scottish National Blood Transfusion Service might have the answer: growing blood in the lab. Their means of providing these evolved from a request from the US Department of Defense for a machine that could be dropped from a helicopter to transfuse blood on the battlefield from a renewable stem cell source.

The US Defense Advanced Research Projects Agency rejected their proposal to do this, but thought it could be used for normal blood transfusion use. With Wellcome Trust funding, the Scottish National Blood Transfusion Service began to develop the equipment.

Human embryos were the obvious option for producing red blood cells from stem cells. But ethical concerns limit their potential. Today, skin from any part of the body can be converted into a population of cells that to all intents and purposes are identical to those of an embryo.

Jo was keen to emphasise that these “induced pluripotent stem cells” are not synthetic or artificial. They are the same cells that occur naturally in the human body, only they are are made in the lab “as nature.” Her team calls them “cultured red blood cells.”

We are entering “a new era of regenerative medicine underpinned by cellular therapies,” she said. Rather than treating patients with drugs, instead we’ll soon give back the cells and organs needed to treat diseases.

Wired Health 2016 ended with the announcement of the winning pitch from the BUPA Startup Stage. It was awarded to Sensely, a San Francisco start-up set up to make quality healthcare affordable.  Ivana Schnur, the physician co-founder of the company, presented the app and described its function.

Sensely uses the avatar of a virtual nurse called Olivia as a patient portal for single access point to health services. After talking to Olivia about your symptoms, she can provide specific advice and schedule a doctor’s appointment.

The app provides telemedicine and medical device integration, and can monitor patient vitals and analyse facial expressions and voice. It can store patient records and pass on information to the doctor, who the patient can speak to on the same device.

Senseley, said Ivana, has the potential for vast savings and to “democratise healthcare.”

Thomas Macaulay is a newspaper journalism MA student at City University London. He previously worked in a research and development department of the NHS.