The Indo-European root UEID meant to look at or see, or something seen. And since seeing is believing, it also meant to know. The derived Latin verb videre meant to see, in various senses: to perceive with the eyes, to have vision, look at, notice, imagine, witness, meet, watch out, see to or provide, consider, and foresee; it also meant to ascertain by inquiry or consideration. Videns is the present participle, seeing; add the prefix e, meaning out, and you get evidens, perceptible to the senses or obvious to the understanding.

Evidence originally meant manifestation or display, and later clearness or the quality or condition of being evident; something that is in evidence is actually present or conspicuous. However, its more usual meanings derive from the general meaning of something that manifests or makes clear. For example (from the Oxford English Dictionary), “an appearance from which inferences may be drawn; an indication, mark, sign, token, trace” and “ground for belief; testimony or facts tending to prove or disprove any conclusion”.

The relation between pharmacological mechanisms and evidence is complicated and has two facets (figure). Firstly, there is evidence that a mechanism exists, ontological evidence, and evidence that the mechanism produces an associated outcome and how it does it, epistemic evidence. Together these two forms of evidence constitute evidence based mechanism.

Secondly, there are ways of using evidence based mechanisms to make evidential inferences. This is mechanism based evidence. 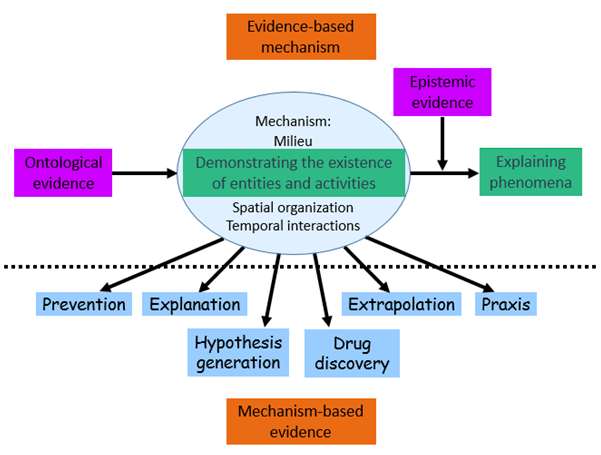 Figure: Evidence based mechanism (top section) describes two types of evidence that demonstrate the existence of mechanisms (ontological evidence) and knowledge about the effects they produce (epistemic evidence). Mechanism based evidence (bottom section) describes how pharmacological mechanisms can be used as evidence to inform prevention of adverse drug reactions, to explain outcomes, to extrapolate from clinical trials to clinical practice, to suggest practical procedures (praxis), to inform drug discovery, and to generate testable hypotheses

Mechanisms can be used evidentially in several ways:

Explanation Paradoxical and bidirectional drug effects can sometimes be explained mechanistically. For example, amiodarone can cause either hypo- or hyperthyroidism because of multiple competing effects, which include blockade of thyroid hormone entry into cells, inhibition of type 1 and type 2 5′-deiodinase, reduced T3 binding to its receptors, the Jod–Basedow effect, failure to escape from the Wolff-Chaikoff effect, thyroid cytotoxicity, and potentiation of thyroid autoimmunity. However, in attempting to explain newly described drug-event associations it is better to invoke mechanisms that have been well demonstrated before, rather than creating new explanations to fit—the proposed mechanism may deceive.

Extrapolation A mechanism that predicts an outcome in the individuals in a trial may be used to extrapolate that outcome to others, tackling the problem of external validity. For example, people with the HLA B*5701 genotype are at risk of rashes from abacavir in clinical studies; this knowledge has been used to prevent rashes in other patients during routine practice.

Praxis Mechanisms can suggest practical procedures. For example, the knowledge that blood flows from the periphery towards the heart, controlled by venous valves, predicts that it will be easier to sample blood from small veins by inserting the needle in a retrograde direction.

Drug discovery often starts with a mechanism that leads to the synthesis of a drug to affect that mechanism, although success does not always come from targeting a single mechanism.

Hypothesis generation Mechanisms can generate hypotheses, but such hypotheses must be formally tested. It is a capital mistake to use mechanisms to justify a course of action without first demonstrating that the hypothesised outcome really does occur. There are several cases in which mechanisms have been inappropriately used to justify methods of treatment without first testing them in a trial. Dr Benjamin Spock, for example, hypothesised that if a baby lying on its back vomited it might inhale the vomit and die. His advice to put babies to sleep prone was followed, until studies showed that we should in fact put babies “back to sleep”.