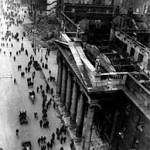 Earlier this year Ireland’s national broadcaster RTE screened a three part documentary to mark the 100th anniversary of the six day Easter Rising, the rebellion against British rule that led ultimately to the foundation of the Republic and the island’s partition to create Northern Ireland.

The programmes, screened by the BBC this week as part of its coverage of the anniversary, featured archive footage and interviews with historians alongside moving eyewitness accounts (filmed decades earlier) of some of the key personalities and their families.

Many of the soldiers had received no firearms training and had less than three months’ experience of military service. Some thought they had embarked on boats at Liverpool for the Western Front to serve in World War One, although, as the presenter of a separate BBC radio documentary points out, sending over soldiers from Britain “brought the Great War to Ireland.”

As they marched through Dublin under the supervision of inexperienced officers from English public schools, they came under fire from well trained rebels under the command of Eamon de Valera, a future Taoiseach (prime minister) and president of Ireland.

What happened to the casualties? The documentary says little, but a trawl through The BMJ archive from April and May 1916 provides some clues. The journal’s contents page reinforces its Anglocentric world view at the time, and Ireland’s status as a colonial territory.

A semi-regular “From our own correspondent” column entitled “Ireland” in the 29 April issue sits alongside one devoted to India. In fact, the rising is often cited for influencing subsequent anti-imperialist movements, including India’s.

There are no references to the tumultuous events triggered five days earlier. Tellingly, readers learn instead of Shakespeare’s English in Ulster (six of Ulster’s nine counties became Northern Ireland following partition, part of the United Kingdom), dating back to the migration of people from the Bard’s Warwickshire birthplace to occupy lands confiscated by the British in the reign of James I.

The author alludes to a Belfast gynaecologist’s use of the word “Child” or “chile” for a female infant (found in A Winter’s Tale), to patients having “indisgestion” (used in Julius Caesar), and the word “puke” (meaning to vomit) first used by Shakespeare 1599 or 1600.

May), but the journal quotes from John Healy, editor of The Irish Times, who describes how the Royal College of Surgeons in Ireland building in St Stephen’s Green (pictured right) served as the insurgents’ main ambulance depot and hospital, with 200 patients by 30 April.

The rebels were under the command of Michael Mallin, a former drummer in the British Army. He surrendered on 30 April and was executed by firing squad eight days later.

The BMJ article goes on to describe how, on the evening of 25 April 1916, “Sinn Feiners” were found inside a doctor’s house captured earlier by the insurgents.

The 13 May issue recounts how the Sinn Fein rebellion was quelled after a week, with the Prime Minister H H Asquith telling the House of Commons on 9 May of the 521 deaths among soldiers, policemen, and “loyal volunteers.”

That week’s despatch from Ireland adds: “There is no means of estimating how many of the ‘Sinn Feiners’ were wounded or killed as very few of them were brought to the hospitals, and many must have met their death in the parts of the city that were burnt.”

On 7 May J G Maxwell, commander in chief of the forces in Ireland, said: “I desire to express my sincere appreciation of the services rendered during the recent disturbances in Dublin by the medical, surgical, and nursing staff of many of the city hospitals, and in particular of the gallantry shown by those nurses who exposed themselves to heavy fire in attending to and removing the wounded.

“Also, to the members of the Red Cross and St John Ambulance Societies and the many medical men and private individuals who gave assistance in attending to the wounded, or placed their houses at the disposal of the military for use as dressing stations.

“In numerous instances these services were rendered at considerable personal risk, and under circumstances reflecting the greatest credit on those engaged in them.”