Exactly a hundred years ago, on 19 February 1916, a British soldier, Captain Robert French, died in London after injuries sustained in battle. The following account is taken from his medical notes (picture).

Captain French was wounded on 25 September 1915 while fighting with the 1st Battalion Royal Welch Fusiliers during the Battle of Loos. A bullet fired from about 200 yards away hit him in the back of the neck and he fell to the ground. He did not lose consciousness, but he developed a severe headache and lost the power of movement in his arms and legs. He was transported to a Casualty Clearing Station, where he remained for one or two nights, and was then taken by train to No 7 Stationary Hospital in Boulogne, where he stayed for 4 days. He was conscious but had some pain in the neck and could not feel anything in his legs, arms, or trunk and had no power of movement below the neck.

On 1 October, having been returned to Britain, he was admitted to the Empire Hospital for Officers at 69 Vincent Square, Westminster, London SW1. On 17 October a surgeon, Mr Walton, opened the Captain’s neck and found that the vertebral laminae, especially on the left side of the 5th cervical vertebra, were crushed and pressing on the cord. He removed the laminae of the 4th to 7th cervical vertebrae and noted that the cord then pulsated; he did not incise the dura. On December 15 it was noted that the knee jerks were present in both legs but the ankle jerks were absent; both plantar responses were flexor. There was still no movement at the wrists or fingers. He had occasional sweats on the left side of face, neck, and upper part of the chest and there was ptosis and enophthalmos of the left eye. A note on 16 January 1916 recorded that the ankle jerks were now present and that the knee jerks were now brisk; the plantar responses were both extensor and the abdominal reflexes were absent. He had periodic masseter clonus. His sensation and movements were still impaired. By now he had developed recurrent attacks of fever and chills, and examination of his urine showed the presence of Morgan-like bacilli. His condition progressively deteriorated during January and February. His temperature was high and his pulse rapid. He had “malarial sweats” in the upper part of his body and had presumably developed a septicaemia.

Some of the features of this description may require explanation. Morgan’s bacillus was described in The BMJ by a British bacteriologist Harry de R. Morgan in 1906, when he isolated it from the stools of infants with “summer diarrhea” (acute gastroenteritis). He and John Charles Grant Ledingham reviewed it in 1909. It was first named Morganella morganii and then in 1919 Bacillus morganii and in 1936 Proteus morganii. It has two subspecies, morganii and columbensis; the latter is now called Escherichia coli.

“Malarial sweats” presumably means drenching sweats; here the term is unlikely to refer to the periodicity of the sweats.

The ptosis and enophthalmos of the left eye suggest Horner’s syndrome, caused either by the injury or the operation on his neck. Since the eye signs in Horner’s syndrome are accompanied by lack of sweating on the same side of the face, his medical notes may have been wrong in noting that the bouts of sweating occurred on the left side. Horner’s syndrome (Bernard–Horner syndrome, to include Claude Bernard, or oculosympathetic palsy) was described in 1869 by Johann Friedrich Horner (1831–86); his paper was titled “Über eine Form von Ptosis” and it appeared in Klinische Monatsblätter für Augenheilkunde. Horner was a Swiss ophthalmologist who was born in Zurich. He also described the sex-linked nature of red–green colour blindness in 1876 and Horner–Tranter dots, white conjunctival infiltrates seen in vernal keratoconjunctivitis.

Captain French died on 19 February 1916. He was 22.
———————–
Thanks to Desmond Devitt of the Dragon School, Oxford, for drawing this case to my attention. Captain French was an old boy of the school, one of over 80 Old Dragons who were killed during the first World War. The experiences of other Old Dragons during WW1 can be followed at https://skipperswar.wordpress.com.

Picture: An extract from the medical notes of Captain R French during his last illness in the Empire Hospital for Officers in London, 1 October 1915 to 19 February 1916. 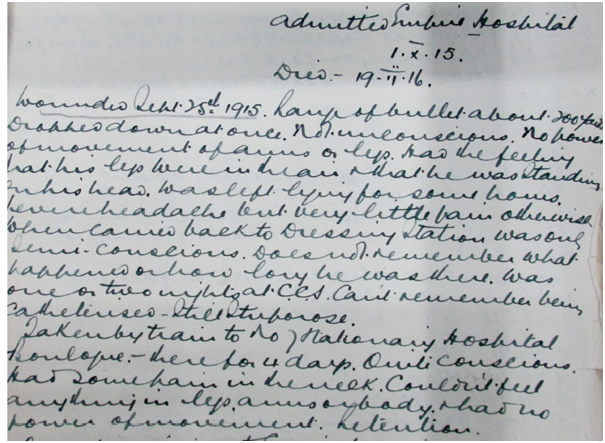