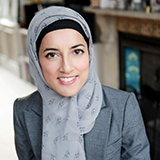 1.5 million children in Pakistan are blind. Many from eye diseases which are preventable and treatable. Often children don’t know they have a vision problem because they assume they see the way everyone around them sees. However childhood visual impairment or blindness has a huge impact—its effects last a lifetime and affect not just the individual, but their family and society.

With that background in mind I took two weeks of annual leave from working in eye clinics in London to spend two weeks working in eye clinics in rural Pakistan. It was my first visit to a hospital, equivalent to a small District General Hospital, to see what I could add to their already busy service. I was immediately inundated with patients. There were three main groups, those with completely intractable end stage disease, those with complex conditions that needed specialist referral and then the more “straightforward cases” which I could just about manage. As I got to the grips with the patients, the environment, and equipment, I began to notice just how undernourished most of the children looked. I began reading in the evenings after clinic and came across a wealth of UN, governmental, and aid agencies reports. The results weren’t particularly good.

Measles in the acute phase can lead to conjunctivitis, and will worsen vitamin A deficiency and its eye signs. However complications of measles in the eye can include keratitis, corneal ulcers, retinopathy, and optic neuritis. Measles is a leading cause of childhood blindness in developing countries where immunization programmes are less established.

During my time I went to see the neonatal and paediatric wards. As is common among non ophthalmic medical staff there is a reluctance to even think about eyes, never mind look into them. However there are a series of 10 basic key activities for primary care workers developed by WHO in 2002 to promote healthy eyes in children which include checking for red reflex for cataracts, cleaning the eyelids after birth, as well as making sure vitamin A is given and immunizations. [1] This was published over a decade ago, but how many primary care workers know about this or follow this? A pilot study from Tanzania showed how the teaching these 10 key activities by reproductive and child health workers improved their knowledge and behaviour. These 10 activities are straightforward and simple but can make a huge difference to the children who are checked and in these cases the primary care worker could be potentially helping to prevent blindness.

For the short remaining time I began prescribing vitamins and asking about immunizations and nutrition, something I would never consider in my practice at home. However, when it comes to keeping children’s eyes healthy, it starts with a healthy child—and in healthcare it starts with the primary health care worker looking after the child to also look after the child’s eyes.

1. World Health Organization: Report of a WHO consultation group. Geneva: A five year project for the prevention of childhood blindness; 2002.

Aeesha NJ Malik is an ophthalmology registrar currently based in London with a special interest in global health.