Bain, the global consultancy, produces what it calls “a pyramid of employee needs,” and on the day when junior doctors are striking it’s instructive to see how well the NHS is doing in meeting their needs.

The bottom of the pyramid is “satisfied employees,” and the very fact that junior doctors are striking suggests that they don’t even reach this level. The first requirement for satified employees is to have a safe work environment. Hospitals are certainly not safe for patients in that they are famously riskier than bungee jumping, and they are not entirely safe for junior doctors in that the work is stressful and risky. The fear is not so much that junior doctors will be harmed themselves but that they will harm patients and suffer disciplinary, legal, and emotional consequences. I’m assured that it’s not like when I was a junior doctor and would be the first to arrive at a cardiac arrest without any training, but “safe” may be a bold claim.

The next requirement is to “have the tools, training, and resources to do their job well.” The tools should be there, but often the long medical school training does not suit junior doctors well for day to day hospital practice; and many might argue that they don’t have the resources, particularly the time, to do the job well.

Satisfied employees “can get their jobs done efficiently, without excess bureaucracy.” Junior doctors may find the NHS overbureaucratic.

Finally, at the top of the pyramid junior doctors should feel that they “are valued and rewarded fairly.” This may be at the heart of their dissatisfaction. They don’t feel valued either by their hospitals, the NHS as a whole, their seniors in some cases, and certainly not by Jeremy Hunt. Some will at least feel valued by their patients, a great consolation. The emotional rewards can be considerable, and the financial rewards are not bad, although often not comparable to those of their contemporaries who have gone into banking and consulting.

The level above satisfied is “engaged,” and the first requirement is “to be part of an extraordinary team.” This must be the case for some junior doctors, but many move quickly from team to team and may never have the chance to feel part of the team.

The next requirement for engaged employees is “to have autonomy to do their jobs.” When I was a junior doctor we had too much autonomy, particularly in the middle of the night, but perhaps junior doctors feel the opposite—that they are cogs in a machine with little autonomy. The autonomy comes later in medicine.

Engaged employees “learn and grow every day,” and this should be the case for junior doctors, although they may think that they don’t have the chance to research and consolidate their learning.

To be engaged junior doctors should feel that they “make a difference and have an impact.” This will, I suspect, vary from job to job.

At the top of the pyramid are “inspired employees,” and their first requirement is “to get meaning and inspiration from their organisation’s mission.” This should be easy for junior doctors compared with their contemporaries in banking, but perhaps the mission of the NHS has become muddied since its inception in 1948. As I’ve argued before the “glory days of diagnose, treat, cure,” are largely gone. A third of the patients in British hospitals shouldn’t be there, and to be brutal at least some of the work is keeping alive patients who’d be better off dead. Plus with the long term conditions, the stuff of modern medicine, what the paients do matters much more than what the doctors do.

My conclusion sadly is that junior doctors don’t score well on the pyramid of enployee needs, but there is the potential for them to score very highly. The NHS should endeavour to make that happen. 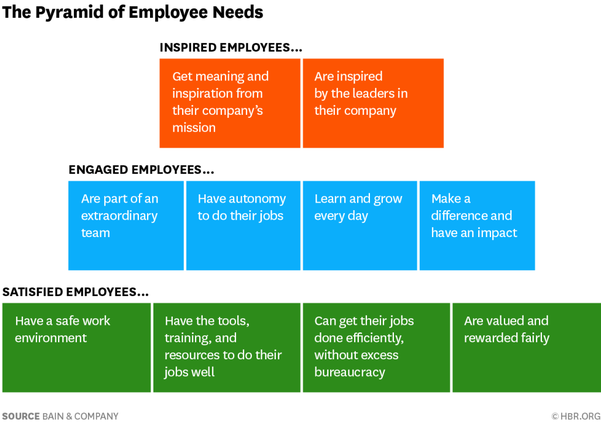