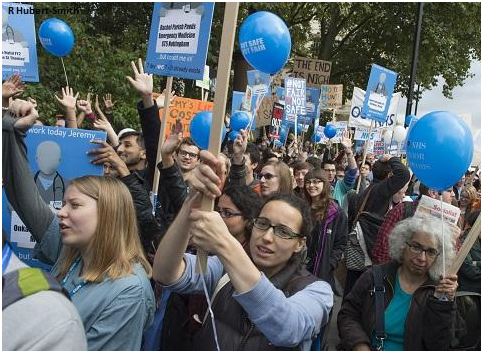 The junior doctors (pictured) vote to strike. The BMA seeks to resolve the dispute with Jeremy Hunt through the Advisory, Conciliation and Arbitration Service Acas. Not before time. He rejects the suggestion. Brinkmanship, perhaps, or fear of something (losing votes?), or perhaps hoping to destroy the system as an excuse to privatize the NHS? Then suddenly, and keeping company with the Chancellor of the Exchequer, a U-turn—he agrees.

So, while we wait, here’s clarification about conciliation and reconciliation. The hypothetical Indo-European root KEL meant to shout and hence to summon or instruct. The Roman calends was the day on which the new month was proclaimed, the start of the calendar. Accounts were settled on the calends and recorded on scrolls (cylinders), although “cylinder” probably comes from a different but similar root [S]KEL, curved, as in scolex and scoliosis. “The Greek calends” was never—Greek months had no calends. Marigolds (Calendula) were supposed to blossom on the calends. To intercalate was to insert an extra day or month in the calendar, and hence to interpolate in general. A paraclete (Greek παρακαλεῖν, to call for help) is an advocate or intercessor, typically the Holy Spirit, but it could describe patient advocates—paraclinical paracletes. It could also describe Acas, who will hear your claims (metathesizing KEL to KLA) and clarify possible solutions.

Reconciliation involves reunion or restoration, with harmony in mind; Mr Hunt might find that helpful to remember. In the 14th century, starting with relations between God and man, it meant the restoration of humanity to God’s favour, especially through Christ’s sacrifice. Then, extended to relations between man and man, it came to mean restoring estranged people or parties to friendship. It was later used to describe relations between different things as well; for example, resolving apparent discrepancies in bookkeeping accounts.

The latest variety is medicines (or medication) reconciliation. It is defined by the Institute for Healthcare Improvement (IHI) as “the process of identifying the most accurate list of a patient’s current medicines—including the name, dosage, frequency, and route—and comparing them to the current list in use, recognizing discrepancies, and documenting any changes, thus resulting in a complete list of medications, accurately communicated”. It is part of what has been called “information continuity”. “Harmonization” might be a better term, but the definition is well crafted, although it hasn’t yet made it into the OED.

Medication reconciliation seems to have been first described in 2003, with the observation that since many medication errors occur when a patient moves from one place to another, one strategy for reducing the risk of adverse reactions is “to reconcile the medication orders between the two transition points”. The IHI has developed a “Universal Medication Form” to help patients maintain their own records, and “med rec”, as some call it, is one of the five elements in the World Health Organization’s “High 5s” project.

The process has five steps: list the current medications; list the medications currently needed; compare the lists; make a new list based on the comparison; communicate the new list to the patient and caregivers. NHS Education for Scotland offers general practitioners a Medicines Reconciliation Care Bundle, and UK general practitioners can access a Medicines Reconciliation Tool on the Royal College of General Practitioners’ website as part of a Patient Safety Toolkit.

Patients who have their own electronic medical records can maintain reconciliated lists of their medications, enabling them to understand them better, and to link them to other information, such as test results. With so much online information becoming available, perhaps we should instead call the process medicines linkage.

Now what we need is proper doctor–government linkage and medical reconciliation.