The Indo-European root UER was not the only one that connoted twisting and turning. Others were PLEK, STREB, TERQ or TORQ, TERK, and UEI. Let’s start with PLEK, which in Greek gave πλεκ- and πλο(κ)-, in Latin plec- and plic-. It implied not only to twist, but other twisty actions as well—to braid or weave, to bend or fold. Folding also implied repetition.

DNA is plectonemic (Greek πλεκτός, twisted). Ploce (Greek πλοκή) is a rhetorical device in which the same word is repeated in the same sentence, often in a different sense or grammatical form. Here’s an example from Richard III (II:iv:61): “Make war upon themselves, brother to brother, Blood to blood, self against self.” Similar rhetorical devices include polyptoton, defined in the Oxford English Dictionary as “the repetition of a word in different cases or inflections within the same sentence”, as in Gertrude Stein’s description of Oakland, California, in Everybody’s Autobiography, “There’s no there there”, and antanaclasis, in which “the same word is repeated in a different, if not in a contrary signification”, as in Francis Bacon’s assertion, in The Advancement of Learning, that time is “the author of authors”.

Symploce is “repetition of one word or phrase at the beginning, and of another at the end, of successive clauses or sentence”. It is a combination of anaphora and epistrophe, which will have to wait for another time. I confess, however, that I have difficulty in distinguishing these different rhetorical devices from each other, and from other repetitious ones. What device is this, for example, from Ian McEwan’s Enduring Love (1997), in which he explores de Clérambault’s syndrome: “I don’t know you. I don’t know where you live or what you do, or who you are. I don’t particularly want to know either.”? Pallilogy perhaps?

A diploma, δίπλωμα in Greek, a double fold, is a piece of folded paper, like a letter of recommendation or diplomatic documents, which may have been folded over to conceal their contents. Germ cells are haploid, somatic cells diploid. Diplococci go round in pairs, being incompletely separated during cell division. The diploë is the bone that is enfolded by the hard dense inner and outer layers of the skull. Diplopagus refers to nearly completely conjoined symmetrical twins. Then there’s the particularly twisted variety of double vision, torsional diplopia. Aplotomy is an obsolete surgical term for a single, i.e. unrepeated, incision; the term is listed, along with several other words beginning with aplo-, in the New Sydenham Society Lexicon of Medicine and the Allied Sciences (1879). The only such word listed in the OED is aplome, a form of garnet with a supposedly simple crystalline structure.

Plica in Latin is a fold. Put semel, single, in front of that and you get simple and simplex. Would that Herpes simplex was as simple as its name suggests. A plexus, like the brachial, solar, or myenteric ones, is a network of nerves. A complex is a complicated and perplexing syndrome, such as those of Oedipus and Electra, consisting of “emotionally charged ideas or mental factors, unconsciously associated by the individual with a particular subject, arising from repressed instincts, fears, or desires and often resulting in mental abnormality” (OED). A duplex is a house with two parts; triplex is card or glass with three layers; and a multiplex cinema multiplies its screens. Complicate, explicate, implicate, replicate, supplicate, duplicate, triplicate, quadruplicate, quintuplicate, sextuplicate, octuplicate, decemplicate, and centuplicate—there’s no end to it, even though you can’t fold and refold a piece of paper more than 12 times, or 12-ply; paper, though pliable, can’t be infinitely pleated or plaited.

In The Odyssey, Homer tells us that Penelope compliantly plied her fingers (picture), weaving a shroud for her father-in-law Laertes by day, unravelling it by night, thus deferring her importunate suitors for over three years. This story has been told and retold by many others, such as Margaret Atwood in The Penelopiad (2005). But, as Renata Adler pointed out in her many layered novel Pitch Dark (1983), it seems highly unlikely. Penelope’s name may be connected with πήνη, a twisted thread or, in the plural, a web; perhaps she was just fooling Odysseus as to what really went on while he was away, twisting him round her little finger. 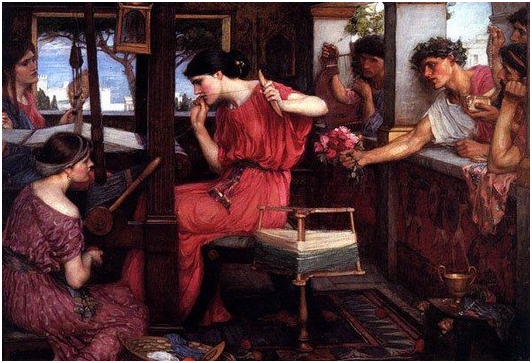