Although we don’t nowadays call bile gall, we still call the sac in which it is stored the gallbladder. “Bladder” is one of the early medical words listed in the Epinal glossary, in which “uessica” (classical Latin uesica, a bladder, blister, cyst, or vesicle) was glossed as “bledrae”.

The relevant Indo-European root was BEU, BHEL, or BHLEU, denoting swelling or flowering. “Bladder” was originally used to describe the urinary bladder, but it was later applied to other membranous sacs, such as gallbladders, swimming- or air-bladders in fish, air-bladders in plants and seaweeds, and even the chambers of the heart. Because an animal’s bladder could be filled with air, for example to use as a ball, “bladder” was used to describe anyone thought to be full of wind, a bletherer, like Burns’s Tam O’Shanter, “a blethering, blustering, drunken blellum”. A fool is also full of wind (Latin follis, a bag, sack, or bellows).

A bulla is a balloon-like blister. Bilberries and boulders are round and swollen, like a ball and the bollocks on bullocks and bulls. So are bulbs, like those on chibols and rocamboles. Pall-mall was a game played with a ball and a mallet (Latin malleus, like the hammer-shaped ossicle in the ear); Charles II played it in a London street that became known as Pall Mall. Bolsters and bellows are swollen bags. The belly bulges. A billow swells. Blossoms bloom.

Plants like Dianthus caryophyllus, whose flowers are scented like cloves, are commonly called gillyflowers, through homophonic folk etymology. The original Greek was κᾰρῠοφυλλον (literally a nut plant), the bud of the clove tree, Eugenia caryophyllata. In French that became girofle or, by metathesis, gilofre, which in English became in turn gillofer, gilloflower, and gillyflower. “Make your garden rich in gillyvors” says Polixenes in The Winter’s Tale. Phylloxera is a gall forming pest that infests grapes. Chlorophyll is the green stuff in leaves, except those that are achlorophyllous, and phylloquinone is another name for vitamin K1, found in green leafy vegetables.

The Roman goddess Flora is in the flower of her youth, as are her Greek equivalents, Phyllis and Phyllida, and perhaps they also make the φαλλός swell. Flowery prose is florid, excessively ornate, as if it were profusely adorned with flowers. Florida, the Sunshine State, was so called by Ponce de León in 1513 because of its lush vegetation and because he arrived there at Easter, in Spanish Pascua florida. Folium, a leaf, gives foliage and defoliate. A folio was a leaf of paper or many such bound into a book, originally one made up of sheets of paper folded once; a portfolio contains a collection of such leaves. Millefeuille is a delicious confection made from layers of leaf-like pastry, although perhaps not 1000 of them.

A fuller (Latin fullo) was a man whose job it was to full cloth, i.e. to tread, beat, or scour it so as to clean and thicken it. He would use fuller’s earth, sometimes used to treat self-poisoning, and Dipsacus fullonum, fuller’s teasel or thistle, whose leaves join round the stem, forming a cup shape (hence dipsacus, thirsty), and whose bracts curve backwards, giving it a rough head; the Clothworkers’ Company has a stylised teasel on its coat of arms (pictures). 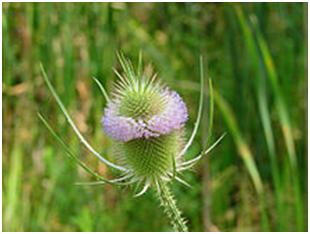 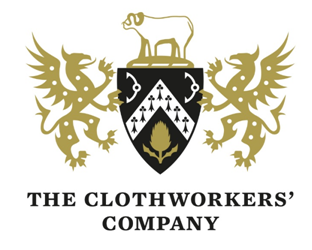 Isinglass is a gelatin like substance obtained from fish bladders, supposedly from an old Dutch word huisenblas, a sturgeon’s bladder. It is transparent, and so “-blas” becomes “-glass” by association. Some forms of mica resemble isinglass, and the isinglass curtains in the befringed surrey in Rogers and Hammerstein’s musical Oklahoma! were canvas curtains with peepholes made of thin sheets of mica. Isinglass accelerates the clarification of beer, and Guinness recently announced that they are going to remove it from their famous brew, by using a new filtration system at their brewery in St James’s Gate in Dublin. Doubtless they hope to promote sales to vegans and help to fill their bladders.