As I was saying, bile and gall, from the same linguistic roots, mean the same things. At least, “bile” means a secretion of the liver, anger, ill temper, and bitterness, and so does “gall”, although there are meanings of “gall” (impudence, for example) that do not belong to “bile”. The King James’ Bible, does not mention “bile”, but it does mention “gall”, 13 times, in three different meanings: the hepatic secretion, metaphorical bitterness, and in describing a poisonous bitter herb as “a root that beareth gall and wormwood”.

Wormwood supposedly sprang up in the trail of the serpent (or worm) as it left paradise, and Culpeper recommended it for worms, among many other things, as did Mrs Grieve. But “wormwood” comes from a mishearing or misspelling of “wermod”, listed in the Corpus Glossary of 725 as a gloss of the Latin word absinthium. Vermouth has absinth in it. Wormwood may have something to do with worms, for sure, but not specifically wood.

The many forms of the Indo-European root UER included ones that mean to twist or turn. Rotate a twig, Boy Scout fashion, and you ignite it, so UER came to mean the twig itself and by extension twig like objects, such as a rod (Greek ῥαβδος) or a club (Greek ῥόπαλον). In Latin virga was a twig or young shoot and virgo a virgin. Verbera were reverberating rods or whips. Ritual rods were made from verbenae, twigs of laurel, olive, myrtle, or cypress. A verger carried a rod as a sign of his office; so “verge” means the limits of one’s authority.

Introrse, extrorse, sinistrorse, and dextrorse truncatedly turn in, out, left, and right. The recto is a right hand page of a book, such as the title page; the verso is the page on the other side, with details about the publisher, date of publication, ISBN, and so on. Tinea versicolor is a multicoloured rash. Your trunk twists about its vertebrae. The twisting worm is vermis in Latin. Vermicelli are worm shaped pieces of pasta, and the vermiform appendix is worm like.

So what was the biblical root bearing gall and wormwood? It doesn’t have to be a specific plant, since the phrase was metaphorical, but what we call common wormwood is Artemisia absinthium. Other varieties have other names: A. gallica is French wormwood, A. pontica Roman wormwood, A. maritima sea wormwood, A. arborescens tree wormwood. Artemisia is named after the Greek goddess Artemis, perhaps because it was used for obstetric or gynaecological purposes, with which she was associated, having supposedly helped her mother deliver her twin brother Apollo immediately after she herself was born, or because she gave it to Chiron the centaur. The origin of Artemis’s name is not known. It may not even have been Greek. But one of several possibilities is that it came from the word for a butcher, ἄρτᾰμος; Artemis, being a huntress, would have butchered the animals she killed. A similar word meaning safe or sound, ἀρτεμής, may reflect her virginity.

This year’s Nobel Prize in Physiology or Medicine was awarded for two pharmacological discoveries, one of which was the rediscovery, by the Chinese pharmacologist Tu Youyou, of Artemisia annua, known in Chinese as qinghao, as a treatment for malaria. Qinghao was used to treat fevers by the 4th century physician Ge Hong (picture). He soaked the leaves of the plant in cold water and then twisted them, wringing out the sap. Heat would have destroyed the labile active ingredients, qinghaosu, cyclic endoperoxides, and the wringing out process is supposed to have created an emulsion in which they were stable. Coincidentally (or not?), the other awards this year were for treatments for worms. So we see the importance of twisting.

Images: Ge Hong (284-363) and an extract from “Emergency Prescriptions Kept up One’s Sleeve” in Chapter 3, Section 16, “Prescriptions for treating intermittent hot and cold conditions and all kinds of intermittent fevers”: “Another recipe: take one bunch of qinghao, add two sheng of water, soak it, wring it out, take all of the juice, and ingest it.” 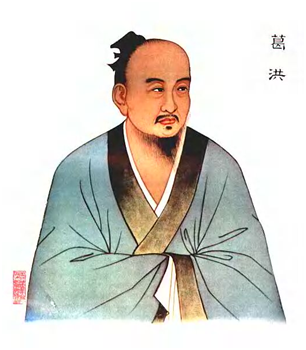 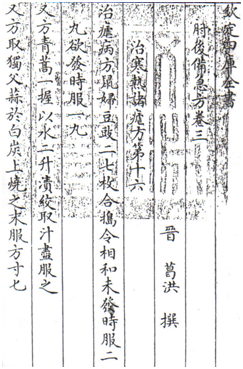