The Islampur sub-division of the Uttar Dinajpur district of West Bengal (a state in India) is the most underperforming area of the state in terms of health and other human development indicators. This sub-division has five blocks, and among these five blocks, Goalpokher-I is the least developed. Goalpokher-I lies between Bangladesh to the east and the Kisanganj district of Bihar to the west. Bihar is another one of the underprivileged states in India.

The block has gained some notoriety in public health spheres in the past due to frequent measles outbreaks and very low rates of routine immunization coverage. Indicators of reproductive and child health related activities are also poor. One of the reasons for this poor health service availability, amongst others, is that many health worker posts lie vacant and Auxillary Nurse Midwives (ANMs) are frequently transferred away from the area.

ANMs play a crucial role in bridging the gap between public health services and the community. The low literacy rate of the block , especially amongst women, in comparison to the rest of the district and other nearby districts of state of Bihar, forces the government to appoint ANMs from other blocks of the districts rather than locally. There are a total of 40 health sub-centers in Goalpokher-I.

As of 2009, a good number of ANMs started to work in Goalpokher-I and were transferred each year, leaving the sub-centers vacant for several months at a time. Even when ANMs from other districts join the post, it takes them more than six months to engage with the community effectively and they usually request to be transferred from Goalpokher by the end of this period. This leads to very poor service delivery of even basic health services e.g. routine immunization, ante natal care registration and services, and other services for general ailments. This also reduces the confidence of the community as many often return from the sub center without receiving any treatment due to a lack of midwives.

It is not only a problem with providing services. Records and reports are also not updated on a regular basis. Quality reporting is also lacking. During a 2010 survey on routine immunization in that block, the main reason for low registration and dropouts was a lack of awareness of the need for immunization. Even when patients got the first dose of the DPT vaccine many never returned for the second dose due to fever, pain, and a mild swelling of the injection site after the first jab. This can attributed to poor inter-personal communication and follow up from the health providers. Follow up visits by ANMs are irregular, the registers maintained by them are outdated, and they lack tracking systems for communicating with patients and follow up visits.

But from mid of 2009 to December 2012 the situation changed. ANMs were no longer transferred away from the area. The result was that there was an increase of routine immunization coverage and a reduction in the number of measles cases. The graphs below show the changing trend of various activities. (Source of the graph: https://nrhm-mis.nic.in/SitePages/Home.aspx) 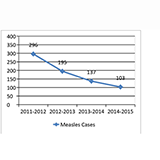 The continuous presence of ANMs for at least three years in this particular block in last few years is one of the major reasons of the increasing trend of routine immunization coverage and the decreasing trend of measles cases.

Between these years there was no significant change in the socio-economic status of the population, nor was any mass awareness programme carried out to improve the health indicators. The mere presence of the ANMs continuously at the sub centres built enough confidence in the community about the health services available at sub centers. Delivering health services better at the community level is clearly reflected in the health indicators.

The author is a student of elearning in Public Health Management(ePHM) course by Institute of Public Health, Bangalore.