The Hebrew name of the first man, Adam (אדם), was also used to mean “man” itself, although the more usual word is “ish” (איש). The origin of the name is unknown, but the punning author of Genesis juxtaposes the name Adam with the word for the dust of the earth, in Hebrew adamah (אדםה), from which Adam was made. The Latin equivalent is the idea that homo was made from humus. The Hebrew word for red, adom, reflecting the colour of the dust, may be connected, but there are other theories, such as connections with an Ethiopian word meaning “fair”, an Akkadian word meaning “maker”, and an Arabic word meaning “creature”. One cannot also ignore the fact that the Hebrew word for “blood” is dam (דם).

“Adam” has many metaphorical connections. Adam’s ale or wine is water, real wine having been discovered by Noah. Adam’s profession is husbandry—in Hebrew “ish oved adamah” (איש עבד אדםה) is a man who works the earth, as is George in Greek (γεωργός, a farmer, from γῆ ἔργειν, to work the earth). Adam’s flannel is the common mullein, Verbascum thapsus, of the Scrophulariaceae family, with its large soft woolly leaves, traditionally used to treat respiratory disorders, tumours, urinary tract infections, and skin diseases, and more recently touted as a possible treatment for tuberculosis and Trichomonas vaginalis infection. Some species of yucca, such as Yucca filamentosa and Yucca gloriosa, whose glycosides have in vitro antifungal activity, are called Adam’s needle or needle and thread.

Adam’s bridge, a limestone chain between India and Sri Lanka (picture), was, so the Ramayana tells us, built by Rama when his wife was abducted by the demon king of Ceylon, Ravana. Adam’s peak, a site of Buddhist pilgrimage, is a mountain in Sri Lanka (picture) where you can see the sri pada or sacred footprint, a rock formation near the summit; to whom the footprint is attributable depends on your religion—Buddhists suppose it to be that of Buddha and Hindus that of Shiva, while others suggest St Thomas or Adam, who supposedly fell there from paradise and expiated his original sin by standing on one foot for 1000 years. 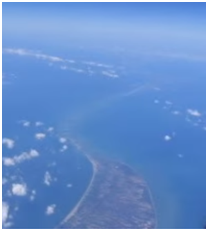 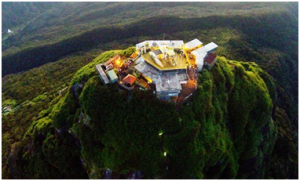 Adam’s rib is woman (in Hebrew ishah, אישה) from the account in Genesis that God put Adam to sleep (the first general anaesthetic) and fashioned Eve from one of his ribs. Adam’s curse is the need to work for a living. The old Adam, “th’offending Adam” in Shakespeare’s words, refers to our atavistic, particularly sinful, urges. And the Old English word throtbolla (throat-bowl), listed in the Epinal glossary, is now called the Adam’s apple.

Genesis describes the fruit of the tree of the knowledge of good and evil as p′ree (פרי), which simply means a fruit. The Vulgate, a late fourth century Latin translation of the Bible, compiled from various sources, translated “p′ree” as “malum”, which originally meant any tree fruit. The specific fruit depended on a qualifying word: malum citreum was a citron, malum cotoneum a quince, malum granatum a pomegranate, malum persicum a peach. Later “malum” was used to mean an apple. The fact that malum also meant trouble, pain, or hardship may have encouraged its choice for the name of the Edenic fruit. The modern Hebrew word for an apple is “tapuach” (תפוח), a word that also appears in the Bible, translated in the Authorized Version as “apple”, although it was more probably a quince.

When the term “Adam’s apple” entered English in the early 15th century it was used to describe not an apple, but a range of citrus fruits, such as Citrus maxima, the pomelo or shaddock, and Citrus limetta, a type of sweet lime. By the late 15th century it was being used to describe a banana or plantain, also called an apple of paradise. Then in the early 17th century it made its first appearance to describe the thyroid cartilage, which some also called “Adam’s morsel”. When Adam, it was said, swallowed the fruit, by then supposed to be an apple, the hand of God stopped it in his throat. This myth, not recounted in the Bible, was an attempt to explain the fact that the thyroid cartilage is prominent in men and not in women.

Incidentally, the plural of the Hebrew word p′ree, a fruit, is pērot, which, when written in Hebrew (פרות) looks as if it could be pronounced “fruit”. Just coincidence, surely?