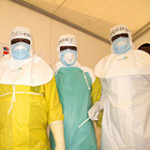 We are two of many British doctors and nurses chosen to receive a medal for providing medical care as part of the response to the Ebola crisis in West Africa that left thousands dead and already weak health systems in tatters. Recognising actions that are valuable to our society is important, but we shouldn’t lose sight of who contributed the most, or convince ourselves into thinking the job is done.

The real heroes, West African healthcare workers, will receive no medals. They remain in a region where more people are dying than ever before from preventable diseases as a direct result of the Ebola crisis and where things will only worsen unless there is serious investment. 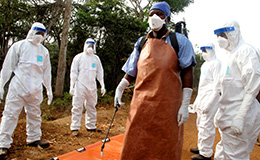 It would indeed be foolish to allow a collective patting of backs to serve as a full stop at the end of a broadly successful humanitarian response. Rather, it should serve as a comma, a catching of breath before ploughing on with the rest of the job.

Ebola was able to spread so fast and so far in West Africa because of weak healthcare systems. In every country that Ebola spread to with a functioning health infrastructure, cases were quickly identified and isolated, contacts were traced and monitored and outbreaks halted within weeks. The outbreak in West Africa is now in its 19th month and is not over, with a handful of cases still reported every week. 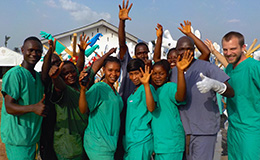 Prior to the Ebola outbreak, Sierra Leone had one of the weakest healthcare systems in the world. In my time working in Sierra Leone before the outbreak, I saw first-hand how too few staff with insufficient support and training tried to treat patients, battling inadequate diagnostic tools and frequent stock outs of essential medicines. These constraints led to one in five children not making their fifth birthday, and one in eight women dying at some point in their life due to childbirth.

Many healthcare staff bravely soldiered on during the outbreak, but with many of them recruited to work in the Ebola response, and few patients seeking care, death and suffering from other causes have inevitably increased even further. 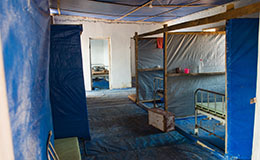 Mary * is one such healthcare worker. During the outbreak she worked in a poorly resourced holding centre, treating Ebola patients with basic protective equipment at substantial personal risk. Hundreds of healthcare workers contracted Ebola, the majority before the international response was able to build treatment centres with high standards of protection for staff.

Mary was understandably terrified of a disease never seen before in West Africa. No one had explained to her what Ebola was. She was rejected by her community: taxi drivers wouldn’t pick her up, people ignored her in the street and her neighbour moved away. She even sent her children to live with her family on the other side of the district because she was so terrified she would catch the disease.

It is important to recognise the contributions of people like Mary who have suffered such stigma, and we hope that in time their governments will do so. Arguably the most fitting recognition of the dedication and selflessness of all of those involved in the response would be for our government to show the same level of commitment over the coming years by providing much needed funding and technical support to rebuild their shattered healthcare systems.

Dilapidated healthcare systems were the reason an outbreak of this size was possible. If we lose sight of this as the media interest and drama fades, we will be leaving these countries more vulnerable to another outbreak. Anything less than a wholehearted, long-term international commitment to establishing sustainable, good quality healthcare available to all would be a disservice to the healthcare workers who risked, and gave, their lives during this devastating outbreak.

Andy and Sarah volunteered in Sierra Leone for the medical charity Doctors of the World (Médecins du Monde) UK.