Last week Andrew Brown, obituaries editor at UK newspaper The Daily Telegraph, gave a great talk to me and other colleagues at The BMJ about the Telegraph‘s approach to chronicling the lives of assorted establishment figures, rogues, villains, entertainers, and clergy.

The Telegraph’s obituaries are legendary, and Andrew described how the title had historically used certain codewords to communicate a deceased person’s homosexuality, alcoholism, or the fact that he or she was a crashing bore. He was invited by our own obituaries editor, Birte Twisselmann.

Thankfully, we now live in more enlightened times, and thankfully its obituary of neurologist Oliver Sacks included not only a direct reference to him being gay, but a lovely 1961 picture of him in motorbike leathers in Greenwich Village.

It’s great to learn that our own obituaries are also much appreciated (particularly Geoff Watts’s one about Sacks). 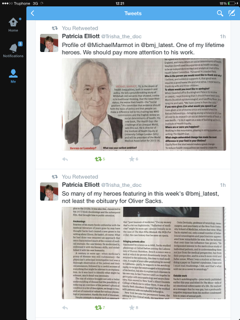 Here’s what weekend tweeter Patricia Elliott (@Trisha_the_doc) had to say. As you can see, she also liked our BMJ Confidential article about “evidence based optimist” Michael Marmot.

Patricia was not alone. Fellow tweeter Lauren Evans (@laurevans311) waded in to say she sometimes envied people their obituaries, and that they can make her feel inadequate! This certainly isn’t our intention! On Friday I spoke to a retired doctor, now living in a London nursing home, who was looking for the obituary we published of her sister, Monica Cronin (also a doctor), in 1990. It was great to be able to dig it out and send it on to her.

Another nice weekend tweet came from Marissa Borck (@KickAsana), who liked the blog post we published about the social media campaign #LookLikeASurgeon

Fellow tweeter Ed Fitzgerald (@DrEdFitzgerald) was similarly positive about our decision to include campaign images as our print issue “picture of the week.” 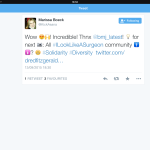 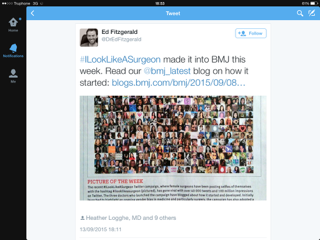 Twitter can also be a source of constructive criticism, and Prof Liz Lightstone (@kidneydoc101) tweeted the link to an open letter to the editor of The BMJ about our decision to “publish and fanfare a poorly based paper” on weekend deaths. The blog accuses of us of not “bigging up the NHS.” This debate is also being played out in rapid responses to the paper.