I am fortunate to possess content expertise on ethics and conflicts-of-interest (“COI”) in medicine and science, and I teach it in a variety of health professional settings. After reading the latest news story on a commercial industry’s partnership with academic scientists, I grew tired enough of seeing the same (to my mind) poor rationalizations for the permissibility of such an arrangement to create this handy COI bingo chart. 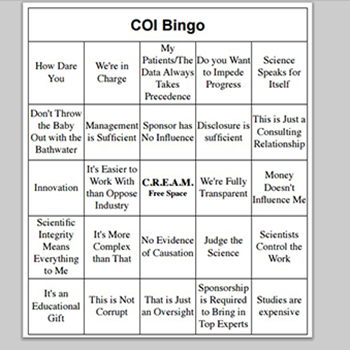 This chart is obviously crude and over-simplified, but as I explain in a post on my personal blog, what bothers me is not the legitimate disputes on the ethical permissibility of COIs in general. That is, reasonable people of good conscience can, to my mind, disagree on when and whether COIs pass ethical muster. What I find most frustrating is the extent to which leading physicians and scientists whose profession seems to require a commitment to some kind of evidence based practice are unaware of the best evidence on motivated bias. This literature is robust and well developed. And the comments that I often see and hear (which are also well-represented in the literature on COIs) indicate to me that the speakers are almost totally unaware of what the evidence on motivated bias actually demonstrates.

Among other well settled findings, the literature shows that relationships between commercial industry and physicians or scientists are extremely likely to influence physician/scientist behavior in a variety of ways. The claim that various barriers to such influence—i.e. individual virtue, institutional management, disclosure—are sufficient to prevent such influence is simply not an evidence based view. Human behavior changes depending on the relationships we maintain, and the extent of those changes tends to increase with the depth of the relationship (which explains why we tend to treat family members differently from perfect strangers). Financial exchanges are of course one indicator of the depth of a relationship, although they are not the only such marker.

If the physicians and scientists implicated in any particular COI were better aware of the literature on motivated bias, I find it difficult to believe that they would continue to rely on the same types of rationalizations for deep financial entanglements with commercial industry. It is not credible to claim that a clinician’s virtue is adequate to protect against influence on prescribing practices. It is not credible to claim that a scientist’s disclosure of relationships with commercial industry is adequate to prevent manipulation of the knowledge produced from a study. The evidence on motivated bias belies these defenses and many other standard claims reflected in the COI bingo chart.

Where physicians and scientists choose to enter into relationships with commercial entities, they should do so with the same commitment to evidence based practice that they honor in their clinical and scientific work. That commitment requires an admission that the relationship is in fact very likely to affect their clinical practice and/or the scientific study or inquiry being performed. As noted above, such an admission does not necessarily imply ethical impropriety. One might argue for a variety of reasons that even given the well documented finding that relationships with commercial industry are extremely likely to change the physician/scientist’s behavior, such relationships are nonetheless morally justified. But the factual premise of such claims ought to be grounded in what the best evidence on motivated bias actually shows. The COI bingo chart I made is intended as satire of attempts to justify such relationships ethically that remain, in my view, uninformed on the empirical basis for many of the ethical criticisms of such relationships.

Ultimately, if we are going to disagree on the ethical propriety of COIs in medicine and science, at a minimum we ought to agree to inform ourselves on what the best evidence shows regarding the impact of such relationships.

Daniel S Goldberg is an attorney, an historian of medicine, and a bioethicist. He is an assistant professor in the Department of Bioethics & Interdisciplinary Studies in the Brody School of Medicine, East Carolina University, USA.