In 1545 Girolamo Cardano, an Italian physician, mathematician, and philosopher, published a book, Ars magna, or the Rules of Algebra (picture), which included the solutions to cubic and quartic equations, for which Cardano is perhaps best known today. Rearranging the letters of “ars magna” yields “anagrams”, another 16th century phenomenon, in English at least—the first recorded reference to the word given in the Oxford English Dictionary is from 1589. 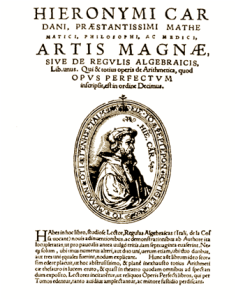 Some have attributed the earliest instances of anagrams to the 3rd century BC Greek poet Lycophron, who flattered wealthy patrons by anagrammatizing their names. In his hands, Πτολεμαῖος (Ptolemaios; Ptolemy II) and his queen Ἀρσῐνόη (Arsinoë) became ἀπό μέλιτος (apo melitos; honeyed) and Ἡρας ἴον ([H]ēras ion; Hera’s violet).

But anagrams have a longer pedigree still, being found, for example, in ancient Hebrew and Arabic texts. The Old Testament is peppered with them. Isaiah for instance (lxi.3) says “to give them a garland instead of ashes”, or in Hebrew לתת להם פאר תחת אפר, where the anagrammatized words are underlined. And, cabbalistically explained, passages from the Mishnah (משנה) are recited to honour the soul (neshamah; נשמה) of a dead relative.

Anagrams are also found in biological nomenclature. The genus of kingfishers is called Alcedo, and when Linnaeus needed names for related genera, such as kookaburras, he chose Lacedo and Dacelo. Eleotris and Erotelis are genera of sleeper gobies and Ptinus, Niptus, and Tipnus genera of beetles. The 19th century naturalist William Elford Leach played on the name Caroline, Carolina in Latin, in naming genera of crustacea, including Conilera, Lironeca, Nerocila, Olencira, Rocinela, and Cirolana. He might have added Lonicera, had that name not already been used for the genus of honeysuckles, after the 16th century German botanist Adam Lonitzer (Lonicerus).

Chemicals too can be anagrammatic, like the nearly anagrammatic cousins pantothenic and hopantenic acids. Looking for beta-adrenoceptor antagonists (beta-blockers), based on the agonist isoprenaline and the partial agonist dichloroisoprenaline, James Black and his colleagues, working at Imperial Chemical Industries (ICI) Ltd, discovered 2-isopropylamino-1-[2-naphthyl]ethanol hydrochloride or ICI 38,174, “conceived,” as Black put it, “in excitement”. They called it nethaline or pronethalol. ICI’s laboratories were situated in Alderley Edge, near Manchester, and so they gave it the brand name Alderlin. Carcinogenic in mice, it was not used clinically, but it was succeeded by drugs such as propranolol, which was given the near anagrammatic brand name of Inderal, and practolol or Eraldin.

The opposite of a cognate anagram, one that in some way contradicts the meaning of the original, has been called an antigram. A funeral is not real fun and forty-five is definitely not over fifty. An antagonist is not against? Wrong. And saintliness entails sins? Wrong again!

Some anagrams are ambiguous. Is the Telegraph a great help? Is one hug ever enough? Are recipes always precise? Was Margaret Thatcher that great charmer? Is a dormitory a dirty room? Maybe, but one hopes not. And is it true that the innominate artery has no name in it?

Some might describe a medical consultation as a noted miscalculation, in which I’d menace patient with a patent medicine. Tell me, are those cognate anagrams or antigrams?