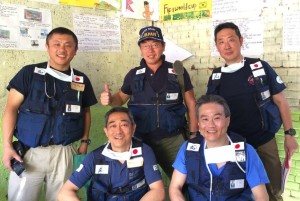 The massive 7.8 magnitude earthquake that occurred 77 km northwest of Kathmandu, the capital of Nepal, on 25 April 2015 left more than 8000 people dead and 16 000 injured. The district of Sindhupalchok, where more than 3000 people were lost, was struck particularly hard.

At the request of the Japanese government, disaster relief medical teams from the Japan International Cooperation Agency (JICA) were sent to Nepal on 28 April. The primary medical team consisted of 48 people, including eight doctors: two trauma surgeons, two orthopaedists, two emergency physicians, one paediatrician and one anaesthesiologist. We arrived in Kathmandu on 29 April via Bangkok. Less than one percent of the buildings in the city were damaged and the infrastructure was preserved, so for many inhabitants life went on as usual for the most part. People living in tents in parks were gradually returning to their homes. However, there were frequent aftershocks.

A foreign medical team (FMT) meeting was held at the onsite operations coordination centre (OSOCC) in Kathmandu by the Nepalese Ministry of Health and Population and the World Health Organization. The strategy adopted was to set up type 2 FMTs in the main affected areas as hub hospitals, with type 1 mobile teams as satellites around them. The JICA team was a type 2 FMT, and was asked to serve as the hub hospital in Barhabise in the district of Sindhupalchok, where some of the greatest damage had occurred.

Barhabise is located in a mountainous area about 80 km northeast of Kathmandu. Since the region had been heavily damaged, local medical resources were destroyed. All of the doctors from the only hospital in the region had evacuated to Kathmandu, and no surgeries or inpatient treatments could be performed. Moreover, many victims were scattered throughout the region and—unable to travel to a place where they could receive medical treatment—remained in the affected area without receiving any medical attention.

On 30 April, some of our team members were transported to Barhabise by a Nepalese military helicopter, bringing a small amount of medical supplies with them.

Barhabise is a long and narrow town situated along a river with almost no open, flat land. The only available space to set up our medical tent was on the grounds of a private English school along a cliff, and we began examining and treating victims on 1 May. It was six days after the earthquake, but we saw trauma patients who had not yet received any treatment at all—many of whom were brought in by their families from remote areas, as well as patients referred by type 1 mobile teams from Poland and elsewhere who had been transported by ambulance. However, since we did not have the resources to perform surgery, all we could do for the referred patients was to confirm the diagnosis with X-ray or ultrasound, provide stabilisation treatment, and then refer them on to a hospital in Kathmandu, which was over a four hour drive away.

Six tonnes of medical supplies to start the field hospital had been sent from Japan, but these were still in Bangkok. This was because support aircrafts exceeded the parking capacity of the Kathmandu Airport and aircraft landing restrictions were in place. It was 4 May before the medical supplies for our large medical tents and surgeries arrived in Kathmandu. They were then sent on to Barhabise by road in small trucks on the same day.

Our field hospital for both surgery and patient beds was finally started on 5 May, 10 days after the earthquake. In previous disasters, dispatched JICA teams had type 1 field clinic functions only; this was the first time that a Japanese team had run a type 2 operation. While there we performed seven major surgeries, however, none of the injured people required leg amputation or presented crush syndrome.

Medical support for Nepal will still be needed for a long time, and we are concerned about the spread of infectious diseases among the homeless and poor when the rainy season starts.

In closing, we would like to express our gratitude to Dr Basant Pant, chairman of the Annapurna Neurological Institute and Allied Sciences in Nepal, for the support he provided to our team.