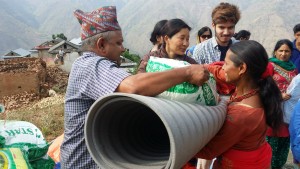 Nepal’s earthquake affected 30 of its 75 districts taking the lives of nearly 8,604 people. 16,808 people were injured. About 3 million were displaced during two major earthquakes less than two week apart and hundreds of aftershocks. The United Nations High Commissioner for Refugees (UNHCR) says that it destroyed 285 000 houses. Immediately after the earthquake, people started to mobilize in a search and relief operation. The immediate response involved taking dead bodies out of the collapsed buildings, carrying injured people to the hospital, and helping to set up shelters for survivors. The involvement of non governmental organizations (NGOs) was praiseworthy in terms of maintaining food supplies, tarpaulins, and medicines following the earthquakes. However what hasn’t been discussed as much is how NGOs operated during the earthquake, which provides an interesting lesson for larger audiences around the globe.

The social welfare council of Nepal is the apex point for NGOs, and the district authorizes them for activities in specific sectors like health, education, and agriculture. Reports say there are nearly 30 000 NGOs in Nepal, of which only a minority of them are still functional.  The majority of NGOs offices collapsed in the earthquake and haven’t recovered. NGOs are the key to the government’s community based approach to poverty alleviation, nutrition, and child and maternal health. Criticized heavily for unaccountability and a lack of transparency, not all Nepalese NGOs are the same. However their partnership with the government in the past three decades has brought significant achievement in health, education, and agriculture.

Many Nepalese NGOs have never had any experience of providing an emergency response. This is the case for the Nepal Development Society (NEDS), who we work with. However in the aftermath of the earthquake, many of these NGOs had to get involved in emergency relief work and reconstruction activities in hard hit districts. The NGOs did not have expertise or resources, and mostly responded to humanitarian needs on the ground. After the earthquake, people like us showed a strong will to support the affected people. However, the biggest dilemma was how to do this. The continuous aftershocks even made it difficult to be together and discuss this in detail. As we were not prepared for such emergency responses before, our lack of experience hindered our strong will. However this chaos did not last a long time.

Our first trip was to the Hansapur Village Development Committee (VDC) of the Gorkha District (Close to the epicenter). During the relief phase, our small organization distributed more than 1500 tarpaulins, 500 blankets, and over 30 000 kg of rice. The organization has reached over 20 VDCs with relief materials and showed solidarity with the most affected people. Currently, the organization is building temporary classrooms for 20 schools located in Hansapur and Manbu VDCs of Gorkha.

We faced many challenges. The first challenge was to deal with our own emotions. It was challenging in the sense that carrying out activities in villages where every day you come across corpses taken out from fallen houses makes you weak. Meeting helpless people with buried belongings, people with fractures and bandages, people with amputated hands and legs was very upsetting. However, we kept ourselves strong and continued our relief work. The saddest movement was when someone asked for a single tarpaulin and we could not provide them with it.

The second challenge was securing financial resources. When we started our relief work, no international or national agency was taking care of victims in villages where landslides in several places disconnected them and made them virtually isolated. As a small local NGO we did not have enough resources to buy the relief materials and many funding organizations often asked for a detailed plan and lengthy explanation for getting support.

The third challenge was buying and collecting the necessary goods. Though relief materials were started to pile up at the airport and at the local district development committee, there was no clear distributing plan in the early days. Immediately after the earthquake, there was a shortage of relief materials such as tarpaulins and mattress. Most of the sellers did not want to provide receipts for purchases made because they did not want to pay VAT to the government. In some cases we were forced to buy over priced goods without receipts. The response from the business sector was not just inadequate, but also worrisome as the market prices of essential goods—tents and even the rent of vehicles started to soar up in little controlled markets after the earthquake. So the important lesson from here is that government should monitor the market prices regularly after an emergency, and profit mergers should be de-incentivized.

We also struggled to arrange transportation to the hard hit areas. As a small NGO we did not have capacity to transport relief aid via helicopter. We also came to know that helicopters only carry small numbers of relief materials. So, we distributed relief materials via road or by walking. Even in the villages where they had roads, occasional landslides, and mud and pit holes made travelling impossible. In Gorkha there were big stones lying on the road and it was impossible to travel on such roads without risking lives. The road conditions became worse in the week following when the pre-monsoon rains caused more landslides making travel to these villages even more challenging.  In some instances, the affected community people walked more than six hours to receive our relief materials.

We found many international medical teams were travelling to the earthquake-affected areas even many weeks after earthquake. That was a waste of resources. Medical teams are most needed in the early days of earthquake. Many medical teams had good doctors but without the equipment and supplies that they would need in such settings. Our lesson learned is that improving transportation to carry injured patients and improving the conditions of hospitals is more effective.  There was a lack of ambulances in the rural areas. In many cases, we gave a lift to the many injured patients and took them to the hospitals.

In the beginning, we thought securing financial resources would be the biggest challenge for us. However, we continuously received the support from our well-wishers around the globe. For several days after the earthquake in remote parts of Nepal, we did not see the presence of big organizations in many remote parts. We are aware that big organization have to fulfil many formalities and this delayed the rapid response. Our experience tells that mobilizing local NGOs in Nepal is more effective in early days of earthquake. We continuously worked with our local volunteers and school teachers. Due to the absence of local governing bodies, we found mobilizing teachers is very effective because they have a better understanding of the villages and the local context.

Shiva Raj Mishra is an Australia Awards Scholar in University of Western Australia and member of Nepal Development Society. He is extensively involved on the fund raising for relief and reconstruction activities of NEDS.

Dinesh Neupane is a founding Chair of Nepal Development Society and PhD Fellow at Center for Global Health, Aarhus University, Denmark. He is currently coordinating relief and reconstruction activities of NEDS.

Competing interests: Both authors are attached to the Nepal Development Society.