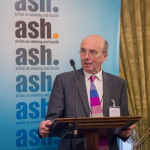 Smoking still kills. Today it will kill 200 people. [1] People will die from heart attacks, from cancers, from respiratory illnesses, and many other conditions. But smoking doesn’t just kill. For every person that dies today 20 more will live with their illnesses needing the care and support of the NHS, social care services, and their friends and families. [2]

This places a terrible burden on individuals, families, and communities and yet further strain on our already creaking NHS. As NHS England stated in the Five Year Forward View: “the future health of millions of children, the sustainability of the NHS, and the economic prosperity of Britain all now depend on a radical upgrade in prevention and public health” (their emphasis). [3] Reducing smoking is the value proposition for the NHS. It is cheap, effective and it saves lives and money at a rate few other healthcare activities can match. Yet the chancellor has just ordered a £200 million cut to local authority public health budgets.

It is this reality which underpins ASH’s new report published today, Smoking Still Kills. [4] The report, endorsed by more than 120 organisations, is a blueprint for what is needed next to reduce smoking. It calls for a new comprehensive strategy and detailed recommendations for what this should include. However, this would all be for nought if the report didn’t also make clear how this could be funded.

Tobacco companies made £1 billion in profit in the UK last year. [5] Although sales are in decline the companies continue to be highly profitable. It is right that these companies, whose products costs the NHS alone at least £2 billion a year, should pay to address the harm they cause. [6]

Our report proposes that the government should compel tobacco companies to foot the bill for an evidence based programme to reduce smoking.

Such a policy would be a win-win. It would provide much needed income for public health programmes. In turn falling smoking rates will reduce the demand for the NHS, providing a sustainable way to start addressing the future NHS funding gap.

With this resource we think England could be truly ambitious. We should set a target to reduce smoking rates to less than 5% for all groups by 2035.

We have come so far in recent years and it is right that we should aim even higher. When I was a medical student in the 1970s the lung cancer five year survival rate was 7%. Today, this rate is much the same. Not much progress for a terrible disease that we know how to prevent.

Since 1998, when the first comprehensive government strategy on smoking was published, 70,000 fewer people have died. [7] This is not because medical science made triumphant advances but because we did something that sounds simple—we got people to quit smoking.

Today smoking still kills. If we want this to change we must redouble our efforts and make sure the architects of this epidemic pay the bill.

John Moxham is chair of ASH and professor of respiratory medicine at King’s College London.

Competing interests: John Moxham is the chair of the Board of Trustees for Action on Smoking and Health. He has no competing financial interests.

2. How Tobacco Smoke Causes Disease: The Biology and Behavioral Basis for Smoking-Attributable Disease: A Report of the Surgeon General US Department of Health and Human Services, 2010.

4. The recommendations in Smoking Still Kills were developed by an editorial board of experts working in consultation with local and national stakeholders. The board includes Cancer Research UK, the British Heart Foundation, and senior academics from the University of Nottingham, King’s College London and University College London (UCL). The report has also been endorsed by over 120 public health-related organisations. The report was jointly funded by Cancer Research UK, British Heart Foundation and ASH. The report will be available from 10th June at: www.ash.org.uk/smokingstillkills

5. Branston JR, Gilmore AB. The extreme profitability of the UK tobacco market and the rationale for a new tobacco levy. University of Bath. 2015.