In each of the following pairs of generic drug names one is the International Nonproprietary Name (INN) and the other is not:

Before you read on, decide which you think is the INN in each case.

You may be surprised to see from the entries in the World Health Organization’s website (figure, below, click to enlarge) that in all these cases bar one the INN is the version with the t and not the th in the name.

Extracts from the WHO’s lists of INNs 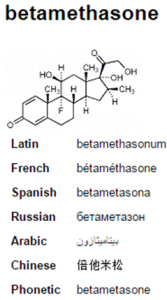 The exception is betamethasone, and even that is problematic (figure, right). The explanation is in Principle 7 in the WHO’s “naming principles for designation of INNs:”

To facilitate the translation and pronunciation of INN, “f” should be used instead of “ph,” “t” instead of “th,” “e” instead of “ae” or “oe,” and “i” instead of “y”; the use of the letters “h” and “k” should be avoided. When devising an INN it is important to be aware of possible language problems. Since the name is used worldwide, not only should certain letters be avoided, but experts need to be aware of unsuitable connotations in the major languages spoken in the world.

But Principle 7 is not uniformly applied. The t/th examples show this, as do amfetamine/amphotericin, netilmicin/erythromycin, hypromellose and talimogene laherparepvec (yes really), and ketamine and ustekinumab. Furthermore, since English is the scientific lingua franca, the commonly used forms are often not the INNs. I looked for the drug names above in the titles of papers indexed in Pubmed; most authors use th (table, click to enlarge).

If you make the sound of the hissing phoneme ssss, a voiceless alveolar fricative, and then move the tip of your tongue to touch your upper teeth the sound will become th, as in “think,” a voiceless interdental fricative. If you phonate at the same time it will be th as in “this,” a voiced interdental fricative. In Old English and Icelandic these two phonemes were called thorn (voiceless th) and eth (voiced th). The corresponding runes were þ and ð. In Late Old English manuscripts these two symbols (graphemes) were used more or less interchangeably, the voicing being dictated by the surrounding sounds. However, when the Danish philologist Otto Jespersen created a phonetic transcription scheme, he allotted þ and ð specifically to the two different th sounds, voiced (ð) and unvoiced (þ). Later on, ð was adopted in the International Phonetic Alphabet, but þ was replaced by θ, the Greek theta.

The thorn grapheme is typographically problematic. It was sometimes represented by overtyping b and p and sometimes by a slash followed by a lower case o. And in old English manuscripts it was often represented as y, because of the similarity of the two letters. So “the,” “this,” and “that” became “ye,” “yis,” and “yat” or “yt.” If you want your establishment to appear to be old standing you can call it, say, Ye Olde Tea Shoppe, jocularly pronounced “oldie shoppie,” or perhaps Ye Olde Pizza Pub.

Ye Olde Periodic Table contains four elements, the solid earth (Ea), the transitional water (Wa), and the non-solid Air (Ai), and Fire (Fi). Aristotle would have been impressed, even if Mendeleyev might have demurred.