• “We were on the fifth floor of the Yellow Pagoda Hotel discussing radiotherapy for lung cancer at about noon on Saturday 25 April when suddenly the floor lurched and we were thrown to the ground with chairs falling. A second later the electricity failed. For what seemed an age, but seemingly was only 40 seconds, the walls and floor moved terrifyingly as we lay on the floor.” Read more from the cancer specialist Jane Barrett, who experienced the Nepalese earthquake firsthand. See all the latest in News and more in blogs.

• Television and film depictions of mental ill health affect public attitudes, which is why the UK charities Mind and Rethink launched the Time to Change campaign in 2007, explains Rowena Carter in a Medicine and the Media feature. The charity challenges inappropriate portrayals and pairs scriptwriters with patients to foster accuracy during stories’ development, for example, when EastEnders’ Ian Beale experienced depression, Carter writes. 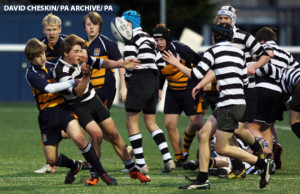 • “I detested rugby when forced to play it as a child at school and took pride in running away from the ball so as to avoid the risk of injury,” wrote David W Berger in a rapid response on thebmj.com on 3 May to a recent analysis article on injury in the school sport.

The district medical officer in emergency medicine at Broome Hospital in Western Australia asks, “What’s the point of this risk of serious injury when you can play touch rugby or one of a number of other, much safer, non-contact, competitive team ball games? Isn’t this view of violence and risk of injury as being somehow ennobling and character building outdated? It’s 2015, people, not 1915.”

• Finally, our fearless GP columnist, Margaret McCartney, takes aim this week at the most egregious terminology in healthcare that she thinks “inadvertently or otherwise misleads.” Examples she gives include “avoidable admission.” McCartney clarifies that this is a “hospital admission which, in retrospect and with adequate social and primary care funding, could have been managed in the community.” Please do share your experiences of lazy language or deliberate doublespeak.

Let us know what you think about these issues or any others by sending a rapid response to any article on thebmj.com. We republish the most interesting and useful as formal letters to the editor.

Richard Hurley is features and debates editor, The BMJ. You can follow him on Twitter @rich_hurley. Email rhurley@bmj.com