As the two year anniversary of the collapse of the Rana Plaza approaches—when over 1100 people were killed and 2500 injured, mostly women garment workers—the fight for compensation continues. The eight storey building outside Dhaka, which housed several clothing factories supplying major global brands, collapsed on 24 April 2013 in one of the world’s worst industrial disasters.

Last week the Italian Benetton Group announced a US$1.1 million contribution to the Rana Plaza compensation fund—but this has been met with disappointment by the two global unions representing victims who say it is too little too late, and has highlighted the dozen or so other European and North American companies still in arrears for their payments.

As The Independent reported this week, the fund is backed by the UN’s International Labour Organization and is intended to provide compensation for medical expenses and lost earnings for victims and their families. It “should be about $30m, but less than $23m has been donated to date, which means that at least 5,000 people eligible for compensation will end up with only 70 per cent of what they are expecting.”

For many survivors the fight is not just for compensation, but for any measure of livelihood in the disaster’s aftermath. As I learnt this week in Dhaka, while the memories of the building tragedy may be fading, the needs of the survivors persist.

Local organisations are stepping up, chief among them is the non-governmental organisation Brac that helped with the emergency response to Rana Plaza and is now assisting, in collaboration with government and others like the Centre for the Rehabilitation of the Paralysed, with the considerable long term needs of those who survived the disaster.

Many people rescued from the rubble of Rana Plaza required amputations, some of them at the building site itself, when rescue workers with no training or anaesthesia had to remove limbs to pull survivors out. Following their immediate recuperation, many survivors were treated at the Brac Limb and Brace Centre in Dhaka, which focuses its efforts on empowering people with disabilities by providing quality braces and prosthetics. They have now fitted a total of 54 upper and lower limbs and braces for 46 of the Rana Plaza survivors who lost arms or legs, or both, through amputation or sustained spinal cord injuries. While victims of car or motorcycle crashes make up the bulk of the approximately 1900 patients this Brac centre sees each year, industrial “accidents” like Rana Plaza are a growing share of the case load. 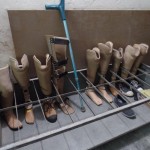 During a visit to the clinic this week, the process of casting, creating a trial limb, heating and moulding the materials, and building and refining artificial limbs was demonstrated. Materials are sourced externally—primarily from the International Committee of the Red Cross, which has pioneered use of polypropylene for prosthetics in the developing world—but the limbs and braces themselves are produced in-house. That the entire process of manufacturing and fitting life-enhancing limbs, usually completed within two weeks, is done in a dusty space of about 70 square metres is extraordinary. Many of the Bangladeshi technicians—there are 20 staff in total—were sent for their training in India, and some are amputees themselves.

Brac’s revolution is in their use of low cost, high impact health technologies, and the case of prosthetics is no exception. According to MD Shahinul Hoque Ripon, senior programme manager, the limbs are “hard, waterproof, easy to handle, easy to modify or repair, and cheap.” And most importantly, they are acceptable to patients, many of whom live in villages or slums and require equipment that is rugged and low-maintenance. Patients stay at the centre for a week of training with their new limbs until they are comfortable leaving.

Ripon explains that the upper limb prosthetics are the most difficult—even in surgery, amputations after Rana Plaza were often not performed well, leaving insufficient space on the shoulder to attach and fit the artificial limb. And often when patients first presented, their stems were infected or soiled and poorly taken care of, and patients had little muscle power. Monthly follow-up for all patients is therefore essential—to ensure the limbs or braces are performing, to encourage physical therapy and regular usage of the prosthetic, and for health and wellness checks by GPs and an orthopaedic surgeon.

Transport, housing, and food costs are also provided while receiving medical treatment, as well as counselling. For those patients requiring more specialised care for neurological injuries, severe mental health conditions, or vision problems, referrals are provided to other clinical settings in the public or private sector.

The costs of the polypropylene limbs run to about 35 000 taka (£300) for patients requiring a lower limb prosthetic; two other types of limbs are available including a lightweight, UK-produced version for 80 000 taka. The payment plan allows Brac to recover costs for their operations. Those unable to pay have their fees waived.

Of course, it’s not just physical health problems that resulted from the Rana Plaza disaster, but emotional trauma as well. All patients need and receive ongoing psychosocial support. The impact on survivors’ lives is vast. Some women survived the Rana Plaza disaster only to be rejected or abandoned by their families and children because of their injuries, said Ripon. Physical disabilities are seen as “deformities” in much of this culture and make young women unmarriable. In most cases the woman garment worker was the sole source of income for a family—without a job or the ability to work she may no longer be seen as useful and perceive herself as a burden to their families and society. A year after the tragedy many survivors were reported as saying: “What will I do with this life now? It would have been better if I just died that day.”

Financial needs were immediate, but they have persisted so Brac in collaboration with others has provided “livelihood training.” 350 survivors have received it so far, says Ripon. With funds received in a partnership with Benetton, Brac gave a fixed stipend to survivors, as well as skills training and apprenticeship opportunities. It has also provided grants to seed small businesses such as shops or to lease land for farming. Of all the patients from Rana Plaza, Ripon says, “we have seen none who have wanted to go back to the garment industry. They are too scared.”

Brac’s partnerships have generated powerful videos of Rana Plaza survivors and how they are adjusting to their new prosthetic limbs, recovering from the tragedy, and making plans for the future. But rehabilitation and recovery are painfully slow. Brac, with the Centre for Rehabilitation of the Paralysed, Government of Bangladesh, International Labour Organisation, and others are soon to announce an additional partnership to provide longer term support and assistance for Rana Plaza survivors.

Jocalyn Clark (@jocalynclark) is executive editor of the Journal of Health, Population and Nutrition, and other external publications at icddr,b (a global health research organisation in Dhaka, Bangladesh). She was a senior editor at PLOS Medicine and assistant editor at The BMJ.