A case of Vernet’s syndrome, unilateral paralysis of the 9th, 10th, and 11th cranial nerves, caused me to read up about the jugular foramen and tumours therein.

The jugular foramen, a triangular structure at the base of the brain near the mastoid process, nearly long enough to be regarded as a canal, contains numerous important structures, including the internal jugular vein, the inferior petrosal sinus, and the posterior meningeal artery, the glossopharyngeal, vagus, and spinal accessory nerves, Arnold’s nerve, and Jacobsen’s nerve.

It is not therefore surprising that tumours in the region can be highly troublesome, and surgical management difficult and hazardous. Depending on the position and extent of the tumour, different approaches can be taken: retrosigmoid, infratemporal, and zygomatic-transmandibular. The last of these is needed for extensive lesions. 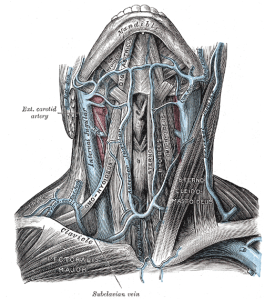 The veins of the neck, as depicted in Henry Gray’s Anatomy Descriptive and Applied (Figure 558 in the 20th edition of 1918, edited by Robert Howden, the first to include a photograph and obituary of Gray).

Most tumours in the area involve the glomic tissue of the jugular vein, and taking a zygomatic approach to reach the jugular foramen makes etymological as well as surgical sense.

From the Indo-European root IEUG, to join or unite, to shake together or mix, came Sanskrit, Greek, and Latin words, in turn enriching our own language.

Sanskrit Yoga is the discipline that attempts to break the cycle of death and reincarnation by uniting the emancipated soul of its practitioner, the yogi or yogin, with the supreme being. The famous New York Yankees catcher Lawrence Peter Berra was nicknamed Yogi because of the way he crossed his arms and legs. Yogi Bear was named after him. Berra’s aphoristic pronouncements (”If you come to a fork in the road, take it;” “Nobody goes there any more—it’s too crowded;” “I never said most of the things I said”) are known as yogiisms.

Greek Ζῠγόν (zugon) or ζεῦγος (zeugos) was a yoke or pair of things. A zygote is the conjunction of a sperm and an ovum, the cell from which we all develop. Being heterozygous or homozygous means having one or both of the alleles of a gene. Zeugma is a figure of speech in which a single verb governs a number of clauses, joining them contextually.

Latin Iugum was a yoke or yoke like structure. Iugulum was the collar bone, joining the sternum and the humeral end of the scapula, and by extension the part of the neck above it, where the jugular veins run; Aristotle and Galen called them φλέβες σφαγίτιδες, the sacrificial veins, and the term is still used in Greek. The eyes are conjugate—they move in the same direction; in abnormalities such as conjugate deviation and conjugate gaze palsies, they move together but not in certain directions. Many of the words I mention here are conjugate—they come from the same root.

The word yoke itself comes from IEUG, as perhaps also does yokel, the one who does the yoking, although that connection cannot be traced.

There is a phonemic connection too. The Latin word iugum was the name of a letter that was known in Middle English and Older Scots as yogh. Its symbol was ʒ or sometimes ȝ. The similar letter z was sometimes used to represent a yogh, especially when a printer ran out of characters. The names Menzies and McKenzie were originally spelt with a yogh, not a z. Because of the yogh, Menzies is pronounced “Mingis” in Scotland, and Menzies Campbell is known as “Ming.” It also persists in the Scots name Dalziel (Dee-ell) and in words such as capercailzie (kay-per-´kay-lee), a wood-grouse, and gaberlunzie (gab-ur-´loony), a beggar.

In the International Phonetic Alphabet the symbol ʒ, also known as “ezh,” is used to represent the zh sound. Just as voicing the hissing phoneme s gives z, so voicing the phoneme sh gives zh, the voiced postalveolar fricative, seen in “measurement precision.”

When a committee detailed with scrutinising our teaching skills visited us some years ago, the chairman of the group haughtily told us at the end of the visit that while his committee still had much work to do that evening, we were free to go. Since this was Oxford, he said, he expected that we would go home and conjugate some Latin nouns. Of course, we enlightened Oxonians knew perfectly well that nouns are declined; it is verbs that are conjugated. “I think,” a colleague murmured, “I shall go home and conjugate my wife!” I hope she didn’t decline.