• In the week of the formal launch of the UK general election campaign, with NHS policies set to take centre stage, The BMJ publishes an analysis article looking at politicians’ pledges on access to primary care. Thomas E Cowling and colleagues go behind the rhetoric and look at the evidence on getting a GP appointment. 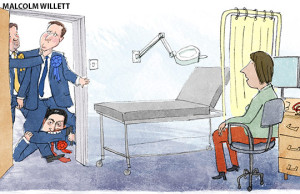 But Cowling and colleagues say that the pledges are unlikely to be achieved within a parliamentary term, that the public should question the pledges, that the likely effects of proposed changes in access to general practice are unclear, and that any policies should be independently evaluated in pilot studies before wide implementation.

•Meanwhile, emergency medicine trainee Sophie Hardy asks in an editorial why it is so difficult to learn from major incidents in England. “Reporting the results of every intervention is becoming the norm in medicine and provides an excellent basis for medical advancement and quality control,” she writes. “But major incidents have so far escaped this scrutiny . . . Our understanding of major incidents and how best to respond to them is therefore limited.”

At the root of this problem is lack of data, she says, describing an incident from her own experience. “I was on duty in the emergency department at the main receiving hospital for a major incident in Kent after a 200 car pile-up. When I tried to write up the incident, I found it difficult to obtain the information I needed. A review of the literature indicated that others have encountered similar problems and as a result, little formal documentation exists for the majority of major incidents that have occurred in England or, indeed, worldwide. For example, most of the 108 major incidents occurring in Britain during 1968-96 were unreported in the medical literature.”

Political sensitivity comes into Hardy’s analysis: “Various government and private organisations are responsible for preparing for major incidents, and if the response is deemed inadequate, they may worry about being blamed. There is a reluctance to share information because it could threaten votes, funding, and employment.”

Hardy concludes that we can “analyse, compare, and learn from previous incidents” by “improving data collection, having better access to these data, introducing a standardised reporting structure, and establishing an open access, centralised database for recording and reporting each major incident that occurs.”