What has the recent Ebola outbreak shown us about West Africa’s development? Did it reveal Africa’s weaknesses or its strengths? On 23 March, Hans Rosling, from the Karolinska Institute, and Margaret Lamunu, the World Health Organization’s Ebola expert, discussed how West African health systems tackled the Ebola outbreak, and what we can learn from the response as part of a live radio broadcast for the BBC’s A Richer World season.

What were the challenges in dealing with the outbreak, and what could be learnt from previous outbreaks? Hans Rosling said that it was clear in the autumn of 2014 that this outbreak was something different. The extreme contagiousness of the virus meant that it was threatening the world economy and world security. He decided to go to Liberia and ended up advising the Liberian government on how to tackle the crisis. He worked with Margaret Lamunu, who recalled her first experience of an Ebola outbreak in Uganda in 2000. 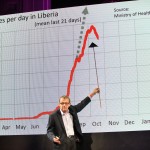 In 2000, the response to the outbreak was fast. It was contained whilst it was still in rural regions, before it reached the poor urban slums. This was crucial, said Hans Rosling, in stopping its spread. He pointed out that not many people have heard of the Ebola outbreak in 2000 because, “When you win in public health no one hears about it.” The difference between the 2000 outbreak and the 2014/15 outbreak is that in the autumn of 2014 the virus did spread to the urban slums, where it was much harder to contain due to the extreme poverty in the slums and the more densely populated area.

One of the vital things that Lamunu did in 2000 was to broadcast daily radio Q&A sessions to answer people’s questions about Ebola and to contain their fear. The importance of calming people’s fears and gaining their trust was emphasised by both Lamunu and Rosling. The fact that healthcare professionals have to go out into communities dressed from head to toe in protective spacesuit-like clothing is enormously worrying for the population.  But making sure that people were listening to public health messages and not letting their fears stop them from reporting cases, or conducting secret funerals was vital to contain the spread of the virus. 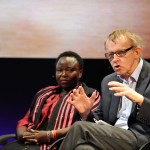 Rosling and Lamunu both stressed the amazing courage of the people in West Africa who mobilised to try and contain the outbreak. They both spoke of the long hours that people worked, and the impressive capability of everyone they worked with. Rosling said that although mistakes had been made, these people are heros, and it was their finest hour. The outbreak brought out the best in people.

Looking to the future, what could be improved?  We now need to provide further training to those who worked in this outbreak to consolidate their learning. Rosling pointed out that the three countries most affected—Guinea, Sierra Leone, and Liberia—are amongst the poorest countries in the world. They were already understaffed in terms of healthcare professionals before the outbreak and now many doctors and nurses have been lost to Ebola. So the need to train up young people is crucial. Lamunu also said that we need to look at each country individually and build up a new health infrastructure suited to each country’s specific need.

Finally the meeting ended with a sobering thought. The outbreak is not over yet. Hans Rosling spoke about a new case of Ebola detected in Liberia—a woman who is known to have had contact with 43 people. So although the meeting was a moment of reflection on how the outbreak has been handled so far, this was also a reminder that some of the lessons learned may need to be put in practice very soon.

Listen to the debate here.