Here’s a flavour of what’s new on thebmj.com today. 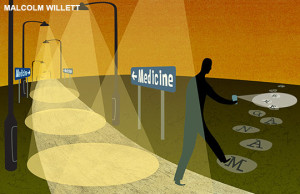 • Why would a hospital consultant go into management? Taking the job of NHS trust chief executive requires a doctor to ditch job security, probably earn less money, and be saddled with problems they don’t have the power to solve, finds Richard Vize. Dr Mark Newbold, a former NHS trust boss who has been through the mill himself, calls for strong and explicit support for new chiefs.

• The perils of whistleblowing. Exposing poor practice can be hazardous in India; in 2012 two chief medical officers were murdered in Uttar Pradesh after reporting alleged corruption. What protection do whistleblowers have?

Editorials
• Early discharge: how low can we go before patients are at risk? Peter Cram and Raphael Philip Rush discuss a new research paper on length of stay after hip fractures and urge caution before rapid discharge

News
•GPs in “David v Goliath” battle over out of hours tender. A new RCGP report argues that GPs who want to run out of hours services should not have to compete with large private companies.

•Food allergies. The risk of peanut allergy can be reduced by 80% by including peanuts in infant diets.

Rebecca Coombes, head of investigations and features at The BMJ.