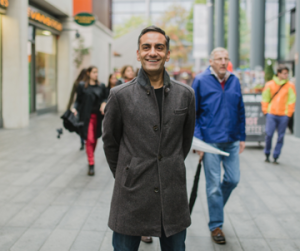 It’s pretty well understood that people from disadvantaged communities have more important things to worry about than their health. However, one general practitioner (primary care physician) in the southwest of England believes that if you start from what people actually want, you can eventually impact their health and wellbeing. That general practitioner is Dr Jonathan Stead, and, together with colleagues in the area, he’s established an approach that he delivers through a not-for-profit company called C2 Connecting Communities Ltd. He believes that it transforms disadvantaged communities and I was lucky enough to speak with him.

Pritpal S Tamber: Hi Jonathan. So, tell us a little about Connecting Communities?

Jonathan Stead: We’re a company that works with disadvantaged communities and their service providers to create what we call a “People and Services Partnership.” The partnership is a way to reconnect residents and their service providers, the aim being to improve health, wellbeing, and local conditions. We use a seven step model that’s been honed in the southwest of England since 1995, and was started by a health visitor, Hazel Stuteley, myself, and researchers at the Health Complexity Group from the University of Exeter Medical School. Our process leads to strong, self-managing communities where residents are at the centre of decision making supported by local service providers. We’re now active in over 30 neighbourhoods across the UK.

PST: There must be an underlying ethos to your approach; what is it?

JS: Our core belief is that residents are part of the solution, no matter how disadvantaged the community. Adopting this attitude never fails to surface significant local talent, but for it to flourish service providers need to adopt a facilitative, supportive approach. This is difficult because in the last few decades service provision has professionalised to become “doing to” communities, rather than “working with.” Seeing residents as part of the solution eventually leads to a subtle shift of power in the community, away from the providers and into a shared space between providers and the community. This shift is often uncomfortable for the service providers, which is why the first parts of the seven step model are about ensuring there is an “enabling context,” as we call it—effectively ensuring the senior leaders of the providers buy in to our core belief.

PST: So what’s the typical shape of a project?

JS: First of all, Connecting Communities, or C2 as we call ourselves, assign a site lead and he or she will spend the first two to four months establishing the “enabling context” I mentioned. He or she will meet with all the service providers in an area, describing our approach and sharing stories from where it’s been used in the last decade. The C2 site lead will conduct “walkabouts” with service providers and residents through local areas to get an understanding of the communities, and through this process they’ll identify the community in the area best suited for the work. Towards the end of the first two to four months, there is an “engagement meeting” where service providers and residents come together; how well that meeting goes indicates whether the “enabling context” has been established.

JS: If the service providers and residents are genuinely on the same page, they’re ready to learn together, in the same room. We hold a residential “C2 Experiential Learning Programme,” usually run over three days, which includes visits to sites that have previously gone through the C2 process so the participants can meet [those] that have transformed themselves and sustained that transformation over the last decade. After the residential programme we hold a “listening event,” usually about two months later, which leads to a resident led, provider supported, agenda for action.

PST: That’s great. But going back for a second, if the “enabling context” has not been established, then what?

JS: If there is a feeling that C2 is being imposed, transformation of a community is highly unlikely. We think it’s wise to do more preparatory work, having more conversations, and return when the time is right. That’s what we advise.

PST: OK. So let’s assume the resident led, provider supported, agenda for action is in place and being acted upon; how do you know if it’s working?

JS: For residents, the key test is whether the area feels different. This may sound vague but this feeling is crucial to enduring transformation in a community. There are two parts to this: ensuring that residents feel listened to and making it easier for service providers to help the community. When we start, the issues identified by residents are often small and easily solved, such as more dog poo bins, better bus shelters, or tidying open spaces. Addressing these quickly is key to further developing the trust needed to tackle the bigger issues in the area; in essence, these “quick wins” change the dynamics within communities. We keep an eye on the routine data collected for an area and the first thing we notice is a reduction in antisocial behaviour. This is great but we know that what really matters are the relationships between people, that’s what complexity theory tells us.

PST: Complexity theory? What do you mean and does this explain your link with the Health Complexity Group at the University of Exeter?

JS: Our interest in complexity started when we tried to understand why most large scale improvement interventions in the National Health Service (NHS) had little effect. We learnt that top-down initiatives were never likely to succeed because the idea that the NHS is a linear, hierarchical organisation is plain wrong. It’s actually a collection of relationships—between people, professions, departments, communities—that gives the impression of being linear and hierarchical but it’s not. It’s the same for communities; you have to understand—and affect—the relationships within them to influence change. Understanding disadvantaged communities as complex adaptive systems was actually the key insight that led to the C2 approach and it remains the lens with which we see all of our work. Relationships are the key to everything.

PST: Fascinating. Your engagements are usually 18 months long but do you typically see the projects continuing after C2 leaves?

JS: Usually within 18 months people—both residents and service providers—feel that things are improving, so new ideas emerge and the partnership has its own momentum and continues to self-organise. For instance, in east Kent a local community prioritised and then improved a local park that was overgrown and unsafe, and, as a result, the local school now conducts wildlife walks and holds some classes outside. With the park now cleared and safe, the community are thinking about how they can use the space to meet the ongoing needs of the community.

PST: That’s great. What do you think is the single most important barrier to overcome to make this kind of approach the norm?

JS: In a local community it’s always about the “enabling context,” and the same can be said about the regional and national level. The last thing any disadvantaged community needs is another time limited, theme based project thought up by a government department. The agenda for change should emerge from the community itself, supported by service providers. For the latter, it’s essential that they can access relatively small amounts of money at short notice, something that’s not always easy for them to do. We believe this is the way to generate sustainable transformation of disadvantaged communities, leading to improvements in health and wellbeing.

Residents as part of the solution, establishing the “enabling context,” a subtle shift of power, and whether the area feels different, these are ideas that rarely surface in the average community intervention. And yet Jonathan and Hazel’s decade long experience in and among disadvantaged communities tells them that these are the things that matter. Connecting Communities is increasingly seeing interest from primary care groups in England, many of whom are struggling with seemingly intractable—and worsening—health issues in low income neighbourhoods. You can learn more about C2’s work through Hazel Stuteley’s TEDx talk, and contact Jonathan by email.

Competing interests: I attended a C2 Experiential Learning Programme in March 2014 to better understand what they do and they kindly waived the normal fee.