What links blogs to logs (wooden ones)?

“LOG-BOARD. Two boards shutting together like a book, and divided into several columns, in which to record, through the hours of the day and night, the direction of the wind and the course of the ship, with all the material occurrences, together with the latitude by observation. From this table the officers work the ship’s way, and compile their journals. The whole being written by the mate of the watch with chalk, is rubbed out every day at noon.”

The journals for transcribing the chalked contents of the log board were called log books, ship logs, or simply logs, of which two were commonly kept: a harbour log and a sea log. For an individual to be logged, “recording the omissions of an officer,” was a very serious punishment.

The Oxford English Dictionary (OED) logs the earliest recorded use of “log board” in Samuel Sturmy’s Mariner’s Magazine of 1669, but the shortened form “log” didn’t appear until the mid 19th century, and it wasn’t used until the start of the 20th to refer to records other than nautical ones: the successive depths achieved in drilling a well (1913), the events on a lorry driver’s journey (1924), and details of radio and television broadcasts (1937). The log at Abbey Road Studios was recently used to recreate a day in the life of the Beatles, 11 February 1963, when they recorded their first album Please Please Me.

Web logs emerged in the early 1990s, soon after the invention of the world wide web. Originally “a file storing a detailed record of requests handled (and sometimes also errors generated) by a web server” (OED), “web log” soon came to mean “a frequently updated web site consisting of personal observations, excerpts from other sources, etc., typically run by a single person, and usually with hyperlinks to other sites; an online journal or diary.” Or, as defined more simply in the Independent (2000), “a site where you post your thoughts whenever the muse strikes.” “Web log” jocularly became “we blog,” and hence “blog.”

I started writing articles on medical words under the general heading “When I Use a Word” (WUW) in 1996, when I recounted an amusing discussion during a ward round. I didn’t foresee that I would go on to generate over 100 such articles, in The BMJ and elsewhere. Nor did I anticipate the interest they would arouse. Few people ever write to me about my forays into the worlds of adverse drug reactions or philosophy of science, but my WUW postbag is large.

One correspondent wrote to ask if he might use my pieces as translation exercises for his Hungarian students. I can’t comment on the results—my Hungarian is too rudimentary (oh all right, non-existent). 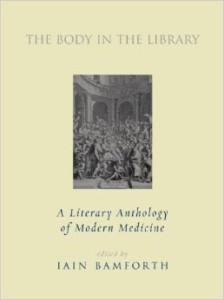 One article has even been anthologised, by Iain Bamforth, in a book (pictured left) in which I found myself rubbing shoulders with such names as Dickens, Daudet, Kierkegaard, Kafka, and Fanny Burney.

So WUW is now blogging on. Entering the blogmos, blogiverse, blogosphere.

A blogoholic or blogomaniac is an overzealous blogger, often a single issue fanatic who writes about the same topic, day in day out, blogging it to death. I shall certainly avoid that, and blogorrhoea too, I hope. Instead, I aim for mind-bloggling [b]logodaedaly.