Rabies is a neglected tropical disease that predominantly affects the most vulnerable humans—children living in the most disadvantaged areas of the poorest countries.

Many countries have successfully reduced the impact of the disease by tackling the gap between public and animal health through a concerted “one health” approach.

A clinical review examines the prevention and management of the disease, looks at the global burden, trends in control and elimination, and who is at risk. 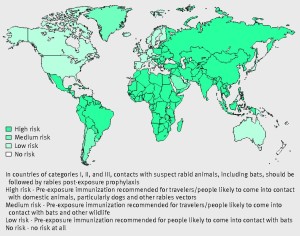 A second education article asks, Is it a stroke? Stroke lacks a perfect diagnostic test, and current diagnosis relies on clinical history and examination, supported by brain imaging (such as computed tomography and magnetic resonance imaging, which can be normal).

The article describes how patients present, and what other conditions may mimic a stroke and lead to “overdiagnosis.”

Most screening tests do not save lives, according to a research news report about a systematic review published in the International Journal of Epidemiology.

Researchers from the Stanford School of Medicine in California evaluated evidence from 39 screening tests for 19 diseases in which mortality is a common outcome. They found 48 randomised controlled trials and nine meta-analyses that evaluated disease specific or all cause mortality.

In an accompanying comment, Peter Gøtzsche of the Nordic Cochrane Center in Copenhagen, Denmark, argues that screening is fraught with difficulties including overdiagnosis. “Screening is popular, but we need to be much more careful in the future when we contemplate approaching healthy people with our screening tests, and should demand much stronger evidence than when we treat patients,” he wrote.

A second research news story reports that the number of patients with stage IV colorectal cancer who undergo primary tumour resection in the US has decreased significantly over time, but survival rates have improved, and surgery may still be overused.

The authors of the paper, published in JAMA Surgery, conclude: “Despite the availability of more effective chemotherapeutic options, a considerable number of patients with stage IV colorectal cancer continue to undergo primary tumour resection.

Our findings indicate potential overuse of primary tumour resection among these patients and highlight a need to better understand the clinical decisions and outcomes associated with that treatment.”

And a third research news story says people who develop Alzheimer’s disease show signs of depression and apathy before they start to experience memory disturbances. All participants showed increasing depression and other non-cognitive psychiatric symptoms with increasing age, but this rise occurred earlier and more quickly in people who went on to have dementia diagnosed.

“Our sample demonstrates significant non-cognitive declines associated with eventual progression to a clinical diagnosis of dementia,” said the research group, led by Catherine Roe, of the Department of Neurology at Washington University School of Medicine in St Louis, Missouri. They said that more research is needed to better understand the correlation between non-cognitive changes, healthy ageing, and different subtypes of dementia.

David Payne is digital editor, and readers’ editor, The BMJ