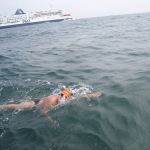 As soon as I opened The BMJ Christmas paper, Captain Webb’s legacy: the perils of swimming the English Channel, I knew I was in for something different. The Channel fare I’m used to consuming often begins with lazy questions, such as: “If you need a pee in the water, can you get on the boat”’

Answer: “No. You’d be disqualified, and if you’re swimming in billions of gallons of water, why would you want to?”

This paper was, interesting, informed, and authoritative, and the accompanying short film by Martin Freeth also brought memories flooding back of my own solo Channel swim in 2005.

After hours in the cold water, my jaw felt just like the disconnected jaw in the film’s Matthew Webb graphic, and I’m sure my onboard supporters thought I was communicating accordingly. 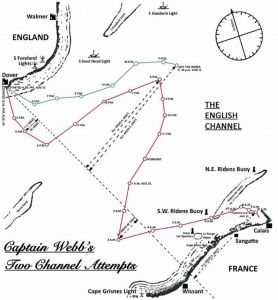 The authors of the paper were spot-on in identifying the need for cold water “habituation” or, as it is sometimes now known, “cold water acclimatisation.” For me, this is perhaps the most important aspect of modern Channel swimming.

It’s 50 years or more since swimmers regularly had to be taken out of the water because of the cold, despite being coated in lanolin (a white, sheep wool fat that made them look like they were covered in baked Alaska). Now, swimmers train for months, or even years, to get their bodies used to the low temperatures—sans grease.

Sting in the tale—the perils

The film tackled the “perils” of Channel swimming, such as the jellyfish sting. In my experience, being stung by a jellyfish in the Channel was like receiving a small electric shock. It actually made me want to swim faster, to get away. It can, however, be dangerous. An experienced pilot (safety boat skipper) told me that a swimmer he was accompanying was stung full in the face by a jellyfish. When her tongue began to swell up, he had to drag her on board and rush her full speed to hospital.

Lion’s Mane jellyfish, mentioned in the paper, tend not to be to be found in the English Channel, but they are abundant in the Irish Channel, where their painful stings have ended many attempted crossings.

One swimmer I know twice had to be taken to hospital because of Lion’s Mane stings and was going to give up further attempts until someone suggested he should try “cows’ udder grease.” This heavy industrial product is used as a barrier cream to protect cows from nettle stings.

He phoned the wholesaler and ordered two kilos, but when the delivery van turned up at his city home the first thing he was asked was: “Where’s the farm?” When he told the driver there was no farm, he was then asked: “What are you going to do with it then?” The situation got a bit strained when he replied: “Rub it all over my body and swim between Scotland and Ireland.”

It took a lot of persuasion before he was allowed to make the purchase, but he was—and he was successful on his next Irish Channel swim.

I can relate personally with the experience recounted by the Channel swimmer in the film who had hallucinations. This is not uncommon, but it tends only to last for very brief periods, until the brain is able to establish exactly what is going on in the huge, cold, stormy wasteland of water it has found itself in.

One theme that is raised far more frequently by Channel swimmers, and that isn’t mentioned in the paper or the film, is the deliberate use of psychological coping mechanisms—including visualisation.

Many Channel swimmers—I would even suggest a majority—have tried to deal with the pain, exhaustion, and isolation of swimming in the cold sea for long periods, by escaping into what some call “the zone”—a meditative parallel state. Some achieve this by singing songs repetitively or reciting poetry. Others do maths, and one I know even calculates tax returns. Many try to visualise themselves “somewhere else.” In my case, I travelled through the streets of my home town; a friend of mine visualised herself walking the hills in the Scottish Highlands.

In fact, it might be an interesting topic for a paper in The BMJ—comparing the success rates of Channel swimmers who use meditative techniques and those who don’t.

Like the swimmers in the film who talk about their compulsion to eat high carb and high fat foods during their swim build-up, I ate lots of ice cream during my training and the craving for food even affected me during my swim. About 10 or 11 hours into my crossing, I found myself obsessed with massive slap-up meals of bangers and mash, or steak and chips. That was quite surprising, as I’d been a vegetarian for 26 years.

Putting weight on before an attempt appears to be common among Channel swimmers. Being successful in taking it off afterwards perhaps less so. I can testify to that. Another useful paper might, therefore, look at the preponderance of fatty tissue build-up in the liver, or abnormal liver function among former Channel swimmers—a true peril of Channel swimming.

One of the marvellous things about Channel swimming is that it is a sport in which the individual pits himself or herself  against the elements, not against other people. Anyone over the age of 16 can train for it, and no amount of money will buy participants an advantage. Everyone starts on a level, as you can only use a standard costume, cap, and goggles—no wetsuits.

I loved the way that the Channel isn’t competitive in the way that pool swimming is. Channel swimmers all tend to help each other, because no swim is ever exactly the same as another. Wind, waves, tides, and the skill of the pilot all contribute to the end result, and the finest pool swimmer may give up long before the determined plodder if they haven’t the mental toughness that is so crucial.

I understand what the authors mean when they say “the top three male swimmers in the English Channel were 12% faster than the females.” But we wouldn’t necessarily describe our surgeons as being “top” because they were the fastest, would we?

That’s why I would suggest that Alison Streeter is, for many people, the “top” swimmer in Channel history. She’s swum the Channel 43 times, including three double swims and one three way crossing (yes, there, back, and there again).

Jackie Cobell might be for many the top Channel swimmer when it comes to determination. She took 28hr 44min to swim to France, because she kept going when most men would have given up. Then, for example, there’s Rosalind Hardiman, who completed a solo crossing in 2009, despite not having the use of her legs because of polio.

Frank Chalmers is a journalist and editor. He has interviewed more than 90 Channel swimmers from across the world as part of a book he has just completed on swimming the Channel.