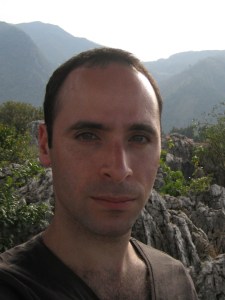 When I begin each day I feel like I know what to expect. I have been in and out of west Africa since June, and watched this sad story developing both as a direct witness on the inside, and as an observer from afar when back home.

In the Ebola treatment centre where I work, I always go to look at the large board of patients’ names at the start of my day. How many have died overnight, and how many will be discharged to singing and clapping as “cured?”

I’m less upset by the deaths than I was before—they have become a regular part of the day. Much like breakfast or dinner. It is now the arrival of new ambulances and what they represent that challenges me. More patients, but only a snippet of what exists beyond the comfort of the treatment centre walls.

Those who are lucky enough to make it to the treatment centre emerge bleary eyed after the long, hot journey down potholed and bumpy roads. Led by strangers dressed in the now iconic yellow suits to a bed, given a blanket, toothbrush, and some food. There is an unwritten observation among those of us who have been here a while: the patients who arrive and immediately lie down are usually the ones who don’t get back up. Their stoic expression tells nothing about where they are coming from and what they have seen. Families and communities crumbling. Women watching helplessly as their husbands die only to succumb to the same illness. Knowing that if their children try to help them, they simply become the next link in the chain, and so on.

Every admission is a symbol of a tragedy that is not being told.

On this particular day, one of the ambulances arrived carrying four patients already confirmed to have Ebola. But when we opened the doors we found five. Among the patients were two young children, who had already been sick for a week, and their mother, who was completely well but who had come thinking she could stay and care for them. An Ebola treatment centre is not just about supporting the sick, it is also about physically separating the infected from the healthy to try and curb the transmission.

I sat with the mother to try and understand if she might also have any sign of infection. She told a sober story of taking her children from clinic to clinic, looking for help, only to finally be isolated with them, deprived of food and water. Once the result of their blood tests confirmed that they had caught Ebola, she continued to look after them as no one else would. In the ambulance another patient was already bleeding. The risk of exposure to her is huge, but she remains completely well with no complaints other than those of a mother concerned for her children.

After giving her something to eat and drink, I explained the care we would provide and made sure she knew how to call us for updates. Ebola is a disease that does not care about circumstance or ethics. When I uttered the words, “No Madame, you cannot go with them,” it may also have been the last time she will see her children alive.

Most of our patients come from holding centres where they are first tested. It is hard to know the quality of care that is received there; I think it would be fair to say it is variable. The stories of what is happening out in the community are as worrying as ever. Villages in crisis, fields not being ploughed, children and women dying from preventable diseases and childbirth. What I see is just a slice of the true disaster that is unfolding in the green hills around me.

Our sickest patients remain inside the high risk area, where full personal protection equipment must be worn. The key to working in high risk is to keep it as simple and efficient as possible. I try to know exactly who, where, and what I will be seeing before entering. I have all equipment for procedures ready and a good idea of what I want to achieve. I also make sure that I know when I’m going in so I can time that I don’t stay there too long and risk getting overheated in the suffocating suit. The last thing I do is look at the sky; the weather makes an enormous difference to my level of tolerance in the personal protection equipment. 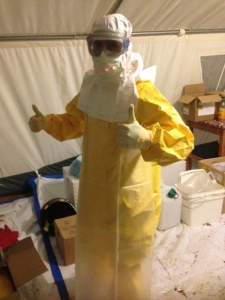 It is a pleasure to see the daily discharges; despite all the layers of personal protection that separate healthcare workers from their patients, you can become strangely close to them. Often recovering patients will take a couple of weeks before they are ready to be discharged; watching patients’ metamorphosis from fatigued, aching, and withered into energetic, smiling, and eager is something short of magical. Children orphaned that you can finally pick up into your arms and let them remember what it is to feel human touch.

We, the workers, all carry our heads high with pride during discharges, but the reality is that we offer little to save lives here. Nutrition, hygiene, and “supportive care” are the cornerstones of what we provide, and for a significant group it seems to work. With the development of newer treatments in the pipeline that might all change, but for today this is what we have.

The day does not really end, just the shift changes. The national staff work incredibly hard, and while I will get to leave soon, they will continue to be the ones who carry the greatest burden of this disease until the epidemic is finally stamped out. For them this is personal too; colleagues, friends, and family have died—sometimes inside our own centre. Their previous lives of working in community clinics have disappeared and the work that they were doing before in securing a better future is now all on hold. Schools have stopped, financial security is precarious, and great concerns exist around personal health. Without their stamina to come back every day and keep going, there would be no hope of achieving anything in this battle.

Benjamin Black is a London based obstetrics & gynaecology registrar, with an interest in humanitarian emergencies and their impact on the reproductive health of affected populations.

He worked in Sierra Leone with MSF earlier this year in an obstetric referral centre. As the Ebola crisis unfurled his activities adapted alongside it. He returned to Sierra Leone in October, working in the Ebola management centres and providing support for pregnant and lactating women infected with Ebola both here and in Liberia, as well as providing hands on support and training when needed.

Read more from Benjamin Black on his MSF field blog and from our teams working on the west African Ebola outbreak.

MSF and Ebola
MSF began its Ebola intervention in west Africa in March 2014 and is now operating in Guinea, Liberia, Sierra Leone, and Mali. The organisation runs six Ebola case management centres with a total capacity of more than 600 beds.

Since March, MSF has admitted more than 6400 people, of whom approximately 4000 tested positive for Ebola and 1700 have recovered. MSF currently has some 270 international staff working in the region and employs 3100 locally hired staff.

For the latest information on our work on the west Africa Ebola outbreak, please visit msf.org.uk/Ebola