Tranexamic acid is a synthetic analog of the amino acid lysine. It is used to treat or prevent excessive blood loss during surgery and in various other medical conditions. An older analogue, epsilon aminocaproic acid, was temporarily withdrawn worldwide in 2007 after studies suggested that its use increased the risk of complications or death. Tranexamic acid, on the contrary, is considered to be a very promising drug. It is inexpensive and has been included in the WHO list of essential medicines.

Jashvant Poeran and colleagues have evaluated the effectiveness and safety of perioperative tranexamic acid use in patients undergoing total hip or knee arthroplasty in the United States in a large retrospective cohort study, which includes 872 416 patients. They report that tranexamic acid was effective in reducing the need for blood transfusions, while not increasing the risk of complications, including thromboembolic events and renal failure.

Reducing blood loss and the need for blood transfusions in orthopaedic surgery is a major issue. These data provide incremental evidence of the potential effectiveness and safety of tranexamic acid.

In a related Editorial, Katharine Ker and Ian Roberts ask if we can now conclude that tranexamic acid is safe for routine use in joint replacement surgery. They say this would be a premature recommendation, but that it is surely time to resolve this uncertainty in an adequately powered randomised controlled trial.

Now for something completely different:

If two 95% confidence intervals for a population mean or percentage do not overlap, then it can always be inferred that two treatment groups differ significantly in outcome at the 5% level of significance. Philip Sedgwick tells us that the contrary isn’t true. It is a common misinterpretation that overlapping 95% confidence intervals for two treatment groups implies that there is no significant difference between the groups in outcome at the 5% level.

Lastly, for something completely different once more. I had the opportunity recently to see the wax model collection in the Josephinum in Vienna, upon an invitation of the vice rector of the Medical University of Vienna, Christiane Druml.

The Josephinum is an important legacy of the Age of Enlightenment in Austria. It was founded in 1785 as a medico-surgical military academy, which would train prospective doctors and midwives for civil and military service according to novel teaching methods.

The famous collection of wax anatomical and obstetric models is the result of a personal initiative of the Austrian Emperor Joseph II. Inspired by the wax models in “La Specola” in Florence, which were commissioned by his brother (the Grand Duke of Tuscany and later Emperor Leopold II), Joseph II ordered 1192 models for the newly founded academy in Vienna. These were produced in Florence between 1784 and 1788 under the supervision of director Felice Fontana and anatomist Paolo Mascagni, and eventually arrived in Vienna after a wearisome journey over the Alps.

They were intended to serve on the one hand as visual aids for teaching, but on the other hand they were, even then, intended for the general public. The majority of the models survived to this day, and they are exhibited in six rooms in their original rosewood and Venetian glass display cases.

The anatomical correctness of these wax models is fascinating. I was even more impressed by their artistic value. 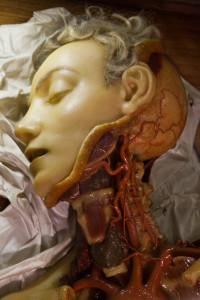 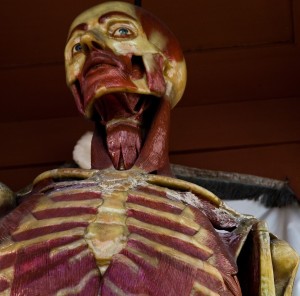 (The above pictures were placed at the disposal of The BMJ by the Josephinum. (c) Alexander Ablogin / Josephinum)

Georg Roeggla is an associate editor for The BMJ.