State of healthcare in June 2014

Three weeks before the start of the current Israel–Gaza conflict, the Palestinian Ministry of Health in Gaza declared an emergency, saying that they were unable to maintain health services owing to a lack of sufficient electricity and necessary supplies. Elective operations had to be cancelled. Thirty per cent of essential medications were out of stock.[1]

Healthcare in Gaza has been under extreme pressure since 2007 because of the ongoing blockade imposed by Israel. This has resulted in significant difficulties in the sourcing of medical supplies, and in providing citizens with access to specialist care.[2] Three previous Israeli military operations in Gaza (2006, 2008-9, and 2012) had already caused considerable damage to the healthcare infrastructure.

In a report to the United Nations Relief and Works Agency (UNRWA) on the state of the Gaza health sector in June 2014, Gilbert [2] stated that: “The gravest threats to public health is the lack of basic determinants for healthy lives: safe water, food security, human security, housing, paid work, education, and, of course, also access to sufficient healthcare services.”

The report also revealed that children were suffering immensely, and that a large proportion were affected by malnourishment caused by the blockade. The prevalence of anaemia in children under 2 years stood at 72.8%; while the prevalence of wasting, stunting, and being underweight was documented as 34.3%, 31.4%, and 31.5%, respectively.

The report concluded that: “Any hope for improving the health and quality of life of Palestinians will exist only once people recognise that the structural and political conditions that they endure in the occupied Palestinian territory are the key determinants of population health.”

State of healthcare in August 2014

The current Israeli operation in Gaza began on 8 July 2014. After a month of intense bombardment, the Palestinian death toll at the time of writing is 1948 (of which close to 25% are children) and 9875 wounded, according to UN figures.[3][4] The UN has declared the situation “a humanitarian and health disaster of widespread proportions,” and medical services and facilities are on the verge of collapse.[5] Any hope of stabilisation or improvement of the pre-existing healthcare crisis in Gaza has been set back years.

The UN humanitarian coordinator in the occupied Palestinian territory, in a joint statement with UNRWA and the World Health Organization, expressed “grave concerns” for the lack of protection for medical staff and facilities, as well as for the people of Gaza’s deteriorating access to emergency health services.[5] They stated that a third of hospitals have been destroyed or damaged due to shelling, and several clinics, ambulances, and healthcare facilities have been directly targeted (see table, click to maximise image). The Ministry of Health estimates that Gaza’s ambulance service is running at only 50% capacity owing to a lack of fuel. A nurse and an administration manager were killed after Israeli airstrikes in their immediate vicinity, and at least 38 healthcare staff have been injured.[6] 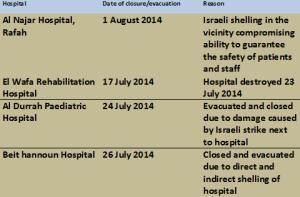 Evacuation and closure of Gaza Hospitals in 2014 [7]

The UN humanitarian coordinator maintained that “international law sets out clear obligations on the parties to the conflict to respect the status of hospitals and medical facilities as protected objects, to respect the status of and ensure the protection of medical personnel, to ensure the protection of civilians, and to respect the fundamental human right to health.” On 28 July, WHO issued a statement deploring what it described as “the continuing trend for healthcare facilities, staff, and vehicles to come under direct fire in Gaza.” [6] The British Medical Association expressed deep concern at the shelling of medical facilities in Gaza, and demanded that the principle of medical neutrality be respected. [8] Despite this, the shelling of hospitals by Israeli forces continued during the conflict.

The lack of adequate protection for health facilities and staff not only impedes emergency assistance to the injured, but also restricts access to healthcare for patients with acute and chronic illnesses. [6] Owing to the widespread violence, 40% of medical staff are unable to reach their clinics, and half of all primary care clinics are closed. [5] Only two of six community mental health clinics in Gaza are functioning, and drugs for patients with mental illness, trauma, and anxiety are in critically short supply. [6]

Hospitals remaining open have been inundated with casualties, many of whom have complex multi-trauma injuries, and they are struggling to cope. David Nott, a British surgeon currently volunteering for the Red Cross at Al-Shifa Hospital described vividly how “most of the operations we’re doing are on children and young people. They come in with crush injuries, and massive fragment wounds from shells and bits of buildings.” [9]

There are also worries that dense inert metal explosives (DIME) and flechette shells have been deployed in densely populated civilian areas. DIME weapons release immense direct force, cutting through skin, muscle, and bone. Flechette shells spray out thousands of potentially lethal metal darts, shredding the flesh of those they hit. [10]

The acting head of the office of WHO operations in the West Bank and Gaza Strip declared: “the ability to provide necessary healthcare is being severely compromised. This puts the lives of thousands of Palestinians in needless danger.”[5] Critical supplies of medicines are almost depleted and, after Israeli bombardment destroyed the only power station in Gaza, hospitals are dependent on unreliable backup generators.

Public health threats arise from the ongoing destruction, the displacement of 460 000 people in Gaza, and damage to the water and sanitation infrastructure. People are now living in overcrowded conditions in schools and shelters and, combined with the lack of adequate water and sanitation, there is a serious risk of waterborne and communicable disease. [5]

The UN, the BMA, and Physicians for Human Rights-Israel, among others, have voiced grave concerns that the Israeli army has targeted medical facilities and personnel. [8] [11] [12] Such targeting must cease immediately and medical neutrality must be upheld. The Palestinian Ministry of Health has called on all sides to respect medical staff to allow “hospitals to function day and night [and for] ambulances to be able to move everywhere in the Gaza Strip.”

It’s been reported that medical teams are being prevented from entering Gaza through the Rafah crossing. [6] Borders must be opened to enable urgent medical supplies in, and to allow complex cases to be referred to specialist services outside of Gaza. Humanitarian passage is crucial for the survival of the population of Gaza. The UK based charity Medical Aid for Palestinians (MAP) reports that Al-Shifa hospital, the main tertiary referral centre in Gaza and one of the few functioning healthcare facilities, desperately needs all kinds of supplies and equipment—ranging from basic supplies to ICU beds, operating tables, and lighting for the operation rooms. [6]

Hospitals have been forced to discharge post-surgical patients to overcrowded shelters with inadequate sanitary facilities. Doctors on the ground describe how some patients cannot be discharged because they have nowhere to go, including children who cannot be discharged because their families have been killed. [6] The Ministry of Health has called on UNRWA and the Red Cross to ensure the provision of recovery centres, so that patients can recuperate from their injuries in a sanitary environment and release hospital beds for more urgent cases. [6]

Upholding the right to health

The current situation is an acute and extreme exacerbation of the pre-existing pressure put on Gaza’s healthcare system owing to the blockade over the last seven years. A healthcare system needs not only medical supplies, but fuel, electricity, personnel, and adequate referral facilities, as well as adequate provision for chronic conditions, in order to function.

Health is fundamentally more than just the right to medical care in an emergency. The Universal Declaration of Human Rights recognises that the right to health can only be upheld in an environment in which there is safety from mortal danger, freedom of movement and employment, adequate food, shelter, and sanitation.[13] These fundamental human rights are violated by the ongoing policy of blockade and military operations in Gaza. We call on the Israeli government and the international community to ensure that these basic rights are respected immediately.

We ask our medical colleagues to join us in the demand for international standards to be upheld for the people of Gaza.

Jamila Sherif is a GP and clinical teaching fellow at the department of primary care and public health, Faculty of Medicine, Imperial College London.

Perviz Asaria is a registrar in cardiology and general internal medicine, and a Wellcome Trust clinical PhD fellow at the department of epidemiology and biostatistics, Imperial College School of Public Health.

Nadya Rahman is a GP in Greater London.

[2] Gilbert, M. Brief report to the UNRWA: The Gaza Health Sector as of June 2014.
http://www.unrwa.org/resources/reports/brief-report-unrwa-gaza-health-sector-june-2014

[11] Physicians for Human Rights-Israel. All measures must be taken to avoid injuring medical personnel and endangering medical facilities and teams whilst fighting continues in the Gaza strip. http://www.phr.org.il/default.asp?PageID=190&ItemID=1975

[13] The United Nations. The Universal Declaration of Human Rights. http://www.un.org/en/documents/udhr/index.shtml