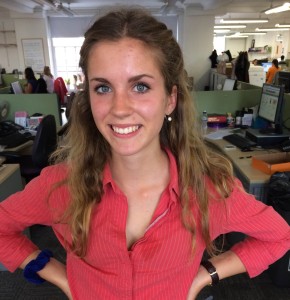 I am a GCSE student currently doing a few days’ work experience at The BMJ. On my first morning, yesterday, I went with Krishna to the Science Media Centre (SMC) for a news briefing about biomarkers for Alzheimer’s, which was the source of today’s story. The SMC is in the Wellcome building on London’s Euston Road, and launches many of the health and science stories that hit the news. When I went, I knew less than nothing about Alzheimer’s disease; when I came out I knew not much more.

However, I found the meeting absorbing and it was great to get an insight into the process of news management. It was interesting to see how a science news story can be a staged and planned event, rather than an old fashioned scoop.

The speakers were Professor Simon Lovestone, Dr Abdul Hye, Dr Ian Pike, and Dr Eric Karran. From my inexperienced perspective, I found the language they used scientifically advanced, if not over my head. I wasn’t expecting them to lower the standard of their language for a complete beginner like me; however, if I had had any specialist grasp of the topic then I might have felt that a press conference like this one simplified the story to some extent.

The question and answer section was somewhat enlightening. There was a distinction between those journalists who were there to provide their newspaper with the latest scientific knowledge, and those who wanted to know the juicy side of the story: that is, how much would all this cost.

In conclusion, the cookies were very nice, and I have decided to learn shorthand.

Isabel Brooks is with The BMJ on a work experience placement.