To be chosen as the subject of the first People’s Portrait was, as Simon Weston put it, a very humbling experience. But as he showed consistently throughout the beautifully crafted BBC film about the making of the portrait, he is a delightfully humble man.

But not in the way you might imagine I mean. Not passive or unctuous as in the mode of Dickens’ Uriah Heap. No. A strong humble. A servant with such a great commitment to helping people, inspiring people by his remarkable courage and frankness. He is not the classical hero figure rising up and charging towards a huge goal of his own imagining.

In one of the most telling of the conversations Fiona Bruce had with him, she asked him about his ambition…and he answered—without the clarity of a determined fighter for a specific cause—that “you’ll have to wait until I’m done,” or words to that effect. He was non-specific because, I’d say having known him for nearly 25 years, he is a man who ambitiously embraces many causes that uplift the human spirit, a warrior for good and justice. He doesn’t know what they are but when he finds them—or they him—he gives his all.

I’ve seen him on stages with young people as his audience, but equally at home and compelling with the leaders of industry, commerce, medicine, and the military. And he is writing children’s stories too.

He is all about uplifting, as he was uplifted by his mother, his Welsh community, and all the medics who worked on his face and body. It’s as if he is passing on the kindness and inspiration that he received to so many others. 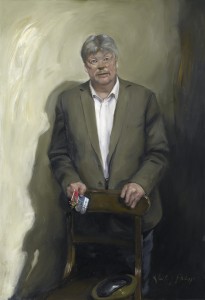 His portrait is of a strong man with a chuckle of humour in the eye, one gnarled hand resting gently on the oak chair, the other unassumingly holding his medals. It is a fitting tribute indeed. The nation thanks you for painting him so powerfully, Nicky Phillips.

Changing Faces is a BMJ charity.

James Partridge OBE is founder and chief executive of Changing Faces, the leading UK charity supporting and representing people with disfigurements (www.changingfaces.org.uk). He is also founding director of Dining with a Difference, a disability consultancy company.