The survivors told me their stories before a backdrop resembling a World War One battlefield. A splintered tree trunk jutted from the flattened landscape and the rotten smell was unmistakeable. One woman told how she had clung to a tree top, terrified, as the wave approached, roaring like a low flying aircraft as it crashed around her. She watched from her bleak vantage point as her village and family—her world—was raked away.

This was Banda Aceh in Indonesia shortly after the 2004 Boxing Day Tsunami. During the past few weeks, as the scale of the devastation in the Philippines has become clear, my mind has often returned to the people I met during my visit there as I know Haiyan survivors face many of the same challenges. When the searches find more people dead than alive, the immediate sense of panic about the wellbeing of loved ones merges with the uncertainty about the future, anxieties so acute it’s hard to conceive how people bare them.

Yet bare them they do and what’s often underestimated is the ability of people to be agents of their own recovery. After disasters such as the Tsunami or the Typhoon the first responders are not international aid organisations, but friends and family members who pull each other from the rubble, who dust each other down, who help each other make sense of what’s happened, and help each other begin to rebuild. 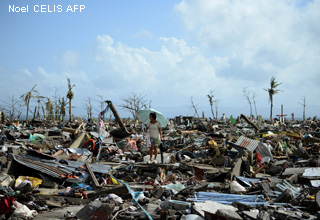 But with the sheer scale of the devastation they of course need some help in these toughest days of acute need. In many parts of the Philippines the health system has been literally washed away, including very many medical personnel. Doctors of the World was one of the few health charities already on the ground  when the typhoon struck, so we were able to respond swiftly, sending a team of Filipino doctors to help those in the worst affected areas. The quick and generous response of our supporters at home meant we were able to fly 50 tonnes of medical supplies, including essential medicines, water pumps, and cholera kits to help combat the very real threat of disease outbreaks. But so much more needs to be done.

Which is why the timing of the BMJ Christmas Appeal in aid of Doctors of the World UK is serendipitous in its significance. The BMJ readers have the very real chance to make an impact on the health of people around the world whose lives have been torn apart by the wolves of disaster, poverty, disease, and violence. In these situations, we try to help the most vulnerable with a particular focus on maternal and child health as well as those excluded from mainstream healthcare.

And as with all our emergency responses we will not just be there for the short term. We try to rebuild and build back better with sustainable, self-sufficient health programmes that are not a substitute for local and national health services but which build the capacity of local people, local doctors, local nurses and midwives to meet local health needs long after we leave.

Although it’s not just those in the Philippines who need help this Christmas. Syria is bracing itself for its coldest winter in years after months of horrific war. Mali is still rebuilding its broken health infrastructure after its own internal nightmare. In and around the Central African Republic, a country in chaos, hundreds of thousands are dying and destitute due to the ongoing tensions. On our doorstep, Greeks must make the choice between buying medicines or buying food after the collapse of their economy. Doctors of the World are helping out in all these places too.

The image of the World War One battlefield haunts me. It’s been a long time since the world has needed its doctors more than it does right now.

Please support the BMJ Christmas Appeal for Doctors of the World by donating:

Leigh Daynes, executive director of Doctors of the World UK.