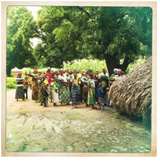 In 2012, MSF projects in several countries saw an important increase in cases of malaria, and a prolonged peak in areas of seasonal transmission. More than six emergency interventions were launched to fight this increase.

While the past decade has seen drastic improvements in the response to malaria (rapid diagnostic tests, affordable artemisinin based combination therapies, and strategies relying on trained community healthcare workers) this 2012 experience showed that several challenges remain, including the scaled-up use of injectable artesunate for severe cases, outbreak response, and addressing malaria in areas of high seasonal transmission.

In the latter case, recent studies in West Africa have shown how seasonal malaria chemoprevention (SMC) can be effective at reducing cases of both simple and severe malaria [1]. Because of these findings, in March 2012, the World Health Organization recommended that all children aged three to 59 months, living in areas where more than 60% of malaria cases occur in less than four consecutive months, be given monthly therapeutic doses of sulphadoxine/pyrimethamine (SP) and amodiaquine (AQ) over the course of three to four months. On the first day of each cycle, children take both SP and AQ, then for the next two days they take AQ alone—a course that provides protection from clinical malaria for approximately one month.

Médecins Sans Frontières recognised the promise of the approach in certain circumstances, and conducted SMC interventions in 2012 for the first time outside of research conditions in regions of Mali and Chad with high seasonal transmission. Malaria hits particularly hard during the rainy season in Koutiala, Mali, and Moissala, Chad, especially affecting children under five who are each estimated to contract malaria two to three times from July to November. MSF supported structures have required a constant increase in beds, staff, and services in past years in order to treat the targeted population.

Roll out of SMC required extensive negotiations and coordination among a variety of actors on the ground. The first step required discussions with central government authorities and communication with health structures and communities, especially since SMC was not yet national policy in either country. Local representatives of the Ministry of Health were crucial in laying the groundwork. The next steps included training health personnel and community health workers, setting up systems to test, treat, and refer serious cases for in-patient care, and, finally, organising the drug distributions. The campaigns in both countries depended on close collaboration between MSF and the Ministries of Health, between medical and logistics teams, as well as between staff conducting SMC and staff running regular health programmes.

The programme in Mali covered a whole district, providing chemoprevention to an average of 159,317 children per month for three months, while the programme in Chad covered an average of 10,231 children per month over four months. This difference in scale required different distribution approaches. In Mali, for example, 276 pairs of community health workers went door-to-door in communities with fewer than 500 children, while 87 fixed distribution points were set up in communities with more than 500 children. By contrast, the project in Chad relied mainly on fixed sites, in some cases adapted to nomadic communities.

Preliminary results are encouraging, with substantial reductions of simple and severe malaria seen in both Mali and Chad. We are still collecting and analyzing data, and the impact that we see until now is only from patients seen at MSF’s medical facilities.  We also did not conduct active case finding in the community. In the pediatric ward of the Koutiala hospital supported by MSF a reduction in cases of severe malaria and all cause transfusions in the paediatric ward was sustained post-SMC intervention. In-hospital mortality attributed to malaria fell from 14.5 to 4 deaths per week. While SMC has become accepted policy in both countries and will be implemented in several Sub-Sahel countries in 2013, drug alternatives to SP and AQ are urgently needed and systems of pharmacovigilance need strengthening.

In general, though, this real world application of SMC appears to have been effective for reducing the burden of malaria in areas of high seasonal transmission. Fewer episodes of malaria will not only improve health indicators for children, but could have an impact on child development in the form of better school attendance and performance. And beyond giving us another tool for combating malaria, SMC also offers a great opportunity for health personnel to implement other preventive activities, such as vaccination or screening for malnutrition.