The symbol of the Tohono O’odham, a native American tribe, is a man in a maze (see below). All of us, they believe, are born into a maze. We have to make our journey through the maze to try and reach the centre of peace and serenity. Often we are lost, and when we are lost, say the elders of the tribe, we must go back to the beginning. At the moment the whole Tohono O’odham people are deep in the maze, and going back to the beginning may be the best way for them to go forward. 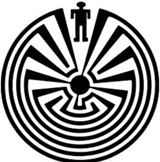 I had the privilege last week of spending a whole day with the Tohono O’odham people, meeting the leaders of the tribe as part of the University of Arizona’s conference New Frontiers in Global Health Leadership. We met in the new and beautifully designed Cultural Centre of the tribe. It’s close to the centre of the 2.8 million acres of the land of Tohono O’odham, all of which is desert and mountain. The Cultural Centre looks across the desert to the striking profile of the sacred mountain of the people, Baboquivari Peak. The Tohono O’odham believe that this mountain is the navel of the world, where the first people emerged.  High on the mountain is a cave of I’itoi, one of the three gods who created the world. The Tohono O’odham travel there to make offerings to I’itoi and to pray. In past days when they were attacked by Spaniards, Apaches, and other tribes, the warriors would climb to the cave to seek strength.

The desert between Cultural Centre and the sacred mountain is not empty, sandy desert, but desert filled with mesquite, cactus (the big ones 250 years old), and for those who know how to find them a whole host of edible and medicinal plants, including tepary beans, chola buds, and wild spinach. The desert is beautiful, still, and sweet smelling, but this can be a very hostile environment—baking hot on summer days and freezing cold on winter nights. Our people believe, said Bernard Siquieros, the curator of the Cultural Centre, that by eating the plants that are strong enough to survive the heat of the summer and the cold of the winter we grow strong.

This is a land with long horizons, across the often flat desert to the distant mountains. The land of the Tohono O’odham is 2.8 million acres, an area the size of Connecticut.  The United States has 566 registered tribes, but the land of the Tohono O’odham is the second biggest tribal land area in the country—after the Navajo Nation. (I must confess that—perhaps like you—I had never heard of the Tohono O’odham, whereas I have heard of the Apaches, Navajo, Sioux, and Cherokee. The Tohono O’odham know that they are not as well known as they would like.) Originally their land was much bigger, stretching north to Phoenix, south to Hermosillo in Mexico, West to the Gulf of California, and East to Colorado. But in the 19th century without consulting the Tohono O’odham, the US and Mexican governments drew their border through the lands. “We didn’t cross the border, it crossed us,” said Verlon Jose, the Chairman of the Chukut Kuk district, one of the 11 districts into which the land is divided and the one with the longest border with Mexico.

It is being on the border that presents the Tohono O’odham with one of their biggest challenges. Although the desert may look still, “all kinds of things are happening out there,” said Jose. Some 700 to 800 people a day are trying to cross into the US across the desert, said Ned Norris Junior, the Chairman of the Tohono O’odham people (the Chairman is the equivalent of the President in the US, is elected, and serves for a limited term). Nobody knows exactly how many people are trying to get through, but, according to Norris, it was very few until 9/11 and the North America Free Trade Agreement (NAFTA), but then increased to 200 a month and then to 1500 a day.

The big increase is because of the “funnel effect.” The land of the Tohono O’odham has a 75 mile border with Mexico, and the people are very clear that they will not allow a high fence to be built across their land—not least because for centuries and until very recently they moved backwards and forwards across the border without interference. Either side of the tribal lands there is a fence, and so both illegal immigrants and drug runners are funneled into the lands of the Tohono O’odham.

Many of those who try to cross the desert do not make it, and bodies and human remains are found regularly. There is also a lot of litter and danger, particularly from those running drugs. Jose described how he has been held up at gunpoint more than once.

One result of all this is that many of the Tohono O’oldham are nervous about venturing into the desert to collect traditional foods and medicinal plants. This in its turn contributes to two of the other major problems of the people: obesity and diabetes. The people who spoke to us spoke wonderfully and often with great humour, but it was impossible not to observe that most of them were obese, many of them morbidly so. And half of the adults are diabetic, one of the highest prevalences in the world.

The nation has comprehensive programmes to prevent and manage diabetes, obesity, cancer, and domestic violence, and there is “the HOPP” (Healthy O’odham Promotion Program). But these programmes face a formidable task, and there is perhaps a deeper problem—the decay of the traditional culture of the Tohono O’odham.

Siquieros described to us a summit of the people to try and answer the question, “What is our culture?” The first answer was “language.” The culture is embedded in the language, and the people have strong oral traditions, passing down stories from generation to generation. There was no written language until the mid 80s. Few people can read or write the language, but the older people all speak it. An exhibit in the museum showed, however, that fewer than 10% of people under 18 speak the language.

The brute statistics of language are that any language that has fewer than a million speakers is likely to disappear. There are around 30 000 enrolled members of the Tohono O’odham tribe with 14 000 living on the tribal lands, 1400 across the border in Mexico, and 14 000 in other parts of the US. Many of those people do not speak the language, and so despite the energy of the people running the Cultural Centre there must be anxiety that the language will disappear.

The second answer to the question of “What is our culture?” was “ceremonies.” Many of these are no longer practised, and Jose told us about his son trying to remember all the songs and words from one particular ceremony where only two elders still remember everything.

“Values” was the third answer, and Siquieros told us that the traditional values include respect (for each other and the land), sharing, family, and industriousness. We saw the sharing in all of the presentations with each one being shared by several people. Leadership among the Tohono O’oldham is inclusive.

The mention of family reminds some of a terrible time earlier in the 20th century when children from the tribe were taken from their families and sent to boarding schools hundreds or even thousands of miles away. The children might be beaten in those schools for speaking their own language. One woman told us of how her grandmother had been sent to boarding school. The Boarding Bus would tour the tribal lands looking for children to catch. “Like dogcatchers,” I couldn’t stop myself saying. “The result,” said the woman, “was that mothers didn’t know how to mother and children didn’t know how to be mothered.” If you want to destroy a culture you take away the children.

The fourth answer to the question was “foods.” When people walked long distances harvesting the desert they had both lots of exercise and healthy foods. Diabetes was rare. For centuries even millennia the Tohono O’odham lived in harmony with their hostile environment. They have been displaced from most of their lands by people living lives that are not sustainable. It’s hard to see this as progress.

Most of our party came away uplifted by a fascinating day. I was hugely impressed by the Tohono O’odham’s attempts to overcome their problems, which, they pointed out, they needed to take the lead in solving. I did, however, feel fearful about the future, but when I asked Siquieros about the future he said he felt very good. He saw young people wanting to rediscover the culture of the Tohono O’odham, going back to the beginning of the maze.

Competing interest: RS spoke at the conference. His fare to the conference and his living expenses were paid by UnitedHealth, his employer.

RS was the editor of the BMJ until 2004 and is director of the United Health Group’s chronic disease initiative.