We have too many metropolitan acute hospitals and failing ones should be closed, said UK nursing leader Peter Carter in a front page story in Friday’s Times newspaper.

He is right, says the newspaper in a leader article, and should be joined by other powerful voices, perhaps to silence the nostalgia junkies who mount campaigns each time a much loved Victorian infirmary is threatened with the bulldozer or property developer.

A post colonial country that laps up period drama and boasts about the pomp and pageantry of its royal weddings and jubilees gets hot under the collar whenever a hospital is faced with closure, even if its replacements have the same clinical staff, are state-of-the-art, and designed by a celebrated architect.

But is it just our national obsession with the past that explains our sentimality to old hospital buildings, and is it peculiar only to the UK? The NHS is often described as the nearest thing we have to a national religion, so perhaps these crumbling edifices are somehow sacred to us in the way that churches are to Christians.

A Spanish friend tells me that its state run health care system, which is in the grip of a similar period of change to the NHS, faces similar opposition when local hospitals face closure. I can’t somehow see Americans taking to the streets when a privately owned hospital, erected in a gentler age, is reduced to rubble.

A media management workshop I attended last week unpicked the furore caused when Goscote Hospital, Walsall, closed in 2006. The hospital was built in the 1930s and treated TB patients until the 1970s, when it became a nursing home and geriatric unit.

There was fierce opposition to its threatened closure after it was seized on by someone campaigning for a local council seat, despite the fact that it treated only a small number of patients requiring rehabilitation. It isn’t just at local level that passions run high. In 2001 hospital doctor Richard Taylor successfully fought a Parliamentary campaign based on his opposition to the closure of A&E services at Kidderminster Hospital, where he worked until 1995.

I’m more guilty of this nostalgia than most. One of my favourite YouTube clips is a poignant photographic tour of Nottingham Children’s Hospital. In an echo of today’s David Cameron’s Big Society, a philanthropic lace manufacturer bequeathed Forest House, his mansion, to the city in 1901. It closed as a hospital in 1978, four years after I’d had an appendectomy there. I spent more than two weeks in a Nightingale ward named after Margaret Jenny Player, scion of the local tobacco baron and a major benefactor.

Are we appeased when a new use is found for an old hospital building? Sometimes, yes. Earlier this month I joined my colleague Guy Rughani at the opening of a gallery to commemmorate the life of Elizabeth Garrett Anderson,  Britain’s first woman to qualify as a doctor. The gallery is now part of the new headquarters of public sector union Unison.  Like St Pancras Station down the road, the hospital she founded stood derelict for years. Wings were demolished, fireplaces ripped out, but getting it listed stopped the rot and its restoration gives a flavour of the original colour scheme and the medical institute where its female staff met to chat and read journal articles. 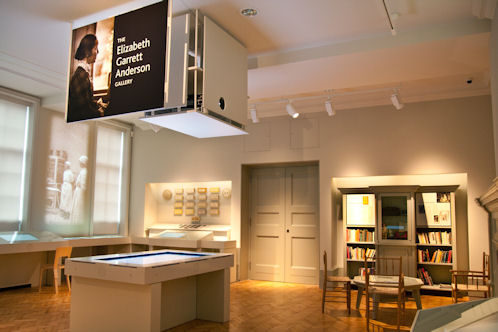 But looking at today’s Times list of crumbling Victorian hospitals that have no place in a 21st century NHS, I wonder how many galleries, penthouse flats, and luxury hotels, (St George’s Hospital at London’s Hyde Park corner is now the Lanesborough) we actually need?