A powerful tool to protect governments from tobacco industry interference remains underutilised, while the tobacco industry stepped up its meddling in health policy during the COVID-19 pandemic. This is the main finding of the Global Tobacco Industry Interference Index (Index) which reviews government efforts in 80 countries to implement Article 5.3 of the WHO Framework Convention on Tobacco Control (FCTC). Article 5.3 is an obligation in the treaty that empowers governments to end the tobacco industry’s decades of manipulation and deceit that derail efforts to protect public health.

The Index, a civil society report, was first initiated by the Southeast Asia Tobacco Control Alliance (SEATCA) in 2014 and reviewed seven countries in Southeast Asia. Years later, governments still single out industry interference as the main obstacle to their tobacco control efforts. This global Index, supported by the STOP project, reviewed 80 countries in 2021 (Figure 1). Using the same questionnaire developed by SEATCA, it ranks countries based on compliance with recommendations in the Article 5.3 implementation guidelines: the lower the score, the lower the level of interference. 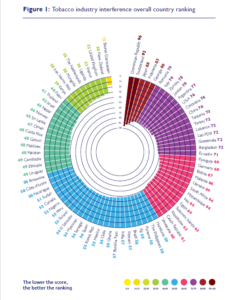 The 2021 Index found no country or region was spared from industry interference. The COVID-19 pandemic did not stop the industry from advancing its business even though smoking is a risk factor for more severe COVID-19. Instead of limiting interaction with the industry to only when strictly necessary, rejecting tobacco-related charity, and removing industry benefits, as recommended in the guidelines, many governments instead succumbed to a slew of industry tactics.

Chile, Cote d’Ivoire, Ethiopia, Gabon, New Zealand, Netherlands, and Norway reported not receiving tobacco-related corporate social responsibility (CSR). Myanmar and Philippines have restrictions on CSR activities but accepted charity from the industry during the pandemic. However, credit must be given to the Philippine Department of Health, which released a Department Memorandum reiterating an existing Joint Memorandum Circular, reminding all staff that no donations or assistance from the tobacco industry can be accepted.

The WHO FCTC considers CSR activities a form of sponsorship because the industry uses charity to promote itself and repair its damaged image. Contributing to COVID-19 funds set up by heads of states is a tactic the industry exploited during the pandemic. Tobacco companies made contributions to such funds in Kenya, Georgia, India, Pakistan, and Turkey. As these were high-profile funds, contributors received positive publicity. Philip Morris International (PMI) reported a three-fold increase in this kind of opportunistic charity for 2020.

In Georgia, following protests from local civil society groups about the fake charity from tobacco companies, the government removed the logos of British American Tobacco (BAT), PMI, and Japan Tobacco International from its StopCov Fund website, where the government publicized companies that donated.

The adage, there is no such thing as a free lunch, applies to the tobacco industry. In several countries where CSR contributions were reported, the tobacco industry appears to have benefitted from tax breaks such as a delay in tax increases, tax exemptions, tax reductions, lower tax rates for new tobacco products, or allowing late tax payments. For example, there were no tobacco tax increases in Malaysia, Pakistan, Tanzania, or Zambia in 2020.

The WHO FCTC is unique in that it is the only international treaty that regulates an entire industry. If Parties implemented this treaty effectively, tobacco use would be significantly reduced, and millions of lives saved. However, during this pandemic, the tobacco industry persuaded at least 10 governments that their industry and cigarettes are “essential” and obtained permission to continue manufacturing tobacco and selling cigarettes during lockdowns. Governments that banned tobacco production during the lockdown were challenged by tobacco-friendly departments to reverse their decision, or in the case of South Africa, sued by BAT.

The tobacco lobby has also convinced lawmakers in several countries to treat new tobacco products differently and favorably. Policymakers in Kenya, Lebanon, Egypt, Spain and Vietnam were persuaded to regulate electronic nicotine delivery systems (ENDS) and heated tobacco products (HTPs) differently from conventional tobacco products and, in some cases, even reverse previous bans on them.

This Index, the third in the global series, shows that 18 countries improved compared to the previous year, while 31 countries deteriorated during the pandemic. Argentina, Indonesia, and USA, which are non-Parties to the WHO FCTC, are among the countries that deteriorated. They were joined by new entrants to the survey, including the Dominican Republic and Switzerland, also non-Parties, who showed high levels of industry interference. The sooner these countries accede to the WHO FCTC, the closer they move to protect public health from the tobacco epidemic.

There is hope as several governments have made progress towards protecting their policies from tobacco industry interference. Botswana approved its tobacco control law, which limits interaction between the government and the tobacco industry and prohibits partnership with or granting incentives to it. The Ministry of Health and Family Welfare of India adopted a code of conduct restricting the collaboration of officials with tobacco industries. The Cambodia Ministry of Education, Youth and Sports banned all forms of partnership with the TI among educational facilities. These LMICs give hope to low-resourced countries that implementing Article 5.3 is not an expensive measure. Instead, it is a powerful tool that can stop the industry from inflicting more harm to society.

The Global Tobacco Industry Interference Index is an initiative under STOP, funded by the Bloomberg Philanthropies.

The authors declare no conflict of interest.