Nearly 30 years on, the tobacco industry appears to be doing very well at nurturing its alliance with the International Labour Organization (ILO). In a May 2015 press release on its website, the ILO announced an agreement to “develop global guidance on hazardous child labour and occupational safety and health in tobacco growing” (a somewhat ironic goal for a product that kills 6 million people a year).

The agreement is with the august-sounding ‘Eliminating Child Labour in Tobacco-growing Foundation’ (ECLT). The ILO press release has a paragraph about the ECLT Foundation:

‘The Eliminating Child Labour in Tobacco Growing Foundation is a global leader in preventing child labour in tobacco agriculture and protecting and improving the lives of children in tobacco-growing areas. ECLT strengthens communities, improves policies, and advances research so that tobacco-growing communities can benefit from agriculture while ensuring that their children are healthy, educated, and safe.’

In reality, ECLT is an alliance of tobacco companies and growers – a front group for the industry. ECLT’s stated intention may be to ensure tobacco-growing communities can ensure that their children are healthy, educated and safe, but the reality is that it is an industry that profits from people who overwhelmingly become addicted to its products as children, and which inflicts enormous hardship and poverty.

According to the ILO website, the agreement with ECLT “will promote tripartite action to ensure children do not perform this work”, and “its development will be facilitated by the ILO with advice from experts from the tobacco sector, academia, and others, and will include tripartite consultations.” It also states that the “results of efforts supporting social dialogue on combating child labour in agriculture in the three target countries will feed into the IV Global Child Labour Conference, to be held in Argentina in 2017.” Initiatives such as this provide the industry with the opportunity to have a seat at the policy table, among respected organisations and sometimes Member State Delegations, an effective counter to its status as a pariah industry.

The ECLT has been a key tobacco industry strategy in the wake of several damaging revelations about the extent of child labour within the industry in recent years. While the ILO website gives little away about the real nature of the ECLT, there is no such coyness on the Philip Morris (PMI) homepage, which displays the ILO logo as part of a promotion about Philip Morris’ child labour corporate social responsibility initiatives.

PMI’s ILO logo prompted the Pascal Diethelm, president of the Swiss health organisation OxyRomandie to write in January to the Director General of the International Labour Organization to draw attention to possible illegal use of the logo. He noted the importance of Article 5.3 of the WHO Framework Convention on Tobacco Control (FCTC) to prevent tobacco industry interference in the policies of international organisations of the United Nations. Allowing the use of the ILO logo on the homepage of a tobacco multinational would appear to violate Article 5.3, and is particularly surprising given the ILO logo is legally protected and ‘may not be used without express permission, which will only be granted when appropriate in very limited circumstances’. At the time of publication, the ILO has yet to respond. (Read the letter here: 20160127-oxyromandie-letter-to-ilo-re-logo-on-pmi-website). 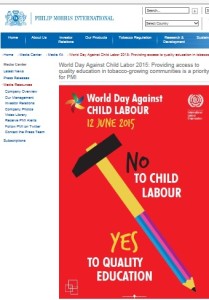 The OxyRomandie letter is not the first time the ILO has been alerted to the issues of collaborating with the tobacco industry. In August 2013, Dr Mary Assunta of the Southeast Asia Tobacco Control Alliance wrote to then director of the International Program on Child Labour at the ILO to inform the agency of its obligations under the FCTC. She raised concerns about ILO endorsement of the ECLT, noting that it was likely in violation of FCTC Articles 5.3 and 13, and outlined the problem of the tobacco industry being given a platform to gain access to policy makers through its corporate social responsibility initiatives. She called on the ILO to dissociate itself from the ECLT and set a definitive deadline to completely halt child labour in tobacco farming. She also received no response. (Read the SEATCA letter here: 20130813-seatca-letter-to-ilo).