The national week of Tobacco Control in Vietnam kicked off with a ceremony held on 25 May. Organized by the Vietnam Committee on Smoking or Health (VINACOSH), it attracted 450 participants from the National Assembly, Government Offices, related Ministries, WHO Vietnam, Tobacco Control Working Groups, mass media and students.

Dr Sarah England from Bloomberg Philanthropies expressed congratulations for the approval of Vietnam’s new tobacco control law and conveyed an official letter of Michael Bloomberg, Mayor of New York city to the Vietnam Prime Minister for the great achievements of Vietnam in curbing the tobacco epidemic. The Vice Minister of Health, Vietnam conveyed his appreciation and acknowledged the considerable support of all ministries, sectors and mass organizations, international donors (Bloomberg Philanthropies, SEATCA) for the cause of tobacco control in Vietnam. Click here to read more and see photos from the event at the SEATCA webpage. 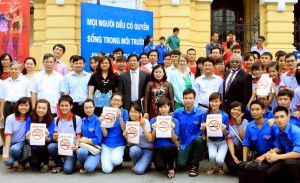 VINACOSH, together with a coalition of Vietnamese health groups and international NGOs including the World Lung Foundation, collaborated in an innovative effort to use online media to engage the public around implementation of a new smoke-free law.

The effort combined broadcast television spots with an online petition at vn0khoithuoc.com (‘smoke free Vietnam’) and Facebook page to grow awareness of which types of public spaces were covered by the new law, and to allow people to pledge to support the law and share the campaign with their friends through social media. The effort also included a mobile short code that allowed supporters to SMS in their support. Vietnam has 143 mobile subscribers for every 100 inhabitants, so learning how to best use mobiles to support tobacco control advocacy is very important for the success of future campaigns.

Mobile and social media efforts were particularly energised by a partnership with the Youth Union of Vietnam , a steadfast supporter of tobacco control policies in Vietnam, who sent out the word and provided ‘on the ground support’ in the form of hundreds of youth demonstrating at press conferences, attending campaign events, using social media and SMS to build supporters for the online campaign, and going business-to-business to provide smokefree signs and alert owners of their new obligations under the law. Already, almost 3000 supporters have joined the community online, and the 500 person Facebook community is growing fast, with a vibrant community – mostly high school youth – who are sharing photos and ideas about tobacco control on the page.

The Hue Municipal People’s Committee in collaboration with the Vietnam Public Health Association hosted WNTD and national No Tobacco Week. The launch event was held with about 300 participants from the health sector, youth union, women’s union, labour union and delegates from provincial people’s committee, city leaders, representatives from government departments and other organisations. ‘Smoke-free city’ signage on all the municipal public transportation was also organized, with 1600 public transportation vehicles including taxis, buses, passenger cars, pedicabs and tourist boats to be badged with the “smoke-free city” sign in coming weeks.

A bike parade was held on June 9th 2013 with the theme ‘Environment protection and smoke-free Nha Trang city’. Supported by Nha Trang Municipal People’s Committee in collaboration with Vietnam Public Health Association and Khanh Hoa Provincial Public Health Association, the event attracted 2000 participants including many young people, as well as Mr Takeshi Kasai, Representative of WHO in Vietnam.

There were several other events including 500 balloons dropping with the message ‘environment protection and Smoke-free Nha Trang city’; a no smoking flash mob; dancing and some entertainment shows.