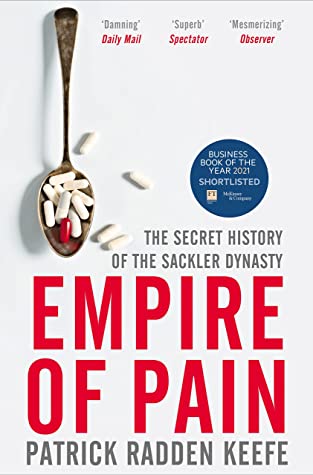 They say that life can be stranger than fiction, and this is truly how readers will feel after finishing each chapter of Patrick Radden Keefe’s well-researched history of the Sackler family. Prescription drug abuse is a common feature in international news, and whilst many people are aware of the opioid epidemic, they may only vaguely recognize the Sackler name. The link between the two has only recently come to light, and in this work Keefe digs into the story behind the opioid crisis in America, examining the family behind the scandal, their motivations, and the devastation that OxyContin has caused in the US and worldwide. In particular, Keefe explores the dangers of conflicts of interest in medicine and pharmaceutical companies’ ability to exploit loopholes in the law. He highlights crucial flaws in medical licensing but also makes readers think about how these principles could apply to other kinds of businesses.  The book is a deep-dive into a fascinating topic and is a worthy winner of last year’s Baillie Gifford Prize for nonfiction writing.

Keefe chooses to begin the Sackler family story with a legal meeting in 2019, when members of the family had been deposed by a group of lawyers. However, the rest of the book explores the complex set of factors that culminate in this legal case. The book is split into three sections—Patriarch, Dynasty and Legacy—allowing readers to follow the Sacklers’ journey themselves as well as the journey of the drug that helped the family amass their fortune. Keefe offers a new perspective on the story of the opioid epidemic, as much of the original journalism on the subject focused on the drugs themselves and on the pharmaceutical companies, with a conspicuous absence of the name “Sackler.”

In chapter 1, “A Good Name,” readers learn about the original three Sackler brothers (Arthur, Raymond and Mortimer) and, in particular, Keefe emphasizes Arthur’s tenacity and entrepreneurial spirit, qualities that make him a fascinating figure. As the firstborn American son of an immigrant family living in New York in the first decades of the twentieth century, he bore the burden of their expectations for success. He exceled at school and also started working at a young age to help support his family, even managing to singlehandedly keep them all afloat during the Depression as well as to fund his two younger brothers’ university degrees. He was a polymath, earning a medical degree while exploring his interests in arts and culture. He faced and overcame anti-Semitism. However, he was also highly flawed. He was a secretive person, both in his home life (he had multiple extra-marital affairs) and in his business dealings. He hid his conflicts of interest – he was concurrently a practicing doctor, the founder of a pharmaceutical company, the owner of a medical advertising firm, and the proprietor of a series of medical journals that ran adverts for the drugs he manufactured. It is hard to fully understand his motivations. Was he driven by a desire to help patients and change medicine? Or was he in in the business mainly for the financial benefit? Keefe leaves readers to draw their own conclusions and often paints an ambiguous portrait of Arthur’s character.

The second section of the book, Dynasty, Keefe explores the pharmaceutical business founded by Arthur and subsequently run by his brothers and their children: Purdue Pharma. Before the advent of OxyContin, the company had a history with another addictive medication; it developed and mass marketed Valium. Eventually they moved into the pain medication market, developing what we know today as OxyContin. Although this medication potentially offered significant benefits to people living with chronic pain, the Sacklers rushed OxyContin through the US Federal Drug Administration’s (FDA) approval process, which aroused some suspicion (in hindsight, such fast-tracking looks even more questionable as the FDA official who helped authorise this drug ended up on the Sackler’s payroll within a year). They downplayed the addictive qualities of the drug and adopted a strategy of “sell, sell, sell,” pushing the drug by paying prominent physicians to promote its use. Although their early actions could still be viewed as well-intentioned attempts to help those in chronic pain, they subsequently ignored all reports about the addictive nature of the drug, blaming victims as “drug abusers” even as members of their own staff became addicted to the medication. Whilst aggressive marketing of OxyContin continued and concerns started to arise, the family distanced itself from their source of wealth, giving generously to the arts and never publicizing their link with prescription painkillers. They rarely gave interviews, and in the early legal cases against their company other members of the team took the fall.

In the final section of the book, Legacy, Keefe explores the public’s growing discontent with Purdue Pharma and the work of many brave journalists and lawyers that exposed the company’s role in the opioid crisis. The narrative in this section is woven through with shocking statistics, with Keefe stating that more Americans have died from opioid overdoses than all wars since World War II. There are also more personal accounts of opioid addiction, including that of the artist Nan Goldin, who became addicted to OxyContin before going to rehab and eventually launching a movement in the arts community against the Sacklers by staging protests in the “Sackler Halls” of various institutions. In the UK, where I live, there are (or were) Sackler buildings, Sackler collections and Sackler scholarships. I even spent a few afternoons at university working in the Sackler library.

Keefe ensures he credits the work of other journalists who helped to uncover the Sackler story. One of the first was Barry Meier, who had previously covered the scandal around tobacco companies’ knowledge of the adverse effects of smoking. Meier broke one of the early stories about the dangers of OxyContin in 2001, but he was prevented from publishing any further reporting by lobbying from the Sackler family and newspaper editors. By 2002 the company had spent $45 million dollars fighting off lawsuits, but this was only a minor dent in their profits. And in 2006 the company was only successfully accused of “mislabelling” and “misbranding” their drug as not being addictive. The legal case is woven with intrigue, since the Sacklers managed to buy their way out of many complex situations. Eventually the family ended up in court, even though the court’s judgment was not what many who followed the news expected. The Sacklers were fined, but given immunity from further litigation.

Empire of Pain is a fascinating exploration of America’s opioid crisis from the perspective of the family-owned company that oversaw the drug’s development and marketing. Keefe shows how the Sackler family’s actions had a part in the creation of this now global issue. Although no particular individuals can be fully responsible for a problem of this magnitude, Keefe explores how the family members’ decisions had catastrophic consequences, especially the ways they exploited loopholes in the US legal system. The book is also meticulously researched (in part because Keefe faced the potential for so much litigation). Readers will enjoy Keefe’s storytelling skills, as he manages to synthesize the endless legal documents, copies of emails, and interviews with victims and other journalists, into a nonfiction story that reads like a thriller.