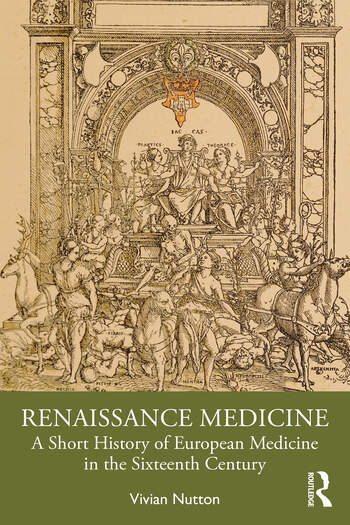 Vivian Nutton’s comprehensive Renaissance Medicine: A Short History of European Medicine in the Sixteenth Century, written largely during the pandemic, provides an overview of a century of medical transformations in Europe. Nutton is ideally positioned to write such an overview, as he brings to the task a lifetime of familiarity with the ancient Greco-Roman medical tradition (especially Galen and Galenism), the European Renaissance, and Vesalius. His formidable and intimate knowledge of original source materials in at least seven languages also adds authority to the book. As is typical of his prior work, he depicts the landscape of the period with the attention and skill of one of the residents of this sixteenth-century world, the artist Pieter Bruegel: like Bruegel’s paintings, Renaissance Medicine is vast and detailed, populated by individuals absorbed in their daily activities but also deeply connected to their communities.

Nutton’s sixteenth century begins in 1490, with the first printing of Galen’s collected works in Latin, and ends in 1600. His presentation of this period might be summarized by his own remarks on what it must have been like to listen to the Parisian anatomist Jacobus Sylvius’ lectures on Galen and anatomy, which Vesalius attended: “It was an exciting time to be a student, especially as the new information offered a great range of alternatives to the dogmatic Galenism of the Later Middle Ages. It was now possible to be both modern and traditional at the same time” (p. 253).

The book is divided into three sections: Contexts, People, and Beliefs. Chapters 1-4 provide rich details about the context of medical practice in sixteenth-century Europe. Chapter 1 (New Lands, New Drugs and New Diseases) discusses the new peoples, animals, plants, and lands encountered by Europeans. Nutton describes efforts to catalogue the drugs and diseases of the Old and New Worlds and to reconcile new discoveries with information recorded in ancient medical texts, such as those of Dioscorides. Chapter 2 (Protecting the Health of the City) feels particularly relevant for our pandemic-stricken world, with its focus on “town physicians, Health Boards and hospitals, for they were often interconnected and co-operated together, particularly in the face of epidemic disease such as plague” (p. 40). Chapter 3 (Medical Communication, Print and the Post) explores how sixteenth-century physicians developed and shared their ideas with one another; for this chapter, Nutton draws on an untapped source of information—correspondence between the physicians themselves. Chapter 4 (The Rediscovery of Ancient Medicine) describes the extraordinary wave of interest in Galenism, followed by its recession, as physicians’ exploration of and with these Galenic models led to recognition of their flaws and inconsistencies.

The second section centers on people. Chapter 5 (The Kaleidoscope of Healing I: Physicians) presents a remarkable group of practitioners, as Nutton uses his facility with original language source material to transmit, in lively detail, the educational and clinical experiences of physicians across western Europe. He highlights efforts to consolidate physician authority in colleges and guilds and presents fascinating details of the lives and work of the physicians to the wealthy and powerful. Chapter 6 (The Kaleidoscope of Healing II: Surgeons, Apothecaries and Outsiders) describes what Nutton terms “The Medical Penumbra,” which he defines as “healers and healing beyond the officially recognized bodies” (p. 163). This chapter, too, is peopled with fascinating characters, such as the Florentine “blacksmith-cum-dentist, Dominic the Teeth” (p. 164). Chapter 7 (On the Margins of Medical History: Women and Patients) discusses women’s role as healers, both as midwives (including those who were formally recognized as such by towns and governing bodies) and as domestic caregivers. Sixteenth- century perceptions of the female body are also included in this chapter. A brief section at the end focuses on patients.

The section on Beliefs explores the broader intellectual changes occurring within the medical communities of sixteenth-century Europe. Chapter 8 (Learned Medicine) returns to Galen and his critics, with case studies focused on specific physicians’ responses to Galenic medicine, as it concerns a variety of topics (the plague among them). Chapter 9 (Anatomy – The Touchstone of Modernity) draws on Nutton’s expertise in Galen and Vesalius, arguing that while “Vesalius may have changed the view of the human body as Copernicus had done for the universe” (p. 272), such progress in anatomical investigations followed a meandering and often thorny path among sixteenth-century physicians. Particularly fascinating is a discussion of how anatomical investigations revivified artists’ efforts to depict the human body in precise ways. Chapter 10 (Paracelsus and Paracelsianism) provides an overview of the context, life, and beliefs of its titular personage and serves as a kind of introduction to Chapter 11 (Religion and Medicine). These last two topical chapters focus on specific regions (England, Northern Italy, and Iberia in Chapter 11, and Germany in Chapter 10), linking the peregrinations of physicians and the transformation and expression of their ideas to the religious rifts of the period.

In his conclusion, Nutton explains his use of the word “kaleidoscope” in the titles of Chapters 5 and 6, noting that a kaleidoscope “also imposes boundaries that apply to all of its pieces” (p. 332). The term might be applied positively to the entire book, which is richly composed of thousands of details of medical thought and practice in sixteenth-century western Europe, arranged in an artful and accessible way (this also extends to the comprehensive footnotes and bibliography, trademarks of Nutton’s work). Renaissance Medicine is, as Nutton promises, an overview and handbook. Its strengths include an exploration of the period’s nuanced relationship with Galenic medicine and its elucidation of the vibrant communication networks among elite physicians. For topics given less extensive treatment, including non-elite healers, female healers, and patients, the book’s rich contextualization of these dimensions of sixteenth-century European medicine offers encouragement towards further research. A useful resource both for those new to the subject and for those looking for detailed primary source references, Nutton’s Renaissance Medicine is, like the kaleidoscope to which it draws an analogy, a bright vision of the past that will repay careful and repeated attention.

Katherine D. Van Schaik, MD PhD MA, is a physician at Beth Israel Deaconess Medical Center (Harvard Medical School) in Boston, MA, and a research affiliate of Harvard’s Initiative for the Science of the Human Past. Her PhD in History has led her to focus her scholarship on histories of medical decision making and the structuring of medical knowledge.