Book Review by Philip B. Berger 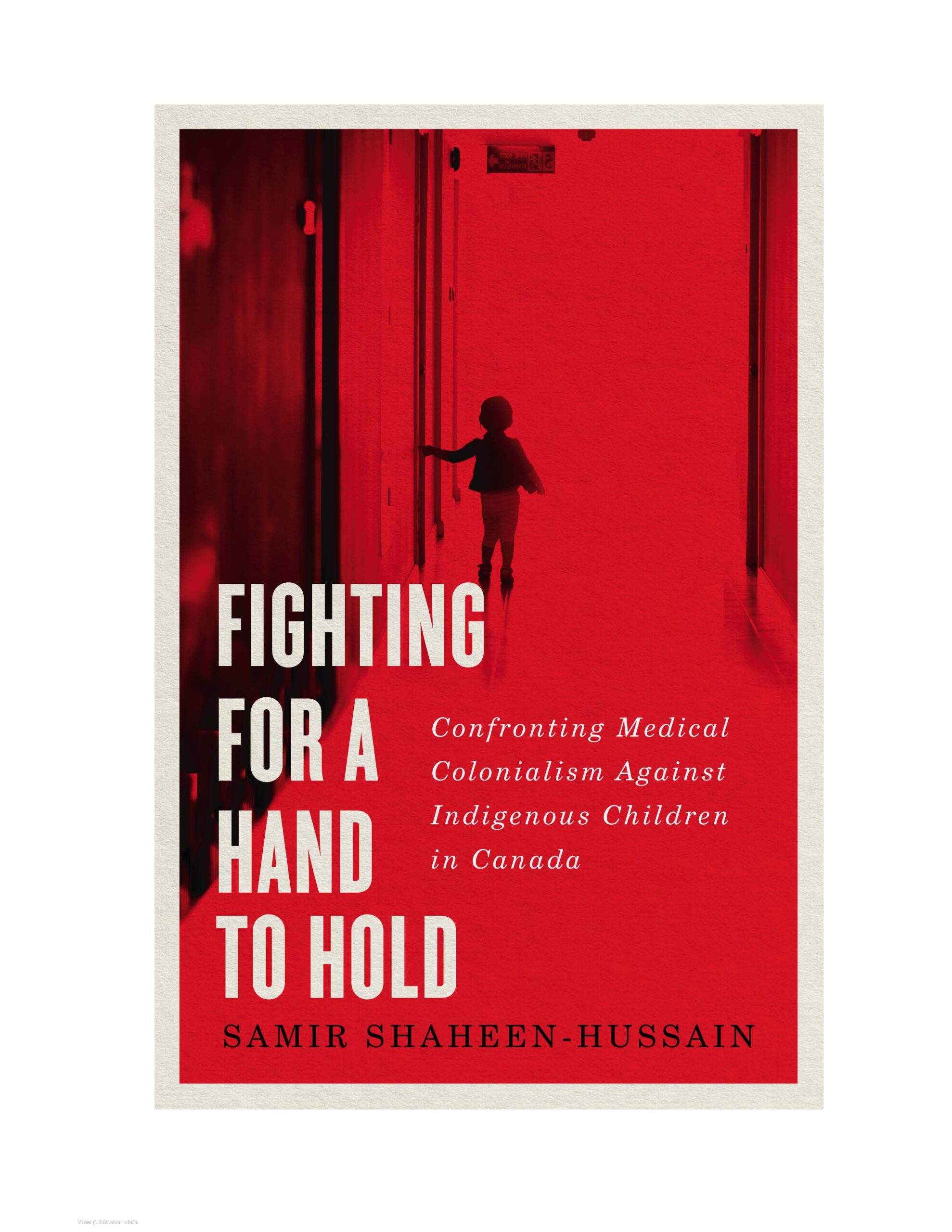 Samir Shaheen-Hussain, a pediatric emergency physician, does not hold back in his historical scholarship detailing the pain and death of Indigenous children, their parents and their elders, pain inflicted by us – health professionals – under the authority of the Canadian state and its colonial predecessor. As I took in his compilation of atrocities against Indigenous peoples, I felt caught, indeed trapped, in waves of emotional, existential, and intellectual horror – not necessarily a good starting point for a reviewer. Yet it is impossible to contain anguish and rage after reading account upon account of the abuse, often fatal, of Indigenous children catalogued in Fighting for a Hand to Hold.

Shaheen-Hussain does not lose the reader in theoretical precepts and mind-numbing statistics, though both strategies are integrated throughout. The book’s recitation of deliberately propagated illness, shocking numbers and pure hate is framed by the misery, suffering, and killing of real people with names. This focus on those who died or lived through “medical colonialism” and bore witness to the suffering of their communities is the only way to record Canada’s outrageous application of state and colonial power against indigenous people.

To be specific, the harrowing medical crimes Shaheen-Hussain documents include spreading tuberculosis and smallpox, performing punishing treatments and nutrition experiments on children, as well as forcing sterilization on Indigenous girls. The experiments and sterilizations were a form of eugenics, a topic covered in many histories of the early twentieth century, though it deserves repeated treatment lest the passage of time make us forget. What I found new and chilling was a chapter on the purposeful spread of smallpox by leaders of the pre–Confederation Colony of British Columbia. Placing infected and healthy people together at gunpoint in 1862 resulted in up to 100,000 deaths. And this event was only the beginning. One of the various paths these leaders took to destroy children and communities included forcefully removing children from their homes and detaining them in residential schools, including those with active tuberculosis, hence promoting the disease’s spread.

I had little idea of how meticulous our colleagues were in their killing plans. The story of a child named Louise Plaited Hair and a Dr. O. Edwards is sufficient to illustrate how medical professionals deliberately spread tuberculosis (unfortunately neither name is listed in the otherwise exhaustive index – I looked when trying to reread their story). Louise’s enlarged right neck glands were not enough for Dr. Edwards to designate her as showing signs of tuberculosis and preventing her admission to a residential school. Stories such as this one, which name individual victims and their perpetrators, remind us of the actual people behind the shocking statistics.

Even when medical treatment – rather than death – was the official objective, Indigenous children suffered needlessly. They received brutal tuberculosis treatments, such as mandatory immobilization with plaster leg casts (sometimes up to their chests) as well as surgical removal of ribs using only local anaesthesia. In one instance, doctors passed electric currents through the tuberculosis-infected body of an Ojibway girl in Manitoba. And at a time when oral anti-tuberculosis medications were widely available, Canadian doctors still performed lung resections on Indigenous peoples. In detailing these regimes of so-called ‘treatment’, Shaheen-Hussain does not hesitate to name the names of our medical colleagues.

For the chapter describing Canadian nutrition experiments on Indigenous children, he relies on the findings of Canadian historian Ian Mosby, first published in 2013. Mosby’s explosive scholarly exposé showed how, in the mid 20th century, thousands of children on reserves and in residential schools were subjected to nutrition deprivation, some with control groups. This research operated without any consent from the parents or the children themselves. Prominent physicians, such as Dr. Frederick Tisdall, a co-developer of infant pablum at Toronto’s world-renowned Hospital for Sick Children, oversaw these studies. I heard Mosby give a talk about his paper just after it was published, but it is always good, even necessary, to have the conduct of our colleagues and the government authorities reiterated. The children suffered and died. We can never forget.

Shaheen-Hussain does not spare anyone in his indictment of Canadian physicians and their governments. At a time when Indigenous female minors were compelled to undergo sterilization, he describes Tommy Douglas, former Premier of Saskatchewan and revered by many as the” father of medicare” in Canada, as a leading proponent of this practice. He also provides a detailed analysis of how Indigenous girls were disproportionately targeted for sterilization under the auspices of eugenic boards in British Columbia and Alberta (as well as other Indigenous women in the rest of Canada who were coerced into sterilization up to the 1970s).

As if smallpox, tuberculosis, nutrition experiments and the practice of eugenics on Indigenous children were not enough, Shaheen-Hussain also documents the harrowing history of skin graft experiments in the early 1970s on Inuit peoples, including minors in Nunavut. “Community consent” was purportedly acquired to conduct skin grafting between Inuit sibling children. Even former Nunavut Premier Paul Quassa was a subject of these experiments and publicly stated no doctors had asked for his consent. This chapter exposes a high-profile researcher who, along with a plastic surgeon, led the skin-grafting enterprise. Though these so-called ‘medical researchers’ deserve no memorializing, enunciating their names brings an authenticity to this horrendous story. Yet it is the victims’ names, always included in Shaheen-Hussain’s documentation, which should be burned into our minds.

To place such medical practices in their rightful ethical context, Shaheen-Hussain takes the reader through the history and interpretation of the United Nations General Assembly Convention on genocide. He concludes that all five acts of genocide under the Convention  apply to Indigenous peoples’ victimization at the hands of Canadian authorities and medical professionals. His conclusion reminds us that genocide is not limited to the other well known and well-documented historical examples.

Following the ethical principles that guide his book, Shaheen-Hussain brilliantly deconstructs some historians’ claim that historical accounts should avoid “presentism”, or the judgement of historical personages according to contemporary values and norms. Opponents of presentism argue that esteemed figures of their age, whose history includes actions and attitudes we consider abhorrent today, should not be judged by contemporary standards. These luminaries were simply “men of their age”, and it is unfair to invoke presentism when evaluating their historical contributions. Shaheen-Hussain turns this apologia on its head simply by pointing to the obvious: from the victims’ perspective, condemning these “men of their age” is entirely appropriate. Presentism need not be part of the equation.

Finally, Shaheen-Hussain intersperses the narratives of the abuse endured by Indigenous children with the record of his leadership and advocacy in their defense. He, along with others, successfully brought to an end Quebec’s practice of transporting minors in need of medical treatment – unaccompanied by a parent or family member – from remote Indigenous communities to major medical centres. Though I suspect that he will shudder at the praise, Shaheen-Hussain’s merging of activism and stellar scholarship is the exemplar of the 21st century practice of academic medicine. His book should be a mandatory reading for students in any health discipline and living in any country with a colonial past – that is a lot of countries.

Philip Berger is a long-time downtown physician in the Department of Family and Community Medicine at Toronto’s St. Michael’s Hospital and is an Associate Professor in the Temerty Faculty of Medicine at the University of Toronto. An Officer of the Order of Canada, he has worked in diverse settings including homeless shelters, HIV/AIDS clinics and most recently Toronto’s Native Men’s Residence “Place of Healthy Breathing” vaccine clinic.