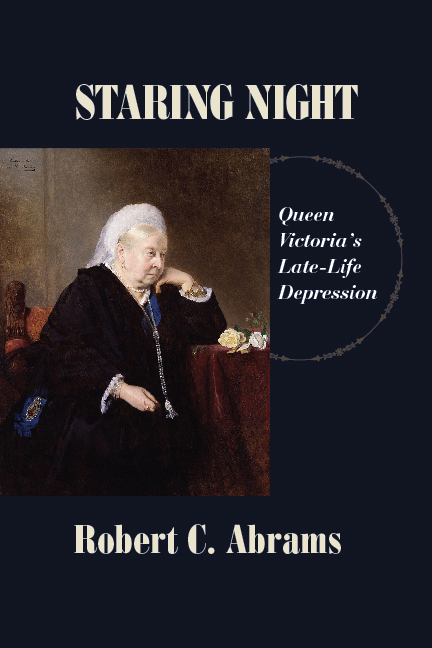 In the last few months of her life, Queen Victoria was solemn, sad, and fearful, yet remained dignified and desirous of accomplishing whatever she could. In 1900, the last full year of her life, she suffered bereavements of two close family members, her son Alfie and her grandson Christle. Her eldest daughter, Vicky, was suffering from cancer at the same time, although the Queen appeared hopeful about its outcome. The Queen’s close friend, Lady Jane Churchill, who had accompanied her to Osborne House, the royal residence on the Isle of Wight, died unexpectedly on Christmas morning 1900, just four weeks before the Queen’s own death on 22nd January 1901.

In Staring Nights, Robert Abrams vividly describes the Queen’s final months, based on entries in her diaries. These diaries spanned most of her life, from her teenage years until a week before she died. In later life and with poor vision, she usually dictated her words to trusted family members, and after her death, most volumes were edited by her daughter Beatrice. Of the edited volumes, the Queen’s originals sadly do not survive. As Abrams acknowledges, we cannot rule out that the editing may also have interpreted some of the content. Nevertheless, the diaries are an invaluable resource, now digitised, transcribed, freely available and readily searchable (http://www.queenvictoriasjournals.org/home.do).

Abrams also gives insights into the professional and family life of Sir James Reid, the Queen’s physician who attended her in her final months. Except in childbirth, Queen Victoria did not permit any doctor to examine her physically, although she allowed an ophthalmologist to dilate her pupils with belladonna to examine her retina, peering around the edge of her cataracts. Faithful to this lifelong reticence, and with Sir James confident that she died from cerebrovascular disease, no post-mortem was performed.

The absence of a physical examination is one factor which brings into doubt Abrams’ assertion that Queen Victoria experienced a new episode of severe depression in her final months. Abrams can only cite her diary: ‘My appetite is completely gone and I have great difficulty eating anything’; but without further clarification, these symptoms could have been associated with psychiatric disorder, malignancy or some other physical cause.

Diurnal mood variation (worse in the morning) and early morning wakening, characteristic symptoms of depression, were not themes in the Queen’s diary. She tended to refer to pain disturbing her sleep. Ideas of self-blame and guilt were not evident in the diary passages cited and health worries may have been reality rather than hypochondriasis. She seemed able to take pleasure in some things and to appreciate kindness from others even at the very end. Despite her infirmities and bereavements, she appeared hopeful about the future. In November 1900 she wanted to ‘live and do what I can for my country and those I love’, and ill in bed, just three days before her death, she told Sir James that she wanted to live a little longer.  Her positive statements about living seem to contrast with those about wanting to die after the death of her husband, Prince Albert, many years earlier.

Abrams referred to many primary and secondary sources to contextualise the Queen’s life, but medical texts of the period were not among them. Reference to such sources may have altered his views on her state of mind. We have the Queen’s own words, and when the Queen’s diary recorded ‘I was very depressed’, Abrams comments that ‘it is fair to say that “depression” denotes in her mind serious levels of apathy and sadness.’  There are historical divergences, however. Although Abrams’ definition of ‘depression’ may be current today, 120 years ago ‘depression’ could have other meanings. Dr Daniel Hack Tuke in his Dictionary of Psychological Medicine (1892: available at www.archive.org) gave three uses of the word: mental depression or melancholia; nervous depression, ‘a morbid fancy or melancholy of temporary duration’; and vital depression, ‘fatal or very serious depression of the powers of life produced by a sudden shock, physical or mental’.

There are some additional unsupported assumptions and occasional errors in Staring Night. For instance, Abrams remarks on the possibility that Reid prescribed ‘chlorodyne, the latter a vestigial form of the sedative-hypnotic drug chloral hydrate.’ Chloral hydrate was a widely used sedative, but chlorodyne was a mixture of laudanum (opium), tincture of cannabis, and chloroform, a popular cure-all with multiple side effects. If Reid suspected mental depression as her primary diagnosis, it would have been more usual to prescribe a tonic, as recommended in Tuke’s Dictionary, ‘such as iron, quinine, arsenic, and strychnine, which tend to simulate the processes of digestion and of nutrition generally.’  Abrams does not discuss the implications of the lack of reference to tonics in relationship to the assumed mood disorder.

Abrams tends to interpret the concept of health through modern eyes when he considers the Queen’s over-eating and lack of exercise as health indicators. We must remember that the link between exercise and health was not established until much later, in the bus driver (sedentary) and bus conductor (on the go continually) study, which identified different rates of cardiovascular disease depending upon amount of exercise (Morris et al, 1953. Lancet 262 (6795): 1053–7). The significance of obesity also varied over time and cannot be judged by today’s western understanding. Obesity could be viewed as a sign of wealth and good health whereas thinness could be associated with the scourge of tuberculosis and the deprivation of urban poverty. Thinness rather than obesity was a public health issue. Victoria could not, therefore, be thought to have ‘neglected her health’ concerning weight and exercise.

Overall, Staring Night is an absorbing account of the last few months of Queen Victoria’s life, which I thoroughly enjoyed reading. The illustrations are excellent, and the appendices of places and personal names are thoughtful additions. The book would have been even better had the author concentrated less on modern interpretations of her health and situated it more within the life, death, medical and psychiatric culture of her time.  Read the book, then delve into the diaries online and add to the debate!