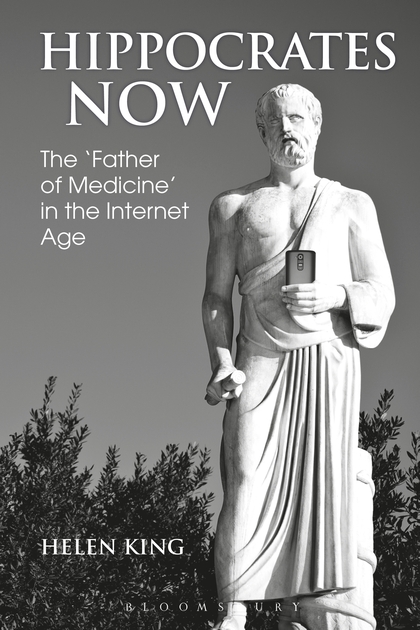 Medicine and the internet have always had an uneasy relationship, with ‘Dr Google’ regularly prophesising doom to any unsuspecting enquirer typing in their symptoms. For many years the academic solution was simple: avoid the internet as a source of knowledge! Don’t reference Wikipedia! Don’t use the Google search engine! But what has this achieved to stem the tide of misinformation? As Professor Helen King shows with a characteristically razor sharp focus, not a lot.

It may not be the usual course of action to use the internet as the main source of information for a history book, and one examining an ancient individual at that, but this is the focus of King’s work. As one of the leading authorities on the Greek physician Hippocrates, King is the perfect guide to have as we embark on an investigation that can best be described as digital anthropology. The focus is not on Hippocrates, or his alleged corpus of works, but instead on the reception of this semi-mythical figure in the internet age: ‘the extent to which the versions of Hippocrates that now surround us are specific to our age and its concerns’ (5). In this book, nothing and no-one is safe from King’s scrutiny; whether it be traditional medicine, clinical medicine, homeopathy, or simply Wikipedia editors. But it is all presented without scorn or judgement.

Chapter One draws upon King’s years of experience and research, scrutinising every single thing we know to be true about Hippocrates the man. Pouring over centuries of literary tradition, medical tradition, and numerous manuscript traditions, King gives us a clear and authoritative picture of what we can confidently say about the historical Hippocrates. It is two sentences long. King suggests that is too long in itself (19).

In Chapter Two, the historic tradition of Hippocrates is examined, revealing two very important points: first, Hippocrates is a malleable character in the source material, and second, this tradition of shaping him to our own end is much older than the internet. By unravelling the myths that surround him, King exposes basic questions, the answers to which we perhaps take for granted. We read about the Hippocratic Corpus, but what actually is a corpus? How did this one come to be? What is a treatise, and how do scholars try to identify an ‘authentic’ Hippocratic one? This question-based methodology lays the foundation for the rest of King’s study – the traditions are not in and of themselves automatically wrong, they just raise questions in need of answers. Answers they often fail to provide.

Having said that, Chapter Three is a simple exposition of how to reveal historical fraud. For those who are unaware of how sites like Wikipedia work, King guides us through the process of editing pages, and while peripheral to the main aim of this book, this guide actually demystifies the entire process. In so doing, she offers stories that are becoming accepted ‘facts’ on-line about Hippocrates that simply have no basis in the ancient material. Such Internet myths are not limited only to biographical anecdotes. By focusing on the supposed Hippocratic text The Complicated Body, King takes on the unenviable task of analysing the purpose of a completely fabricated treatise.

The authoritative power of Hippocrates’ name is laid out in Chapter Four, through an examination of his representation in the news. No element of his hagiography is safe: the title ‘father of medicine’; the alleged Oath that bears his name; the ancient Greek basis of hysteria. All are highlighted. All are problematized. Interestingly, what we begin to see through Chapters Three and Four is that Hippocrates is not just the go-to ancient hero for clinical medicine, but also ‘alternative’ medicines, anti-Pharma movements, and fad-diet creators to name but a few.

In Chapter Five, King hits upon an internet-wide problem: the reduction of people into quotes. Hippocrates is no different, and King focuses on two of the most prominent: ‘First do no harm’, a famous phrase that King admirably tries to offer a plausible source for (101-3); and ‘Walking is the best medicine’, where no such source is forthcoming (105-9). This historical fact-checking is not simply pedantry for its own sake. King regularly reminds us of its importance: ‘In a Hippocrates quote, his name as alleged creator become part of the quote, while users of the quote somehow incorporate into themselves his authority’ (100).

Chapter Six takes this examination further, through an exploration of perhaps Hippocrates’ most famous non-quote: ‘Let food be thy medicine’. Here we see the true plasticity of Hippocrates’ name and tradition. Whether it be clinical medicine articles, alternative medical practitioners, or even food producers and sellers, Hippocrates is offered as an unsubstantiated, yet unquestionable, authority for whatever it is they are trying to claim. Hippocrates is no longer a historical figure, he is a sales-pitch and a rhetorical device.

Finally, in Chapter Seven, King looks to the tradition of Hippocrates in holistic medicine. Hippocrates is shown to be as much the father of holistic medicine, rightly or wrongly, as he is the father of orthodox medicine, again rightly or wrongly. Notably, the use or misuse of Hippocrates is no different to the chapters before, and King’s even-handed approach to all forms of medical philosophy highlights this perfectly: ‘Everyone – in biomedicine and various branches of alternative medicine – wants Hippocrates on their team’ (152).

Overall, this book is as illuminating as it is entertaining. King offers a new way to explore knowledge and its presence on the internet. At a time when misinformation is rampant online, scholars and authors have a choice to make – engage with it or ignore it. King has gone for the former, and shows others how to go about it too.

Owen Rees is currently an Associate Lecturer of ancient history at Manchester Metropolitan University. He is also the founder of the fact-checking website https://www.badancient.com/.